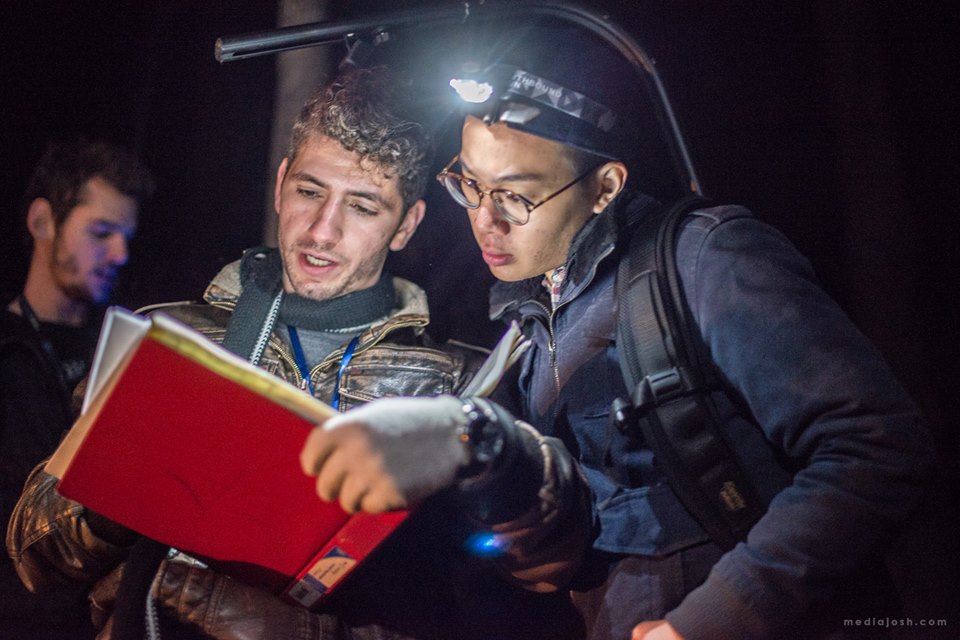 Not unlike terrorists who claim to fight in the name of Islam, Akram Shibly also uses a weapon. However, this Syrian-American’s weapon is one of peace and a tool to raise his voice to preach the truth about the great majority of Islam, something he has found quite difficult. A talented filmmaker, Akram Shibly wants to continue making narrative films full-time. He is intelligent and passionate enough about his faith to know he can be a positive voice for the world’s most popular religion (there are 1.6 billion Muslims). His goal is to combat the horrifying perceptions of his religion generated by a few thousand twisted radical jihadists, who do not represent the majority of Muslims.

Akram was born in Buffalo in 1993 to Syrian immigrants. At a young age, Akram’s father and mother taught him, his brother, and his sister how to think about world issues deeply and instilled Islamic pride into them by means of lessons from the Quran. His parents did this in order to make their children more well-rounded people, but his parent’s worst fears came to be when Akram decided to pursue a career in the arts.

“My parents are dentists, my brother is a lawyer, and my sister is a policy developer for YouTube, so I definitely feel like the black sheep sometimes,” said Akram, “But at the same time, I don’t think I could have chosen anything more in line with my family’s dreams and goals for me.”

Akram’s creative endeavors began around the age of ten, when he started writing Bionicle fan-fiction (Bionical is a Lego science-fantasy universe featuring part-organic, part-mechanical beings). He soon found himself as a writer for a team of animators who brought these fan-fictions to life.

His first time picking up a camera occurred 5 years later, at the behest of a school project. Instantly, he fell in love with filmmaking and began making goofy movies every chance he got. But it was something before then that made Akram realize the pen or the camera is mightier than the sword.

“Right after 9/11, a girl [classmate] comes up to me and says ‘You look like Osama Bin Laden,’ said Akram, “I always wanted to entertain, but, after that, I wanted to change the perception of Muslims as well.”

Even so, Akram stuck with goofy narrative films throughout high school. It wasn’t until he began attending University at Buffalo that his parent’s continuous preaching of thinking about world issues finally caught up with him, as he started applying socially conscious themes to his films. The first in this chronology would be his short film, Stalked. In the short, Akram plays a UB student haunted by the presence of someone stalking him via Facebook.

Around this time, Akram made the film Heal the World, which was the first of his films to be screened at a festival and the first to garner attention not just as one of Buffalo’s rising filmmakers, but as one of Western New York’s preeminent Muslim activists.

The film is only 3 minutes long, but its power can be felt by all of those who have seen it. Akram shot his cousin building toy sets until men in army boots walk through the set, destroying what the child has built. Throughout, those scenes are juxtaposed with actual news clips of a Syrian boy speaking of the destruction of his city.

In fact, it was news of the Civil War in Syria that served as the inspiration for the film.

“I used to visit Syria when I was a child with my family, it was like my second home, a Mediterranean paradise,” said Akram. The war, of couse, destroyed that paradise. “I’d feel the same way if Buffalo was invaded.”

The seed for the Heal the World was planted when his father decided to host a fundraiser to raise awareness for the growing conflict. After learning one of his cousins had perished during the conflict, Akram knew something had to be done.

“Everyone has that experience of playing as a child and the childhood experience was destroyed by soldiers in both narratives,” said Akram, “I wanted to bring the reality of what was going on in Syria to everyone who watched the film.”

Heal the World premiered at the fundraiser and when Akram saw the tears in many audience member’s eyes, he knew he did his job. The film went on to win honorable mention at the 2015 SUNYWide Film Festival in the Experimental Film category and helped raise $30,000 at his father’s fundraiser.

More importantly, it was the first time that Akram felt as if he had raised a voice toward Muslim-American issues.
“I had always participated in interfaith work,” said Akram, “but Heal the World was the first time I felt like I actually did something through film.”

Akram has also made several videos that are extremely critical of Arab world leaders and governments for their role in the crisis in the Middle East. A good example is one posted only days ago on his YouTube channel https://goo.gl/lNO24M.

Activism is something inherent in the Shibly family. His parents have traveled to the Middle East to aid in dental clinics and his brother is a spokesperson for the Council of American-Islamic Relations stationed in Tampa, Florida. So it is no surprise that Akram’s filmmaking track has started to follow this path.

Akram’s most notable film to date, Waiting at the Door, was the result of an opportunity his father gave him when he asked Akram to accompany him at one of the most crowded refugee camps in Jordan to volunteer at one of the dental clinics. Akram jumped at the opportunity to bring his camera equipment in an attempt to tell a story.

“Originally, my vision was to chronicle one refugee family,” said Akram, “but I was never at one place for an extended period of time [to do that].”

What he ended up with was twenty hours of stories from the Za’tari refugee camp, a puzzle that needed to be condensed into one cohesive narrative.

“I found the common narrative in the fact that these people are all in a state of limbo,” said Akram, “you have no home, you’re in a temporary engagement, no job, waiting for someone to recognize you and let you live again.”

Waiting at the Door won the Grand Jury Prize at this year’s SUNYWide Film Festival, screened for YouTube headquarters in Dublin, and screened at Google headquarters in San Francisco as one of the films that they turned to in an effort to promote their involvement with several non-profit organizations.

The film continues to be shown around the world, sparking conversations about the other side of Middle Eastern affairs. It has taken on a life of its own as an activist film. Much like Heal the World, he wanted to bring his audience into the events, rather than just providing a window to view it through.

“One of the pitfalls of film and media depiction is that they show things through a window, which creates a gap in the audience, a disconnect,” said Akram, “I wanted to bring this crisis to life.”

Despite this recent endeavor into activism, Akram’s goal is to create narrative films. The films that he has created thus far tend to have darker themes, focusing on the duality of a person’s character, something Akram feels is a hallmark of his.

“A good guy is rarely just a good guy,” said Akram, “there is such a rich history to why they got to be the people they are.”

Showing his Hitchcockian chops, one of his narratives, Ego, is a psychological thriller about an overall good guy who happens to inadvertently anger a homeless drunk and receives undeserved retribution. However, Akram believes that in these darker narratives, there is always a degree of hope.

“My films have had darker themes, something I have been trying to move away from, but at the end of them I try to show a ray of light,” said Akram, “it’s probably because there has been so much tragedy lately, but I don’t think people are bad at heart.”

Besides Alfred Hitchcock and his extremely supportive family, Shibly attributes his influences to two Muhammads: the Prophet and Ali, the greatest.

“This person saw so much persecution and grew up in such a backward time and continued to promote peace, things which led to repeated assassination attempts,” said Akram. “Much like him, I am looking to the people and trying to point them towards a path of righteousness.”

He deeply reveres the recently passed Muhammad Ali because he was a man of his convictions and spoke out at times where it didn’t seem right to speak out. Just as much, he admires him for his legacy.

“I just attended [Muhammad Ali’s] funeral,” said Akram, “it was rebellious for him to have done what he did, but to see how many people’s lives he touched is indescribable.”

As a film maker, this is what Akram one day hopes to achieve, to touch many lives and raise his voice to educate a western culture that wants to drown Muslims out.

The future holds much promise for Shibly: he is currently working on his first feature, wrapping his latest short set to be released this fall, and working on a follow-up to Waiting at the Door.

These future narrative films will contain more complex characters, something Akram believes represents the most growth he has done as a filmmaker.

All of his films are produced under his own production company, True Intent, LLC and can be found on his YouTube page https://goo.gl/mahjgd.

Apart from filmmaking, he is a writer for the Huffington Post and a part-time music producer and rapper. He garnered a substantial amount of attention for reaching out to Taylor Swift in a video asking her to speak out in support of the dire issue of war refugees being accepted and welcomed to the United States.

All of these things make Akram the person he is today. He’s a person who knows how easy it is to be unjustly labeled as some terribly negative stereotype.

“What I am doing is combatting Islamophobia and giving people a reason to be proud of who they are,” said Akram, “I don’t want to be put into a box.”