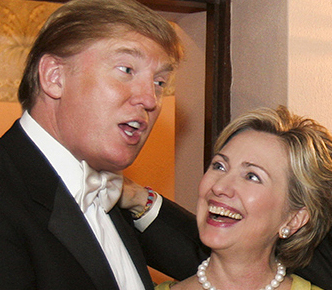 My election predictions are not primarily based on the polls. When I picked John Kerry to win the Democratic nomination in 2004, he was I think fourth in the polls and had mortgaged his house. When I picked Trump as a possible nominee in early July of last year, he was fourth or fifth in the polls. Instead, I look at all of the facts and make a judgment based on decades of experience watching the American electoral circus.
The mainstream media, which I now call Pravda, has, for the tenth time, pronounced Trump dead. I am not convinced. Calling them Pravda may actually be an understatement. Most people knew Pravda was a pack of lies spewed out by the regime. Many still think the MSM is legit. However, it is clear to me they are basically the public relations arm of the Clinton campaign.
Let me give you two examples. When Mr. Khan waved the Constitution, did any reporter ask him why he did so? If they did, I missed it. Now, it really doesn’t matter what the answer would be, whether plausible or baseless. The point is this: it never occurred to Pravda to even ask the question because somewhere deep in the recesses of their minds, they may have realized that the answer might help Trump, a violation of the prime (unspoken) directive.
Another example. I must have heard a hundred times that “Trump attacked a Gold Star family.” But I struggle to recall seeing any video of this attack. I’m not saying the video does not exist and I’m not even saying it hasn’t been aired. I’m just saying that Pravda’s characterization of the video is ubiquitous yet Trump’s own words are scarce. I have seen a video where Trump says, in substance, I was viciously attacked and I responded, a perfectly reasonable reply. His actual words may be obnoxious; however, Pravda would rather summarize them than air them.
Now, Trump’s poorly organized campaign, verbal gaffes and lack of focus on key issues has [have] made Pravda’s job much easier. In a year when the Libertarian candidate is being taken seriously, at least by Pravda to help Hillary, Trump has ignored the libertarian swing vote, about ten percent of the population. Trump is basically a non-ideological pragmatist but he could at least hire an adviser to help him reach out to this critical segment of the electorate. Instead, he has gone out of his way to surround himself with warmongering neocons, at no particular advantage to his campaign. Whatever happened to American First? Trump has reportedly turned down offers to speak at African-American events. That’s called shooting yourself in the foot. Donald, politics, war and sports all teach this important lesson. You rarely win playing defense. As the Latin proverb advises, “Fortuna audaces iuvat,” “Fortune favors the bold”. Attack, always attack.
In spite of all this, the basic numbers are not that bad for Trump. Hillary is at 47.6% in the Real Clear Politics average. That’s below what she needs in a two-way race. Her numbers in swing states are even lower, except for Pennsylvania, 49.4%. She is under 42% in Michigan of all places. You hear little of this on Pravda.
Here’s the critical question: who is going to suddenly discover that they like Hillary, a fixture in our lives since 1992? I am betting very few. No one knows this better than Hillary’s staff. Hence, their clever strategy has three prongs: (1) have Hillary say as little as possible, minimize appearances because no one shows up anyway, and avoid questions at all costs except with friendlies; (2) hammer Trump constantly and brutally, with the assistance of Pravda; and (3) boost Gary Johnson’s candidacy in the hope of splitting the vote. On point (3), don’t be fooled by polls showing he costs Hillary too. Hillary’s brains are assuming those are just progressive protest votes that will rejoin Hillary when it gets to crunch time. Another segment of Johnson supporters, actually libertarians, will either vote for Gary, vote for Trump or stay home. Those folks are more likely to vote for Johnson if he is treated as a serious candidate by Pravda. They will not vote for Hillary.
A third serious candidate helps Hillary because the core Democratic constituency is quite firm and rarely travels elsewhere: net tax consumers and supporters of abortion, gay rights and open borders. They will generally not waste their votes on a sure loser. Remember, these are people who vote for a living. They need to win. They will stay with Hillary and give her a floor of about 48%.
Those who haven’t already signed on to Hillary will probably drift to Trump. The election will ultimately be decided by the four or five percent of the voters who make up their minds at the last minute. Usually, these are the least informed and least ideological voters. They will tend to choose the more charismatic and telegenic candidate and we all know who that is. That’s why I am sticking with my prediction of several months ago. Trump, 52%, Hillary 48% (counting only the major party vote.) I expect Johnson and Stein to be ignored in the last few weeks and fade. Neither of them is Ross Perot and besides, Trump already has the Perot vote locked down.

Jim Ostrowski is a trial and appellate lawyer in Buffalo, NY. He is CEO of Libertymovement.org and the author of five books including The Impeachment of Barack Obama and Hillary Clinton for High Crimes in Syria and Libya (2016), with Michael Ostrowski.