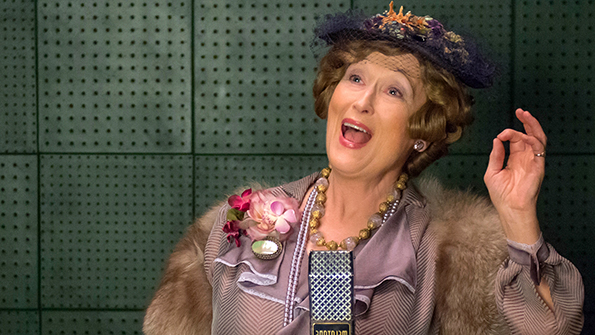 Musical theater and opera fans, familiar with the incomparably horrible and unintentionally hilarious singing of Florence Foster Jenkins (1868-1944) have been waiting with guilty anticipation for the release of Florence Foster Jenkins, the new film directed by Stephen Frears, in which Meryl Streep plays the delusional Manhattan socialite. The film follows the events leading up to Mrs. Foster’s legendary 1944 Carnegie Hall concert.

To say that this film exceeds my expectations in the most delightful ways would be an understatement. I fully expected a daftly inspired performance by Streep, and she certainly delivers. In the directorial vision of Stephen Frears (The Queen, Philomena, My Beautiful Laundrette) and under the cinematographic eye of Danny Cohen (The Danish Girl), New York City of 1944 looks glorious — sophisticated and posh.

The great delight of the film, however, is the surprisingly engaging, emotionally powerful, and unexpectedly astute script by Britain’s Nicholas Martin.

Previous treatments of the Florence Foster Jenkins story have presented her almost entirely as a joke.  There have been a number of stage adaptations of her life, most notably Souvenir by Stephen Temperley, which featured Judy Kaye in New York in 2005; and Glorious! by Peter Quilter, which opened in London in the same year, and was nominated for the Olivier as Best Comedy. I have seen both of these – including local productions in which Mary Kate O’Connell, interestingly, played Mrs. Jenkins both times. These scripts both treat Mrs. Jenkins comically, before ending sentimentally.

In his film script, however, Mr. Martin gives us something far greater as he explores the complexity of a woman who had been a musical prodigy in her youth – she actually played a recital at the White House for President Rutherford B. Hayes when she was seven — but whose life of tragic disappointments takes her far from the musical career she once envisioned.

Martin includes references to two disturbing turnabouts in Mrs. Jenkins’ life: her father’s refusal to support her musical aspirations, and her subsequent and perhaps consequent marriage to Dr. Frank Thornton Jenkins, from whom she contracted syphilis on her wedding night.

I recall the first time I ever heard the voice of Florence Foster Jenkins. It was at Footlight Records on 12th Street in Manhattan in the early 1980s.  Before the Internet, there used to be record stores, and Footlight reigned supreme in catering to musical theater and opera lovers. When you walked into the store, there would always be a record playing, and maybe a Broadway star or two thumbing through the vinyl. On this particular day, Liza Minnelli was there in search of a copy of her own recording of “Best Food Forward,” and the featured recording was a reissue of eight of Mrs. Jenkins’ only professional recordings, ironically released under the title, “The Glory of the Human Voice.”

As I entered the store, Jenkins was massacring “Queen of the Night,” earnestly striving to hit notes, but missing, and always with the deepest emotional intensity.

“Florence Foster Jenkins” he replied. “She was a New York socialite in the 1940s.”

“Is she going for laughs on purpose?” I asked.

That was my introduction to the truly fantastic world of Florence Foster Jenkins.

Despite the palpable and undeniable comedy implicit in a woman who is possibly the worst singer in the world believing that she is Nellie Melba and Amelita Galli-Curci, all rolled into one, the trajectory of this film is entirely serious. Mrs. Jenkins emerges as a heroic figure, determined to experience life’s joys and to share those joys with others, despite the raw deal life has dealt her.  Adding to the dignity of the character, on the surface she seems to be a shallow and over privileged dilettante; her suffering is entirely private.

While others have zeroed in on the inescapable sentiment of the film, I was quite taken by Martin’s deft insertion of a few notable scenes that expand and deepen the story.

One sequence in particular resonates powerfully. Florence’s devoted but unfaithful husband Saint Claire is off playing golf with his girlfriend for a few days, and in her loneliness, Florence pays a visit to the humble apartment of her accompanist, Cosmé McMoon. She shares the story of her early musical promise with Cosmé, and explains that her aspirations evaporated along with control of her left hand. Unknown to Cosmé, this is the site of her initial syphilitic chancre.  The two then play a piece on the piano together, beautifully, Florence using her right hand, Cosmé using his left. It is a tremendously moving moment.

We are at several moments reminded of Florence’s uncommon vigor and resolve.  At one point, she is feeling ill. Her usual physician is unavailable and his colleague arrives. Inquiring about her illness, she confirms his suspicion.  As he leaves, the doctor confides in Saint Claire that he has seen patients survive the disease for ten and even twenty years, but never fifty. He marvels at Florence’s strength.

Small moments like these serve to amplify this film above and beyond any treatment of Florence Foster Jenkins I have ever seen before, or any I might have contemplated.  Whereas Streep has been praised for her performance elsewhere, as has Hugh Grant, who gives a brilliantly compelling performance as Saint Claire, I would add to the discussion praise for a truly marvelous and nuanced performance by Simon Helberg as Cosmé McMoon. This is a turn worthy of an Oscar nomination, by an actor best known for television’s Big Bang Theory. The role is exquisitely crafted by Martin and directed by Frears.

McMoon is an aspiring young musician, whose fortunes are forever altered by his association with Madame Florence.  Watch for the captivating scene in the crowded elevator of the Hotel Seymour after McMoon has played his first rehearsal for Mrs. Jenkins.  He has just begun to realize what he has signed on for, and laughter begins to escape, uncontrollably from his body. At every point, Helberg communicates the conflicted nature of McMoon’s situation, as he sees his own serious aspirations disappear, yet gets to play at Carnegie Hall; and as he discovers that he simultaneously loves, fears, and worries for his patron. This is a great screen performance.

Broadway’s Nina Arianda (Venus in Fur, Born Yesterday) also appears in the film as the Ruyonesque floozy wife of a social climbing devotee of Florence. In one endearing, but fictitious moment, it is she who convinces the rowdy servicemen who attend the pivotal Carnegie Hall concert to cheer, rather than deride Madame Florence.  Swedish actress, Rebecca Ferguson, is excellent as Saint Claire’s girlfriend.

By looking to the reasons for, rather than stopping at the hilarious result of Mrs. Jenkins’ delusions about her musical talent, Florence Foster Jenkins rises above all previous treatments of this story.  The film is a beautiful tribute to the power of music to heal, and the resilience of the human spirit itself. 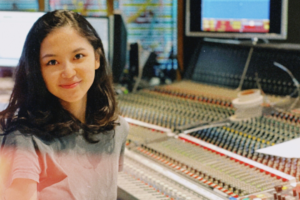