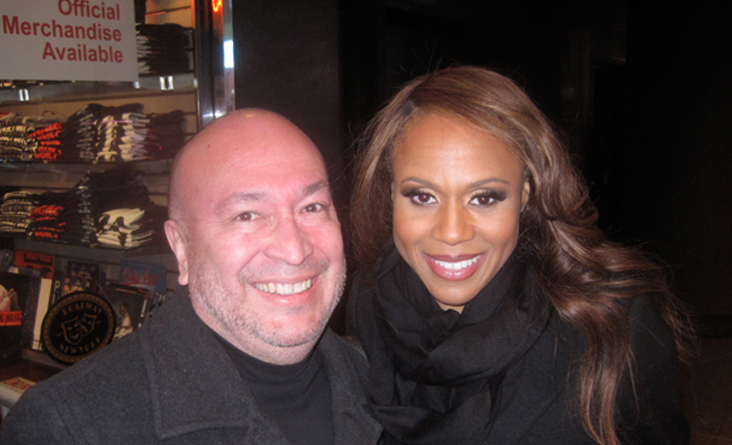 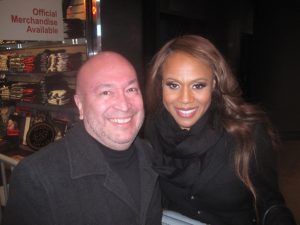 The fabulous Deborah Cox (pictured above) is getting ready to star in the national tour of the new musical The Bodyguard, which is based on the film of the same name that starred the late Whitney Houston. The tour kicks off at the Paper Mill Playhouse in Millburn, New Jersey on November 25th prior to an official tour opening in Minneapolis in January. Back in May, at the Asolo Rep in Florida, Cox starred in the new musical Josephine in which she portrayed the legendary performer Josephine Baker. Plans were for Josephine to go to Broadway in the 2016-17 season. A native of Toronto, Cox has previously starred on Broadway in the musicals Aida and Jekyll & Hyde.

Up next for American Repertory Theater of WNY, How to Make Friends and then Kill Them by American playwright and actress Halley Feiffer. Directed by Maura Nolan, the production will star Melissa Levin, Sue McCormick, and Mara Westerling-Morris. The production opens on October 27th and is scheduled to run through November 19th, a day before Feiffer’s 32nd birthday. The daughter of renowned satirist and cartoonist Jules Feiffer, Halley won a Theater World Award for making her Broadway debut playing one of the nuns in the 2011 revival of The House of Blue Leaves. She is currently appearing in the starry revival of The Front Page opposite Nathan Lane, John Goodman, and Robert Morse. Her play A Funny Thing Happened on the Way to the Gynecologic Oncology Unit at Memorial Sloan-Kettering Cancer Center will open at MCC Theater in New York next spring.

In case you missed the news this summer, playwright Peter Shaffer died this past June at age 90. By coincidence, the Irish Classical Theatre had announced two of Shaffer’s best known plays for its 2016-17 line-up. Coming up next at the Andrews Theatre (October 28th-November 30th) Shaffer’s 1973 play Equus, directed by David Oliver, starring Vincent O’Neill, P.J. Tighe, Margaret Massman, Wendy Hall, Kelsey Mogenson, Steve Jakiel, and Dudney Joseph.  And in January, for three performances only, the company will present Shaffer’s 1980 play Amadeus, about the lives of composers Wolfgang Amadeus Mozart and Antonio Salieri. The production will be staged at Kleinhans Music Hall while the Buffalo Philharmonic Orchestra performs Mozart’s music under the direction of JoAnn Falletta.

Speaking of Mozart, as part of its 2016-17 season, Shea’s 710 Theatre will present the award winning one-person play The Other Mozart, written and performed by Sylvia Milo. The play is about Nannerl Mozart, the sister of Amadeus, a prodigy, keyboard virtuoso and composer in her own right. The play runs May 4th-7th.  The Shaw Festival’s season may be coming to an end (A Woman of no Importance closes October 29th; Engaged closes October 30th) but their acclaimed production of Mrs. Warren’s Profession which closes October 23rd, will transfer to 710 Theatre for a run November 3rd-13th.

Jimmy Janowski’s play The Birds Attack! will open this week in Wilmington, North Carolina, produced by Big Dawg Productions. The play was first presented by BUA in 2011 and then remounted in 2013.  Both Janowski and BUA return to their camp roots for the company’s 25th anniversary season with Charles Busch’s latest play, Cleopatra. The production will open in March under the direction of Todd Warfield, starring Michael Seitz, Maria Droz, Tim Finnegan, Guy Tomassi, Adam Hayes, and Bebe Bvlgari. Janowski will portray the title character.

Broadway star Tom Hewitt (pictured below)  who was seen in Buffalo last week in the musical Finding Neverland at Shea’s, stopped by to visit company of  Matthew Crehan Higgins’s new play Christmas in July and wish them well on their opening night. Directed by Lisa Ludwig, the production also starts Kevin Craig, Michael Seitz, Kurt Erb, and Marc Sacco. Hewitt was nominated for a Tony award for playing Frank ‘N’ Furter in the 2000 revival of The Rocky Horror Show. He was also in the original cast of Paul Rudnick’s Jeffrey in 1993. 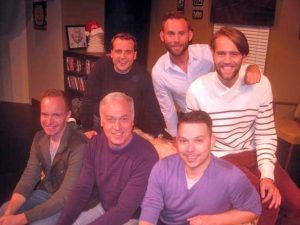 THEATER | ON THE BOARDS
Hochul to Delaware North?