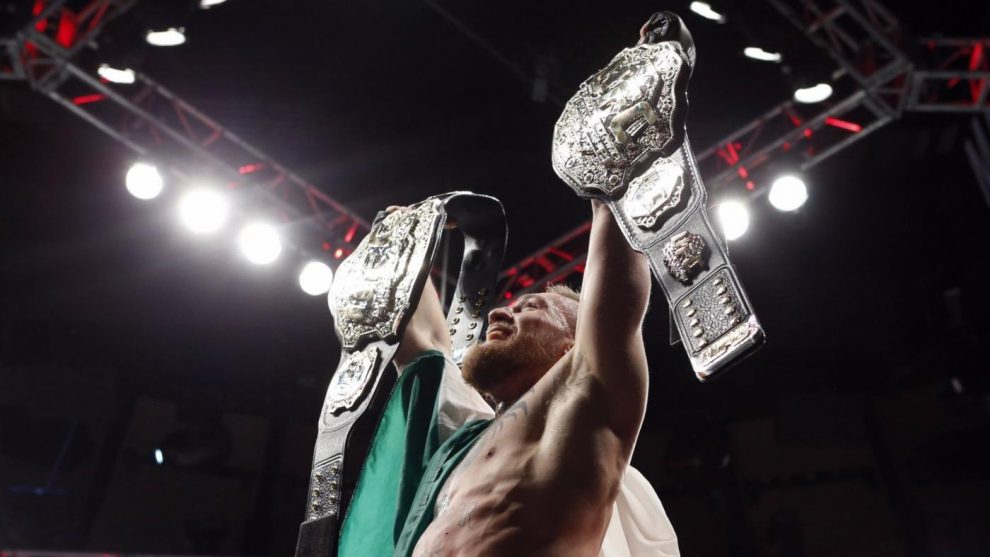 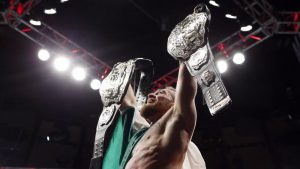 The UFC’s road to Madison Square Garden (MSG) was a long and arduous one. For UFC President Dana White and company, it was all worth it in the end. The “end”, was the legalization of MMA in New York State, defeating what White calls “dirty politics”. The “end”, was White sitting in front of the press, post-fight, announcing that UFC 205 just “broke every record in UFC history” including a gate – revenue from attendance – of $17.7 million, a UFC and MSG record. “Jesus is going to have to fight the devil to beat that record”, said White, in a way that only he can. The “end” is the company’s biggest start, Connor McGregor, one of the most famous athletes in the world, sitting atop the Octagon now the first ever 2 division champion in UFC history, with both the 145 and 155 pound belts over either shoulder.

The highlight of the night was the highly touted matchup between 145 pound champion Connor McGregor and 155 pound Champion Eddie Alvarez for the 155 pound title. The fireworks and trash talking that built up to the champion vs champion showdown made it one of the most anticipated fights in company history. The fight itself however was a total mismatch, with McGregor dropping Alvarez 3 times in the first round alone to ear piercing chants of “Ole! Ole! Ole!” and “Connor! Connor! Connor!” from the Irish fans – thousands of whom not only took over the MSG lobby w their flag waiving, Irish songs, and chanting, while hundreds more even created a mob scene when they followed current UFC 185 pound champion into a Madison Square Garden bathroom, packing the men’s room shoulder to shoulder as they jumped up and down chanting his name “Bisping! Bisping! Bisping!” as he answered natures call while pumping one first in the air to the chanting. 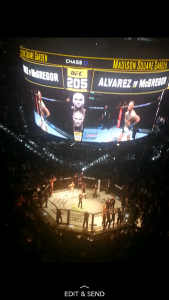 The writing was on the wall for Alvarez as the first round ended, as only 1 UFC fighter has ever survived being dropped 3 times in one round. This only further emboldened the heavily Irish crowd. It was not the prediction of Mystic Mac, as McGregor is known – for his ability to predict the round and fashion in which he will finish his opponents – In fact it was McGregor’s head coach, John Kavanagh, who had predicted this one to be ended by McGregor knocking out Alvarez “around the 8 minute mark” or 3 minutes into the second round. The fight was stopped by referee “Big” John McCarthy after just 8 minutes and 3 seconds.
Celebrating his victory and achievement of becoming the first ever 2 division champion in UFC history, with a belt over each shoulder, many were left to wonder what is next for McGregor. Will he defend his 145 pound title against interim champ Jose Aldo, or against hugely popular top ranked contender Frankie Edgar? Will he stay at 155 pounds for the time being and defend his title against number 1 ranked challenger Khabib Nurmagomedov and his perfect 24 – 0 record? A fight many fans want to see, particularly after Nurmagomedov – also never one to mince words – putting a mauling on top ranked opponent Michael Johnson earlier in the evening and then calling out McGregor and taunting his fans. “I want to fight your chicken. Let’s go with your chicken!” said Nurmagomedov about McGregor, who Nurmagomedov feels has been avoiding a fight with him. President Dana White –who sits at octagon side for the fights – when asked at the post-fight press conference about Nurmagomedov’s in-ring comments, said “he was screaming at me in between every round ‘give me that f@*ing belt!’ I was like ‘finish this fight first.’” 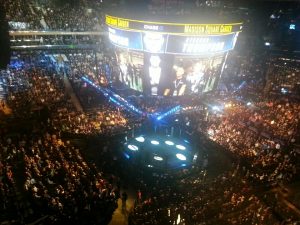 When “The Notorious” Connor McGregor is on the card though, no one steals the show, and no one out “McGregors” McGregor. Only Connor, himself, can out do himself. And, if that’s possible after a night like this, out do himself he did.
McGregor’s late night appearance at the 205 post fight press conference did just that. After avoiding the question of his highly anticipated “big announcement” during the in –ring interview, he was asked again at the post fight press conference. With his family seated in the back of the room, McGregor finally acquiesced, “Well there’s a few bombshells I wanted to hit. One announcement, I’m going to be a daddy early next year.” McGregor let out, to the shock and applause of the room. “They’ve got to come talk to me now. No one has come talk to me since the sale [of the UFC]. I’ve got a family to think about now. I mean who owns the company now? People have shares, celebrities. Conan O’Brian owns [a piece of] the UFC now. Where’s my share? Where’s my equity? I’ve delivered. I’ve shown them the money. You want me to stick around? You want me to keep doing what I’m doing? Then let’s talk. I want ownership now. So there’s a little announcement for you.” 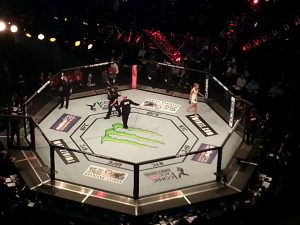 It’s easy to see how the UFC’s arrival is a boom for any local economy, New York City included. It’s of particular interest then, to experience what a live event would do for Buffalo. A recent article announcing a UFC event in Buffalo was quickly retracted by the Buffalo News. A representative for the UFC tells Artvoice that it was “just a miscommunication” and that “they jumped the gun on something we are still working on. Nothing is official yet.” It’s clear thought that something of the sort is in the works.
Keep it locked in here for more as that story develops.