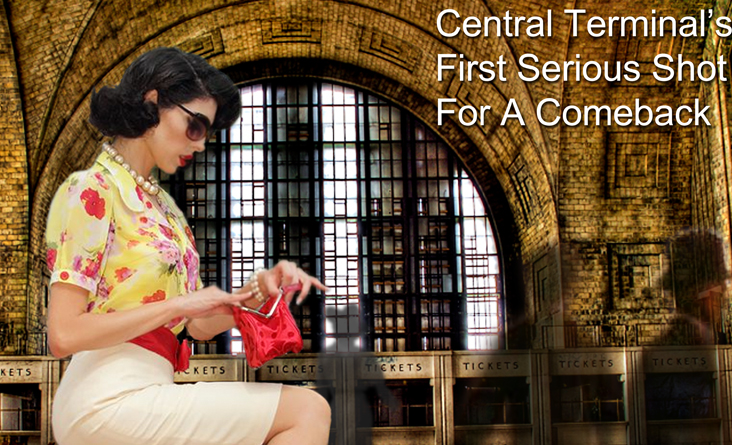 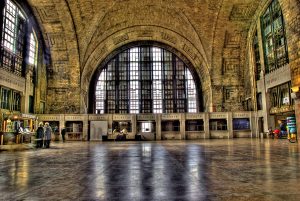 On October 28, 1979 the Lake Shore Limited passenger train pulled out of Central Terminal and headed to Chicago. That was the last train to leave the station and for the next 37 years the once magnificent 17-story art deco Central Terminal was variously abandoned, stripped, looted, vandalized and ignored.

There were small bubbles of hope for the building through the years that turned out to be either fruitless or damaging. Local builder Anthony Fedele purchased the building in 1979 for $75,000 with plans for a 150-room hotel. Fadele loved the building, tried his best to care for it and even moved into it. Unfortunately, Fadele had dreams but no money and when he defaulted on back taxes on the terminal a bankruptcy court foreclosed on it. When Thomas Telesco bought it at auction in 1986 for $100,000 there was hope he would do something with the building. He did. He sold as many architectural artifacts and any items of value he could scavenge during his brief ownership. The building was subsequently acquired by Bernie Tuchman and his uncle Samuel Tuchman, who proceeded to move full throttle selling anything that could be removed including ceiling lights, iron railings, signs, mailboxes, everything. Even the enormous, well-known Central Terminal clock that dominated the station’s interior showed up on eBay. Since the building was unsecured it also suffered severe weather damage and gross vandalism, breaking windows, arson, graffiti, etc. The only thing saving it from being torn down was probably the $12 million price tag to do so and that it had been put on the National Register of Historic Places.

When the Central Terminal owners were done looting the building they finally responded to the growing volume of complaints from Buffalo’s preservationists and sold the building in 1997 to Scott Field of the Preservation Coalition for $1. The Central Terminal Restoration Corporation (CTRC) was formed soon after and they’ve spent the past nearly 20 years struggling to stabilize the building. However, the CTRC does not have and will never have the money needed to restore Central Terminal. While numerous ideas have been floated of what to do with the building, a casino, a Tops Supermarket warehouse, a hotel and blah, blah, blah… it’s all been talk and no cash. Furthermore, the CTRC board has been notoriously dysfunctional, even earning an acidly slamming and lengthy article by Charlotte Keith for Investigative Post.

Most recent for Central Terminal is a proposal by Toronto developer Harry Stinson to redevelop the Terminal into a mixed-use facility, building townhouses in the surround neighborhood and possibly restoring train service. However, a few months ago a new and powerful development occurred which could really change everything: public money, a lot of public money. What follows is an excerpt of quotes from a long conversation with congressman Brian Higgins.

The idea of taking a serious look at Central Terminal as a multi-modal transportation hub for Buffalo came after published reports about the roof collapsing for the second time at the Amtrak station on Exchange St. Anybody familiar with that station knows it’s isolated, ugly, small and situated under a viaduct. Looking around the rest of the state we saw that Utica, Albany, Syracuse, Niagara Falls and Rochester had all built new train stations within the past decade.

Buffalo’s share of the federal money that financed train stations in those cities went to returning cars on Main St., which was a good investment. You look at Main St. now, the area where the Hyatt is for example, and you see new restaurants, new residential, new viability. That’s a direct result of increased activity from returning cars to Main St., so that investment wasn’t a mistake.

Of course, revitalizing the Central Terminal has been talked about for years. What’s different now is the State of New York has earmarked $25 million for a new Amtrak station in Buffalo. It’s a five-year Department of Transportation capital plan and that money will be available next year. The state money would likely be matched by federal dollars if the state applies for it, so we’re looking at $50 million for a new station.

The governor has issued a challenge to the city to spend the next six months looking at the sites available for a new Amtrak station and he’s pledged up to a million dollars to facilitate that process. The mayor has appointed a committee, I’m on it, some of the members of the state legislature are on it and Robert Shibley from UBs school of Architecture and Planning is the facilitator of this process. What the process will do is provide a cost benefit analysis of the sites after which a decision will be made by the CENTRAL TERMINAL continued…

committee which site should be pursued.

like a lot of people my initial thinking was that’s where we want people to disembark from a train when they come to Buffalo.

But when you further consider it you have to ask why are you stuffing a train station into Canal Side? A train station is not water dependent or water enhanced and Canal Side is already an attractive and sought after development site with plenty of room for other opportunities that can actually use and compliment the waterfront. There’s also the issue of parking and crowds. There are often concerts with up to10,000 people and other events happening simultaneously sometimes and now we’re going to throw a train station in there, too?

The more I looked into it the more I was convinced we should take a serious run at Central Terminal instead. It’s a beautiful piece of Buffalo architecture that could be restored. There’s plenty of parking. The building is large enough to house a multi-modal transportation hub. Plus if you want a train with direct access west to points like Cleveland or Chicago the track at Exchange or a track at Canal Side can’t access points west, you have to go to the Depew station for that. Central Terminal has complete access to tracks going north, south, east and west.

Multi-modal transportation hubs are the trend not only in cities across America but all over the world and Central Terminal is large enough that it could facilitate a new Amtrak station and also accommodate moving the downtown bus station into the building. There’s plenty of room for tour buses and taxicabs, too.

We would need a master plan which would determine what parts of the building would be utilized for a new train station, what parts utilized for a bus station and what portion would be available to a private developer to develop mixed use commercial and residential projects.

You have developers who had been interested in that property previously, credible developers, who would be encouraged to take another look at it given the potential for at least $25 million in public investment and likely $50 million assuming the state applies to the fed for matching funds. Talking to developers who have successfully completed projects in Buffalo, including downtown Buffalo, including Niagara St., they believe there is great potential for residential in the Central Terminal towers, in addition to commercial and office space

One area of resistance to Central Terminal is a perception of an area that is unsafe. It’s not unsafe; it’s inactive.  When you have an area that is inactive people quickly associate it with being unsafe. The real plan should be to try and inject new viability into a neighborhood that’s been forsaken and when you look at the Central Terminal it has great potential and that neighborhood has great potential as well.

I’ll give you an example. From Central Terminal to City Hall it’s 2.6 miles, a straight shot down Broadway. The distance between downtown Buffalo and Larkin Exchange building is 2.1 miles.  In essence what Howard Zemsky did with Larkinville is expand the boundaries of downtown Buffalo. So where 20 years ago the Hydraulic Neighborhood, which is now Larkinville, was perceived to be isolated and distant from the downtown core, it’s no longer perceived that way. Essentially the downtown core has been expanded, similar to when separate beads of water touch and become one larger bead of water. So what we should really be looking for is that opportunity with the Central Terminal, Broadway-Fillmore neighborhood as part of an overall redevelopment strategy.

We have an opportunity for significant public investment and public investment supports private investment. We just remade a 1.1-mile stretch of Ohio St., replacing an old broken industrial roadway with an award winning parkway design. Carl Paladino, who owned property there for 25 years then decided to invest and create 21 units of high-end apartments. At the same time Sam Savarino moved on developing 78 units of luxury apartments. The point is when you do the infrastructure investment that will unleash the resources and creativity of the private sector.w

With this project I believe that the more information that is available relative to the viability of redeveloping the Central Terminal the more realistic it becomes. I have publicly expressed support for it, NY assemblywoman Crystal Peoples has expressed support for it, and state senator Tim Kennedy and assemblyman Sean Ryan have expressed support. That’s important, why? Because this is not a city project. This is a project whose first money is the state of NY and when you have three members of the state delegation supporting the Central Terminal it means something

20 years ago Daniel Patrick Moynihan secured $1.5 million federal grant for the Central Terminal and the money was used to replace the roof. Had that not been done we would not be having this discussion. Moynihan had the presence of mind to know that that money was not going to restore the building but at least it extended the viable life of the building for the next generation to come along and perhaps do something about it.

Are we going to do something?

Central Terminal is like the grandmother of the east side, the queen of Polonia, who has been lying in a sick bed for 37 years. She’ll either move to her deathbed or get back on her feet. The only thing that has prevented her from getting on her feet has been money and ideas. Both of those seem to be within reach today. 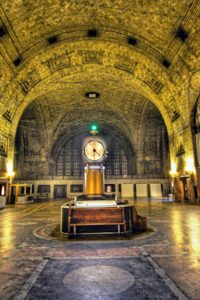 NEWS OF THE WEIRD
HIT LIST of Entertainment This Week