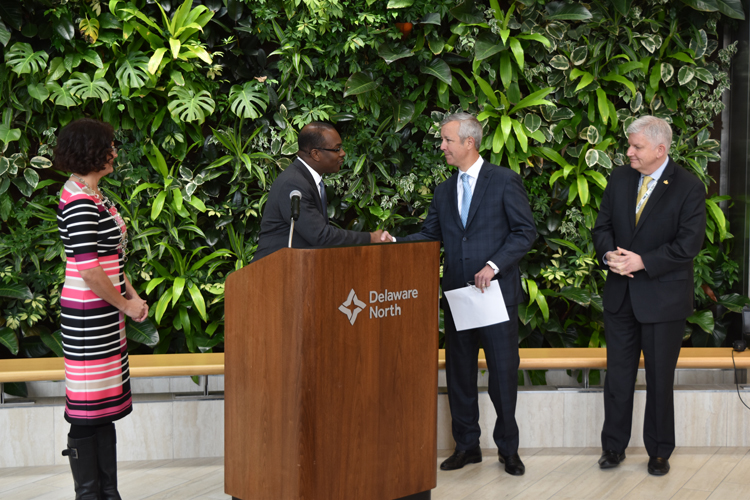 By James Hufnagel;
Last week Lou Jacobs, co-CEO of Delaware North, pledged $300,000 to Buffalo Olmsted for various purposes such as fighting the invasive emerald ash borer, sponsoring a community lecture series, planting and maintenance of new trees and directing a small subsidy to the city’s Summer Youth Program.
Delaware North owner Jeremy Jacobs, Lou’s dad, has a net worth of over $4 billion, according to Forbes Magazine’s top 400 Richest Americans list. The $300,000 will be metered out in three $100,000 payments from 2017 to 2019.
Besides the tax write-off Delaware North will receive from their $300,000 expenditure, the Buffalo News and Buffalo Business First both wrote it up. Local public radio affiliate WBFO-FM reported the story during drive time. Delaware North and Buffalo Olmsted each issued press releases and posted it on their websites and Facebook pages.
Was the unstated purpose of this charitable gesture by Delaware North and the Jacobses meant to encourage the ongoing silence of Buffalo Olmsted when it comes to the former’s blatant violation of the Olmsted plan for Niagara Falls State Park?
Delaware North maintains Top of the Falls restaurant, Cave of the Winds food pavilion, several snack booths and souvenirs stores scattered across the scenery, violations which became the subject of public notice recently with Gov. Andrew Cuomo’s announcement that he intends to build a 100-room “lodge” on Goat Island in the park, most likely for Delaware North.
Olmsted, in describing his plan for the Niagara Falls State Park, wrote about the prohibition of commercial enterprises as one of the cardinal principles of his plan.
Referring to the intrusion of a restaurant, he wrote, “If [the park] were a commercial undertaking into which the State was entering, in competition with the people of the village of Niagara, it cannot be questioned that the restaurant could be made a profitable branch of it, But… it is to be considered that no (restaurant) can be built upon the island that will not in some degree dispossess, obscure and disturb elements of its distinctive natural scenery.
“The question, then, is, will the absence of places of refreshment cause such hardship to visitors, with the general enjoyment by the public of the scenery? It is a sufficient answer to say that there is no point in the Reservation at which a (restaurant or food booth) can be placed that is more than ten minutes walk or five minutes drive from hotels and restaurants standing on land of private ownership.”
According to Olmsted, Delaware North’s food service empire doesn’t belong in Niagara Falls State Park. While it ensures that the reportedly eight million tourists who visit here every year have little reason to patronize establishments in the city of Niagara Falls, which suffers from one of the highest rates of per capita poverty in the state, it also mars the scenery and spoils the opportunity for ‘pensive contemplation’ Olmsted said he sought with his plan for the first state park in the USA.
Now Cuomo wants to build a hotel in the park. It should be opposed by the very people who have adopted Olmsted as their namesake.
Accepting $300,000 must make it hard for Buffalo Olmsted to take issue with Delaware North or Cuomo on this latest incursion on Olmsted’s hallowed grounds.
Delaware North’s corporate logo appears on Buffalo Olmsted’s web site and its monthly newsletter, where it is lauded as a “Major Sponsor” and is credited with providing “Generous Ongoing Support”.