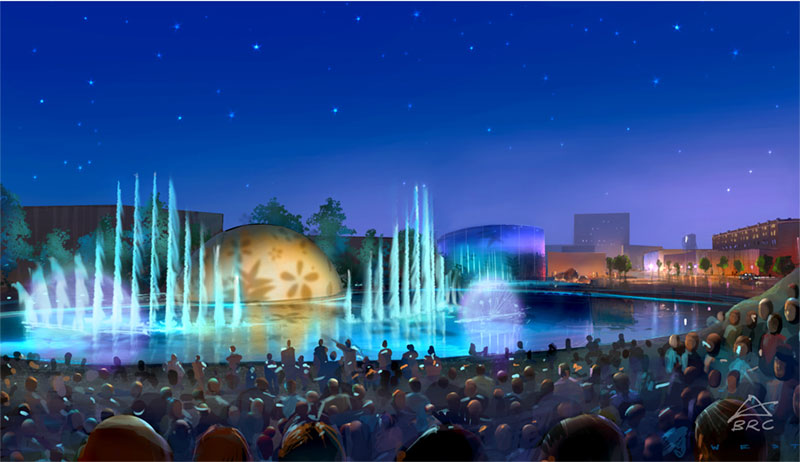 If there were any remaining doubts in anyone’s mind that the proposed Niagara Lodge on Goat Island in Niagara Falls State Park is earmarked for Jeremy Jacobs’ Delaware North worldwide empire, what follows should dispel them. Several other images depict the Niagara Experience Center, but it’s the two hotel images that are most significant.

The images were created by a company called BRC Imagination Arts of Burbank, California.

According to its website, BRC “is an experience design and production agency that ‘Turns Brands Into Destinations’. For over three decades, many of the world’s most iconic brands and cultural institutions have asked us to bring their stories to life and create unforgettable memories for their guests.”

Clearly, Niagara Falls State Park will soon be added to that list, if USA Niagara, Delaware North and BRC have anything to say about it.

To summarize: A subsidiary of a New York State government agency, USA Niagara, has utilized two watermarked images created by a private company, BRC, which has worked previously and closely with Delaware North to establish a major (1.5 million visitors a year) tourist attraction, the Kennedy Space Center, to promote a controversial hotel project in the Niagara Falls State Park long before any official public hearings or comment periods have been held on the matter.

Delaware North, USA Niagara, or both, engaged BRC to create images of the future development in the state park.

Again, USA Niagara, a government agency, on one of its official websites, slyly adopted and displayed the work of a private company with a direct interest in the outcome of the Niagara Lodge issue.

Forgive us for saying so, but it certainly appears as if BRC and Delaware North are way ahead of us on this game.

Was BRC paid for the two images? What else has BRC, or Delaware North for that matter, done to lock down the Niagara Lodge contract, with the behind-closed-doors cooperation of USA Niagara, that the public is, as yet, unaware of?

Other than make large campaign contributions to Governor Andrew Cuomo, that is.