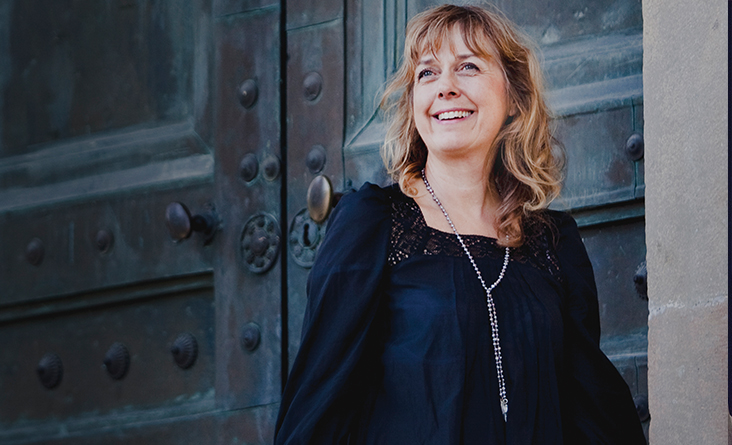 There are more than a few exceptionally gifted pianists, who either call Western New York home or, are frequent enough visitors to our area that they can be regarded as residents, for most intents and purposes. On Sunday April 23 at 3:30pm, one of those pianists, Susan Yondt, will offer the final concert in the 40th anniversary season of the Friends of Vienna at the Unity Church, 1243 Delaware Avenue in Buffalo, where she will explore both the marriage, and the legendary musical partnership of Clara and Robert Schumann. Yondt, a Buffalo native and a UB graduate who later married a Swedish husband and moved to Sweden 35, or so years ago, has developed a remarkable career in her adopted country, both as a concert performer, and as an educator. Susan teaches piano studies at the Royal College of Music in Stockholm, and maintains a busy concert schedule, both in Sweden and throughout northern Europe. One thing that stands out about Susan’s numerous recitals is her ability to bring her inimitable charm to each and every performance. Through both her words, explaining her musical selections, and her playing, she is able to engage the members of her audience in the creation of a truly memorable experience.

Susan’s program this Sunday afternoon, musically explores the relationship of Clara and Robert Schumann, perhaps the most celebrated couple of the Romantic Era in classical music. Clara was the child prodigy daughter of Friedrich Wieck and Marianne Tromlitz a famous singer in Leipzig, whom Friedrich divorced after learning of her affair with his friend. Clara remained with her father, who very tightly controlled her educational upbringing, musical and otherwise. When Clara was only eight years old, she met Robert Schumann, another gifted young pianist who had been invited to a musical evening at her home, but who was nine years older than her.

By the end of 1830, Robert had moved into the Wieck household as a piano student of Friedrich’s when Clara was only 11 and he was 20. In 1837 when Clara was 18, Robert proposed to her and she accepted. Her father strongly opposed to the marriage, and refused to give his permission. Robert and Clara went to court and sued Friedrich, and the judge allowed the couple to wed in 1840, despite Friedrich’s objections.

Their marriage was initially very successful, with Robert pursuing a career as one of the most important music critics in German speaking lands, while also developing a reputation as an increasingly admired composer. At the same time, Clara pursued her own career as both a virtuoso piano soloist and as a composer, along with giving birth, amazingly, to the couple’s eight children. Eventually, however, when Robert succumbed to the mental illness that resulted in his failed suicide attempt in 1854, followed by his commitment to an asylum for the last two years of his life, Clara largely abandoned composing and concentrated on performing concerts to support her large family. While Robert Schumann has come down to us as one of the most iconic composers of the Romantic era, as a composer Clara Schumann is perhaps best remembered as a case of ‘what if?’

The Schumann’s kept an extensive diary which has been published in several editions, and Yondt made effective use of it in developing her current recital program. “About ten years ago”, says Susan, “when I did a program called ‘Friends: Chopin and Schumann’ I started reading their diary to learn more about the Schumann’s family life. It always feels a little strange reading someone else’s diary, kind of like eavesdropping – but, it is also very interesting wof course. Last summer, I toured Sweden with both Clara and Robert’s music, and the audiences really liked it. Clara’s music is less-known than Robert’s and most of it was written when she was quite young, before the children were born, and I think it’s beautiful. Robert’s ‘Kinderszenen’ was probably the most popular piece on my program;  the audiences enjoyed hearing all thirteen pieces”.

When asked about the kind of recognition that Clara’s music currently enjoys in Sweden, Susan says “I think it’s better now than, say, twenty years ago. Clara Schumann is probably the best-known of all women composers. I toured with a program called ‘Ladies First’ a few years back which included Clara’s music, as well as that of Fanny Mendelssohn Hensel, Cecile Chaminade, and Amy Beach, and it was very well received. Clara’s Piano Concerto, as well as other works, are played occasionally in Sweden and in Europe. There seems to be focus on women composers right now. But still, we artists should try even more to include her works in our program, as the men’s works generally dominate the musical scene. I haven’t performed her Piano Concerto yet, but it’s on my list on pieces to play soon. I have played her Trio in G-minor, a wonderful piece, many times, and, of course, many of her other solo pieces for piano”.

Tickets: $12; $5 students. Information: www.friendsofvienna.org. All spaces in the lot at the rear of the Unity Church are available for free parking on Sundays.