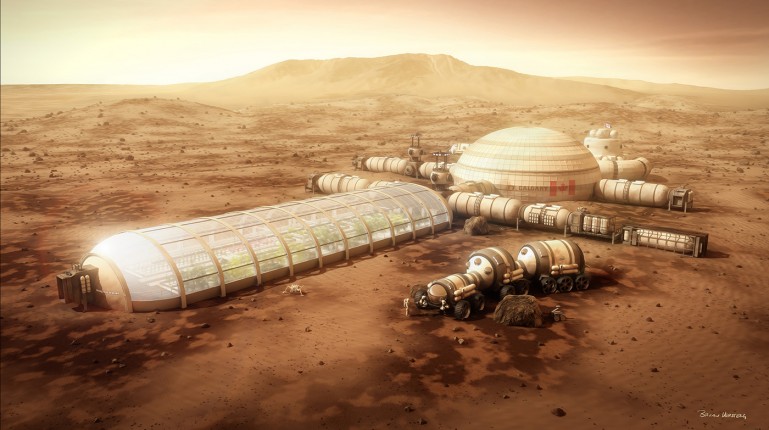 By Hannah Devlin, The Guardian

As far as home planets go, Earth ticks most of the boxes: oxygen, water, food and lovely views. But there are risks to be considered, too. What if a nuclear war, an asteroid collision or other disaster sent it all up in smoke, ending our own fragile existence?

Elon Musk is one step ahead. Last year he outlined his ambition to send humans to Mars as a “backup drive” for civilization. Now, the billionaire businessman has provided further details of his vision to make humans a multi-planetary species in a breezy paper, published in the journal New Space.

Musk is the founder and CEO at Space Exploration Technologies, known as SpaceX. He oversees the manufacturing of rockets and spacecraft, says the SpaceX website.

His paper outlines early designs of the gigantic spacecraft, designed to carry 100 passengers, that he hopes to construct.

Do You Want To Be One In A Million?

“The thrust level is enormous,” the paper states. “We are talking about a lift-off thrust of 13,000 tons, so it will be quite tectonic when it takes off.”

Creating a self-sustained civilization of around 1 million people – the ultimate goal – would take 40 to 100 years, according to the plans. Before full colonization takes place, though, Musk needs to get the first pioneers to pave the way.

The current situation is summed up in a Venn diagram showing two non-intersecting circles representing, on one side, the kind of people who would actually get on the Mars rocket and, on the other, those who could afford this kind of adventure. One estimate of the current cost is put at $10 billion per person.

“What we need to do is to move those circles together,” Musk explains. If the mission cost could be dropped to the cost of an average U.S. house price, Musk predicts people would start to sign up in big enough numbers. He thinks they’d be attracted by the opportunity to be among the first to live on the red planet. “Given that Mars would have a labor shortage for a long time, jobs would not be in short supply,” he points out.

The Moon And Venus Don’t Make The Cut

The paper strikes a buoyant, even humorous tone and doesn’t get excessively bogged down in technical detail. One section, titled “Why Mars,” spells out that the Red Planet is essentially the best of a bad lot. “Venus is a high-pressure – super-high-pressure – hot acid bath … not at all like the goddess,” Musk writes. “So, it would be really difficult to make things work on Venus.”

The moon is dismissed because it would too small for the overarching vision. “I actually have nothing against going to the moon, but I think it is challenging to become multi-planetary on the moon because it is much smaller than a planet.”

“It would be quite fun to be on Mars because you would have gravity that is about 37 percent of that of Earth, so you would be able to lift heavy things and bound around,” he adds. He predicts that journey times could eventually be cut to 30 days.

“In some ways, it is not that complicated,” Musk said of the spaceship’s design. Critics might point out that runs contrary to the reputation of this field of science.

Right Now The Trip Is A Little Pricey

Financially, there are some challenges ahead, the paper acknowledges. “We have to figure out how to improve the cost of trips to Mars by 5 million percent.”

However, Musk has some ideas for how such tremendous savings might be achieved. Reusing rockets could reduce the cost of spaceflight one thousandfold and refilling fuel in orbit rather than landing could make considerable savings too.

Space scientists remain skeptical about the vision, however.

In a recent interview, Ellen Stofan, former NASA chief scientist, dismissed the idea that there would ever be a mass transfer of humans to another planet, adding that trumpeting the idea risked being a distraction from the problems faced on our home planet. “I don’t see a mass transfer of humanity to Mars, ever,” she said. “Job one is to keep this planet habitable. There isn’t a planet B.”

Commenting on Twitter, Mark McCaughrean, senior adviser for science and exploration at the European Space Agency, struck a combative tone. “It’s a wild-eyed investment pitch, pumped up by the enthusiasm of credulous fanboys brought up on comic book sci-fi,” he tweeted in response to the paper. It’s wrapped in a zeal for “saving humanity from itself and the problems we’ve wrought on this planet,” he said in the same tweet.

“I’m less concerned about making humans a multi-planetary species than I am about making the Earth a sustainable multi-species planet,” he added.

Professor Andrew Coates, who works on the ExoMars rover at University College London’s Mullard Space Science Laboratory, said that the question of whether present or past life existed on Mars needed to be answered before a manned mission, which could contaminate the surface, could take place. He said keeping Mars untouched for now is a moral obligation. “Until we’ve conclusively answered that question we should keep our feet on the ground,” he said. Putting humans on Mars would be a type of vandalism, he added.

And what is the timeline for the project? Musk states that he is being “intentionally fuzzy” about when the vision might become a reality. He has noted that the first flights could start as early as 2023, though. “If things go super-well, it might be in the 10-year time frame, but I do not want to say that is when it will occur,” the paper said.