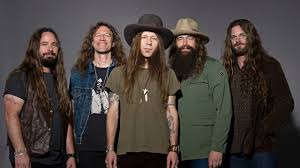 Blackberry Smoke isn’t just helping to save country music, they’re helping to save Southern rock music, rock music, American music, and music made by real humans sweating on a stage, holding real damn instruments, and testifying. The Atlanta, GA band is touring in support of their new album Like An Arrow (which featured an appearance by Greg Allman who passed away last month).

“This album is the self-produced culmination of 15 years of trying to plant our flag in the musical landscape. We couldn’t be more proud of it,” says frontman and songwriter Charlie Starr.