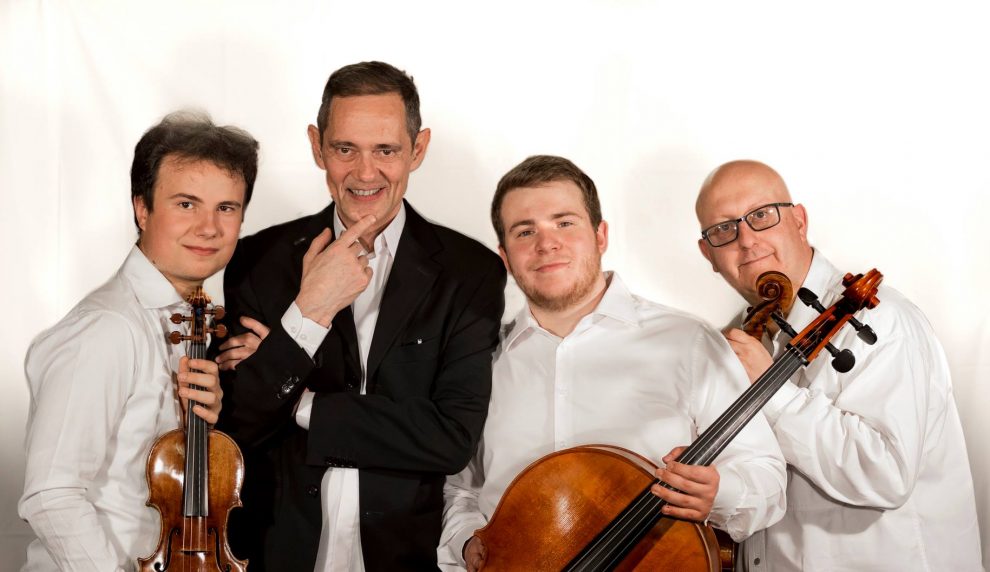 On Thursday August 3 at 7pm the Accademia Concertante d’Archi di Milano, a chamber music group based in Milan, Italy will make its Western NY debut at Blessed Sacrament Church, 1035 Delaware Avenue, in Buffalo. They will present a repeat performance of their program the next evening, Friday August 4 at 7pm at the Niagara Arts and Cultural Center, 1201 Pine Avenue in Niagara Falls NY. Their program is called “Uno Stradivari per la Gente 2017”, and will feature the group’s violinist Lorenzo Meraviglia performing on a rare violin, the 1730 “Omobono” Stradivarius from the collection in Cremona, Italy. Two other members of the Accademia will also be making their area debuts, violist Stefano Rocca and cellist Riccardo Morelli. Pianist Andrea Carcano is familiar to local classical music lovers, having previously appeared in several Camerata di Sant’Antonio Chamber Orchestra programs accompanying the Italian virtuoso violinist Matteo Fedeli, who himself performed on several different rare Stradivarius violins.

The program features a performance of the lushly romantic Piano Quartet No.1, in c minor, Opus 15, by Gabriel Fauré, who composed it in 1877 during the latter stages of his romance with Marianne Viardot, daughter of the well-known singer Pauline Viardot, who was herself the inamorata of the Russian novelist Ivan Turgenev. After wooing her for five years, Fauré had finally become engaged to Marianne, but the engagement lasted for only a few months, before Marianne broke it off, to the young composer’s considerable distress. One critic, Stephen Johnson wrote that the Adagio movement of the work gives the listener “more than a hint” of Fauré’s sadness at the time, though “the emotion is always nobly restrained, with not even the slightest hint of self-indulgence”.

The program of all late-nineteenth century music includes the ever-popular virtuosic Passacaglia in G minor on a Theme by Handel, for violin and viola, a work from 1897 by the Norwegian composer Johan Halvorsen, and the Allegro moderato movement from the Piano Trio No.1 in d minor, Opus 32, an 1894 work by Russian composer Anton Arensky, the star pupil of another Russian composer, Nikolai Rimsky-Korsakov, along what is being billed as “a Stradivarius Surprise”.

A $10 donation is suggested for the Thursday concert at Blessed Sacrament, which features a post-concert reception courtesy of Amberleigh of Williamsville. Admission to the Niagara Arts and Cultural Center for the Friday concert is $20. For more information call the office of the Italian Vice Consul, sponsor of both events, at 856-3626