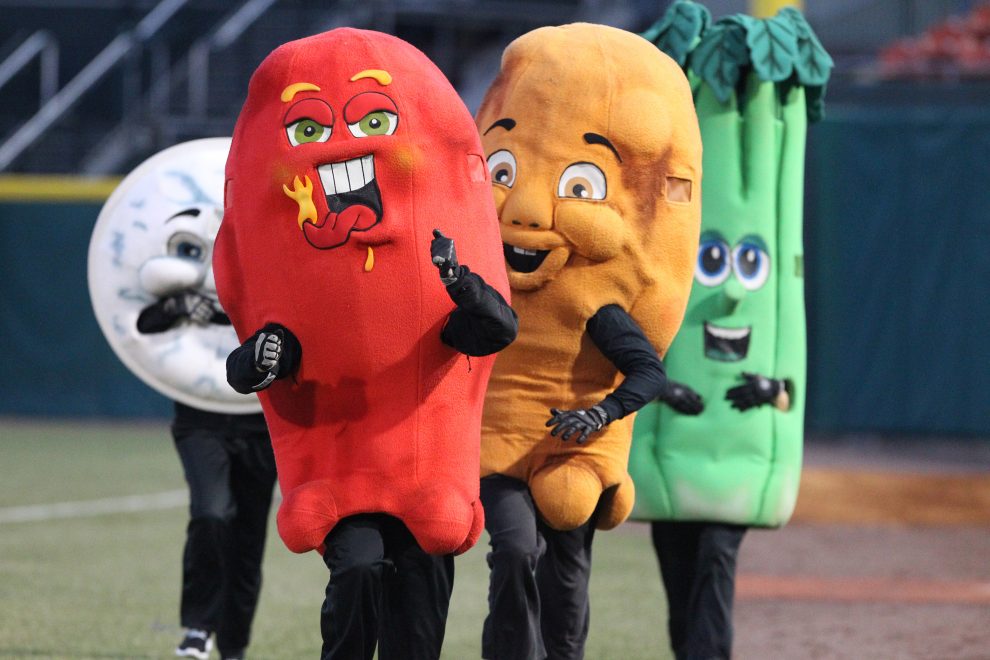 Beloved Bisons mascot running for the final time next week.

As far as drama goes, this will be the exciting finale to what has been a disappointing season for the Buffalo Bisons on the field.

The team is commemorating 30 seasons downtown. Hard to believe that what opened to great fanfare as Pilot Field back in 1988, complete with visions of major league expansion, has now matured into the second oldest ballpark in the International League. And one that has held up well in the era of huge stadium construction around the country these past two decades plus.

The Bisons are pulling out all the stops in celebrating its downtown home, and one of the most anticipated events of the summer will be the season conclusion of the famed “WCC Race”. WCC stands for “Wing, Cheese. Celery”.

For those unfamiliar with the race, four costumed mascots, named Chicken Wing, Atomic Wing, Bleu Cheese and Celery, race halfway around the warning track between innings during the middle of each baseball game. All for show, for bragging rights, and another pleasant entertainment diversion that is a ubiquitous part of the minor league baseball experience.

The fun all started in 2011, which means that the famed race is now concluding its 7th year. “We expected this to be a multi year promotional event, but even we did not anticipate it being as popular and big as it has become”, said Brad Bisbing, team Director of Markeitng and Public Relations.

The central story line here, and one that will take center stage as the team begins its final homestand this coming Monday, is that the tall and lanky Celery has never won a race. Going into this week, she is an all time 0-449 during this run of futility, and unless something crazy happens this coming Monday or Tuesday, will enter her 450th and final WCC Race looking for that elusive first win.

The development of the script and execution of the race falls under the day to day direction of Mike Simoncelli, Bisons Director of Entertainment of Promotions, and he admits that Celery has become the most popular character among the fans. “Our mascots Buster and Chip spend a lot of time mingling with the fans and visiting the suites, but the character people ask for the most is Celery, and that incudes demand for time at appearances outside the ballpark,” said Simoncelli. Very often the various promotional themes of any given evening spill into the race, and Simoncelli and his team have to choreograph the events of the evening with the race. So that means that on Star Wars night, patrons might see Darth Vader wreaking havoc with the race’s outcome. “We roll with different ideas,” said Simoncelli.

The front office team doing the creative script development includes General Manager Mike Buczkowski, Assistant General Manager Anthony Sprague, Simoncelli and Bisbing. “But we include input from many of our front office staffers,” said Bisbing. Simoncelli added, “Often we get ideas from fans who’ve seen similar mascot races at other ballparks and like to weigh in. We take those suggestions very seriously.”

Over the last seven seasons, there have been memorable moments in the WCC Race. Celery has found many ways to lose and snatch defeat from the jaws of victory, often in exasperating ways. On the last day of the 2011 season, there was talk in the Bisons clubhouse that the players were going to get in on the action and interfere with the mascots running by their bullpen and dugout, allowing Celery a clear path to the finish line and her first win.

So weren’t fans surprised that night to see the mascots beginning at their usual positions in the outfield, but racing counterclockwise that night and staying away from the Bisons players and any mischief. Bisbing did not relent when asked of there was any deliberate move by the front office to thwart the alleged conspiracy. “Players like to get in on the fun. You’ll see the guys in the bullpen walking in the path as the race goes by, or they toss rosin bags, but nothing has ever happened on the field by either of the teams to alter an outcome.”

Celery’s most memorable near win happened on August 3, 2013, on her special bobblehead night. “It was a nearly full house that night,” said Bisbing, and of course everyone in the stands expected Celery to get that first win. And there she was, nothing in front of her but the checkered flag. And then what happened next was what we call ‘The Shove’”.

The competing mascots had all been distracted by a special appearance from occasional visiting mascot “Carrot”. And at the final second, Chicken Wing broke away from that distraction, raced behind Celery and shoved her down to the grass, then sprinted to the finish line and offered mocking derision, while a chorus of boos rained down from the stands.

There have been other side stories. Last season Atomic Wing won the first 18 races of the season, before it was revealed that he had ingested an “illegal condiment”, and was handed down a suspension.

If this all sounds silly, well… it is. “There’s already a big fan buildup for Celery’s final race among the fans. It should be a special night,” said Simoncelli, while offering few details on what might happened or how that final race will be staged. “We’ve also had more than our share of media interest,” Bisbing added. It all happens next Wednesday, August 30, with a 7:05PM first pitch against the Pawtucket Red Sox.

The bit of good news is that even though Celery might be retiring from the WCC Race, she will still be an important part of the game day experience come 2018 and beyond. “Fans will definitely be seeing Celery around the ballpark and around town,” said Simoncelli. The other bit of news is that the WCC Race will continue to be staged next season, and no matter what the outcome of next Wednesday’s exciting finale, the guess from this corner is that Celery might live to race another day sometime down the road.

-If you enjoyed this week’s eclipse and all the hype, the next one to hit North America happens on Monday, April 8, 2024, and that one will be passing directly over Buffalo, New York that afternoon. What better a day than to have a home Bisons matinee game and an eclipse promotion. Are you listening, Bisons front office? Circle that date now!

FOOD, GLORIOUS FOOD!
THE BISONS CLIMB OUT OF THE ABYSS by Andrew Kulyk and Peter Farrell