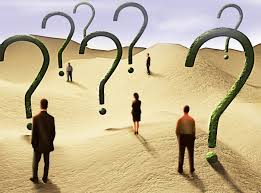 “It became necessary to destroy the town to save it,”. Unidentified U.S. major after an Allied bombing raid in the city of Ben Tre in Southern Vietnam, 1968.

Uncertainty is the most oft-used word at the U.S. Federal Reserve Board. Economic uncertainty, political uncertainty, wage growth uncertainty, productivity uncertainty… etc.  By definition, uncertainty is the state of being uncertain. As preposterous as it sounds, there is an uncertainty index to measure the amount of uncertainty across the macro-economic  landscape.  One has to wonder if the data collectors at the Uncertainty Index Board are certain of their findings. The persistent use of the word uncertainty implies that the U.S. economy has concealed its true intention from Janet Yellen, chair of the Federal Reserve, suggesting that Fed policy makers fear what they don’t know more than what they do know. When under heightened terror alerts we are told by the Department of Homeland Security to be aware and alert, but go on living our everyday lives. Central Bank policy makers can’t seem to go on living their lives ten years after the great recession that they played the greatest part in creating. The Fed discount rate is still at historically low levels and short-term government bond yields continue to push the negative real interest rate bound.  Similarly, across the globe, Junk bond yields in Europe are at alarmingly low levels and non-performing loans in the Eurozone are at disturbingly high levels, while the Japanese ten year bond is yielding zero. Meaning, Japanese bond investors receive a negative real return on their investment after ten years of lending their money to the Japanese government, when adjusted for minimal levels of inflation.

The Federal Reserve seems to have wrapped the economy in plastic like the Norwegians did to their dead for sanitary reasons following World War II. Plastic isn’t biodegradable. So it seems the Federal Reserve doesn’t want the economic business cycle to exist. Ultimately, it will be proven an unnecessary principle to kill the business cycle so that current market participants can go on living in a plastic cocoon of price appreciation for eternity.

If it’s broke, break it. This seems to be the real Federal Reserve Bank principle at work.

American Made: CIA Drug and Sex Trafficking In The National Interest
Hitting The Wall