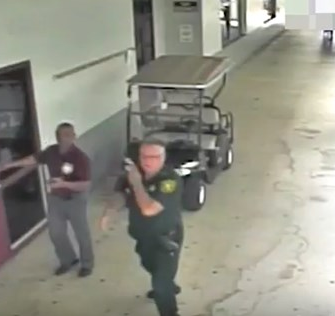 The evidence is in: Scot Peterson is a coward.

Armed school resource officer Deputy Scot Peterson was on the scene of the February 14 shooting at Marjory Stoneman Douglas High School in Parkland, Florida.  He did not elect to confront shooter Nikolas Cruz.

Instead Peterson hid behind a concrete column outside the building, where the killing was taking place, until the gunfire ended.

Peterson never fired his weapon.  Thanks to Peterson, Cruz was free to kill 17 people.

Peterson emerged from the massacre uninjured.

Peterson claimed he was following protocol by cowering outside, listening to gunfire killing children he might have saved.

According to the training material:

[W]hen a suspect is confronted by any armed individual (police, security, concealed carry person) they either shoot it out with that person or kill themselves. Either way, the shooting of innocent bystanders must stop. Now, the first officer … on scene will immediately go to confront the shooter…”

President Trump said of Peterson, “When it came time to get in there and do something, he didn’t have the courage.”

Broward County Sheriff Scott Israel said of his craven deputy, that he was “devastated, sick to my stomach” after learning of Peterson’s cowardice.

Peterson defended his actions, arguing that he believed the gunfire was coming from outside, rather than inside, a school building. Because of that, he said, he “took up a tactical position” to try to assess the situation.

Video footage, along with audio dispatch records, show Peterson standing outside. In part of the footage, Peterson is obscured by a pole, but portions of the recording show him standing still – frozen stiff with fear.

“The video speaks for itself,” the sheriff’s office said in a statement. “His actions were enough to warrant an internal affairs investigation, as requested by Sheriff Scott Israel on Feb. 21. After being suspended without pay, Peterson chose to resign and immediately retired rather than face possible termination.”

The audio also shows Peterson knew the shooting was going on inside. Audio recordings show Peterson arrived two minutes after the gunfire began — and then focused on the building where children were being massacred as he hid at a safe distance.

He should have gone in.

The Broward County deputy training lesson plan states: “If you are on scene …  and hear gunshots, you should immediately … prepare to respond. Remember, every time you hear a gunshot in an active shooter incident; you have to believe that is another victim being killed.”

The lesson plan lists “priorities of life” as:

Peterson reversed the order and placed himself first.  Had he followed protocol he might have saved a dozen lives.

The manual goes on to say, “Time is critical in each of these incidents. This is like no other crime. The motive is to kill as many people as possible in the shortest amount of time. Why? Because the bad guy knows ‘we’ are coming.”

Peterson had no plans on coming.

The entire incident lasted several minutes. It took eleven minutes for police to actually enter the building. Peterson was on the scene for 9 minutes before police got inside the building.

Joseph A. DiRuzzo III, Peterson’s attorney, said, “Let there be no mistake, Mr. Peterson wishes that he could have prevented the untimely passing of the seventeen victims on that day, and his heart goes out to the families of the victims in their time of need. However, the allegations that Mr. Peterson was a coward and that his performance, under the circumstances, failed to meet the standards of police officers are patently untrue.”

Peterson has maintained that not all the facts are being reported, and that he’s not a coward.

After the training manual, video and audios were released, there is perhaps no one in the world who believes him.