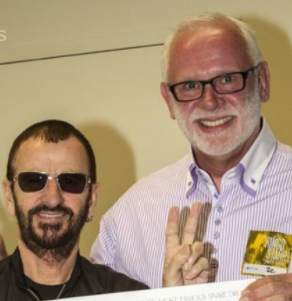 Dial in a little closer and you’ll discover The BBC Band. Made up of five members, the group performs The Beatles, and other British Invasion classics from the sixties.

Not limited to Buffalo, people across the country know of The BBC Band through their popular YouTube, Facebook, and Instagram accounts and through word of mouth.  As Beatles tribute bands go, they are widely regarded as at the top of their field.

They not only perform the songs of the Beatles, but some of The BBC members had personal interactions with Beatles’ members. 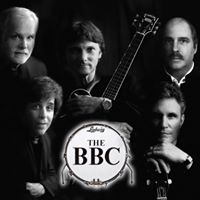 Connelly and his family spent time with Sir Paul McCartney in Toronto.  Thomas is a long-time pal of Pete Best, the Beatles first drummer.

Astridge has earned an inner circle spot as historian and curator of Ringo Starr’s Beatles-era drum kits and gear.

It came about from his passion for The Beatles, for Ringo, his playing, and his drums.

“At one point in my life I decided that I wanted my own vintage Ludwig oyster black pearl drum kit, just like Ringo’s.” said Astridge. “Over the years, I had compiled a great deal of research and amassed a collection of drum kits and gear, all specific to what Ringo used during his time with The Beatles. I created a website called RingosBeatleKits.com to share my information. That had to be the best decision I ever made in my life because, in 2012, I was asked to assist in a project relating to Ringo’s actual Beatles kits.”

It was a team effort, with Starr as part of the team, but it was Astridge who arranged, documented and breathed life back into five of the six Beatles era drum kits that Ringo still owned at the time.

Starr said, “Because of [Astridge’s] research, I’ve learned things that I didn’t know and [he] brought back fond memories of things that I had forgotten.”

In addition to working with the Grammy Museum and the Rock and Roll Hall of Fame Museum, Astridge spent 2015 working on an auction for Ringo and wife, Barbara Bach’s Lotus foundation through Julien’s Auction House of Beverly Hills.

He was tasked with documenting and doing historical research on a number of drum kits that Ringo put up for sale including his first Ludwig oyster black pearl drum set, which was used on some of the Beatles biggest early hits including I Want To Hold Your Hand and She Loves You. That particular drum kit was auctioned off for $2.1 million.

Being appreciative of his work and years of research, Ringo authorized his likeness on a Beatles drum kit timeline poster that Astridge commissioned to educate people about Ringo’s gear. 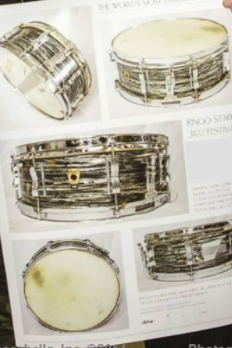 Over the years, Astridge has been traveling the world lecturing and educating people on Ringo’s drumming, his drums, and “the importance of following your dreams.”

Astridge’s latest Starr-approved project is one that has the international drum world and collectors buzzing. In partnership with the Ludwig Drum Company, they are building 15 snare drums to the exact specifications of Starr’s 1963 Ludwig Jazz Festival snare.

“There is a very unique history behind Ringo’s snare drum and, for a number reasons, his is extremely rare with only six presently known to exist.” said Astridge. From May 1963, Ringo used that drum on a majority of Beatles songs including some of the bands biggest hits.

Astridge used his research, the information obtained from documenting the original and specifications from two 1963 Ludwig Jazz Festival’s that he has in his own private collection. Proceeds from the sale of these limited-edition snare drums will benefit Ringo and Barbara Bach’s Lotus Foundation charity.

Astridge remarked “What’s most important to me is that it allows us to put a smile on Ringo and Barbara’s faces by supporting their charity, which in turn helps other people both today and for generations to come.”

As for the BBC band, they are gearing up for “International BeatleWeek” in Liverpool, England, which will feature over 60 bands from 20 countries.

Astridge was invited as guest speaker and, during his initial meeting with Music & Events Planner, Jon Keats, Gary pitched The BBC Band.

Keats did his own research and contacted Astridge to invite the group as well.

While in Liverpool the band will perform at a number of venues including the Cavern Club where the Beatles became famous having appeared there some 292 times.

“We are pleased to represent Buffalo at BeatleWeek,” said Astridge.  “The event celebrates the most famous pop group in the world, The Beatles.”

Indeed, Astridge is in effect an ambassador from Buffalo, to the international world of pop music, culture, and history.

Thanks to his knowledge and skills, Astridge’s talents gained him the friendship, support and trust of the legendary Ringo Starr, as he helps contribute to his causes with the Lotus Foundation.