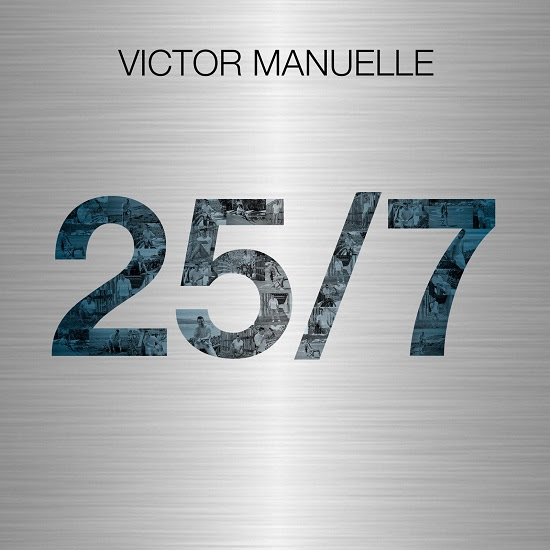 This album contains the hit singles “Amarte Duro,” “Hasta Que Me Dé La Gana,
” “Mala Y Peligrosa” and “Imaginar”
MIAMI  – Celebrating his 25-year career, the renowned Puerto Rican sonero Víctor Manuelle released his 18th album 25/7  one of the most varied records of his career, in physical and digital format via Sony Music Latin.
Expressing his pride and gratitude, Víctor Manuelle explains the meaning of the album’s title: “When I embarked on this dream, I never imagined I would get so much back – the love of a faithful audience that’s willing to do whatever it takes to show me its support; the ability to travel the world carrying the banner of salsa, and the pride of representing my country, Puerto Rico; meeting and sharing with so many fellow artists of different generations whom I admire and respect.  Summarizing, during the last 25 years, at all hours of the day and night, a song of mine has been playing somewhere in the world. Therefore, I’ve been with you 25/7.”
Accompanying Víctor Manuelle in this celebration are other outstanding Puerto Rican artists from different generations, including Gilberto Santa Rosa, Glenn Monroig, Yandel, Farruko and Bad Bunny.
All of the songs on 25/7 sound unique, but all remain true to the tropical roots that Víctor Manuelle has cultivated throughout his career.
“Amarte Duro” (Love You Hard) feat. Farruko – With musical arrangements by Jay Lugo, this is the fourth single from the album. Farruko adapts his flow to salsa with skill and mastery.
“Nada Nos Separará” (Nothing Will Separate Us) – This romantic salsa incorporates urban touches to create a fresh and modern fusion.
“Hasta Que Me Dé La Gana” (Until I Feel Like It) – The second single from 25/7, about a love triangle, became the most-played salsa hit of 2017 in the Dominican Republic. In addition, it hit #1 on the Colombia tropicalchart, and went Top 10 in the United States, Puerto Rico, Panama and El Salvador. During the last week of 2017, it stood at #1 in Peru just as “Mala y Peligrosa” jumped to #2, making him the only salsa artist of 2017 to hold down the top two spots simultaneously.
“Salsa Pa’ Olvidar Las Penas” (Salsa For Forgetting Sorrows) feat. Gilberto Santa Rosa – Performing with “El Caballero de la Salsa“, Víctor Manuelle affirms his commitment to this genre.
“A Veces” (At Times) – A modern salsa which finds Víctor Manuelle urging us to take life as it comes.
“Me Enteré De Tu Boda” (I Found Out About Your Wedding) feat. Glenn Monroig – The vocal styles of these two great singers blend together beautifully on this acoustic-framed ballad.
“Quiero Tiempo” (I Want Time) feat. Juan Luis Guerra – A happy song that speaks of the importance of spending time with our loved ones.
“Mala y Peligrosa” (Bad and Dangerous Woman) feat. Bad Bunny – The third single from the album seduces us with its lyrics and musical arrangements. Within one month of its premiere, its music video surpassed 23 million views on his VEVO channel and went on to become the most-viewed salsa video of 2017. In addition, it was certified Gold by the RIAA in the United States and Puerto Rico.
“Imaginar” A duo with the leader and legend Yandel, he broke records getting the # 1 spot in the tropical charts with his fusions of salsa with urban rhythms. In addition, it was named the most popular tropical song of 2016, marking the third time that Víctor has obtained song of the year in the popularity lists.
“Cuando Me Escuchen” (When They Listen to Me) – This song features outstanding instrumental performances while its lyrics inspire us to trust our instincts.
Salsa’s continued vitality is due in large part to the talent and work ethic of Víctor Manuelle, who holds the record for most #1 hits on Billboard‘s Tropical Songs chart with a total of 28.
Enjoy 25/7, an album you will be playing around the clock!
Sigue VÍCTOR MANUELLE en / Follow VÍCTOR MANUELLE on:
www.facebook.com/victormanuelleonline
www.twitter.com/victormanuelle
www.instagram.com/victormanuelleonline
www.youtube.com/victormanuelleVEVO
Para más información / For more information:
David LaPointe | Marketing & Promotions
LP Marketing & Promotions
david@lppromotions.com
Sony Music US Latin – Contacto / Contact:
Claudia Guevara | Sr. Marketing Manager
Sony Music Entertainment – US Latin
claudia.guevara@sonymusic.com
Kary-An Díaz | Director of Communications, Publicity
Sony Music Entertainment – US Latin
karyan.diaz@sonymusic.com