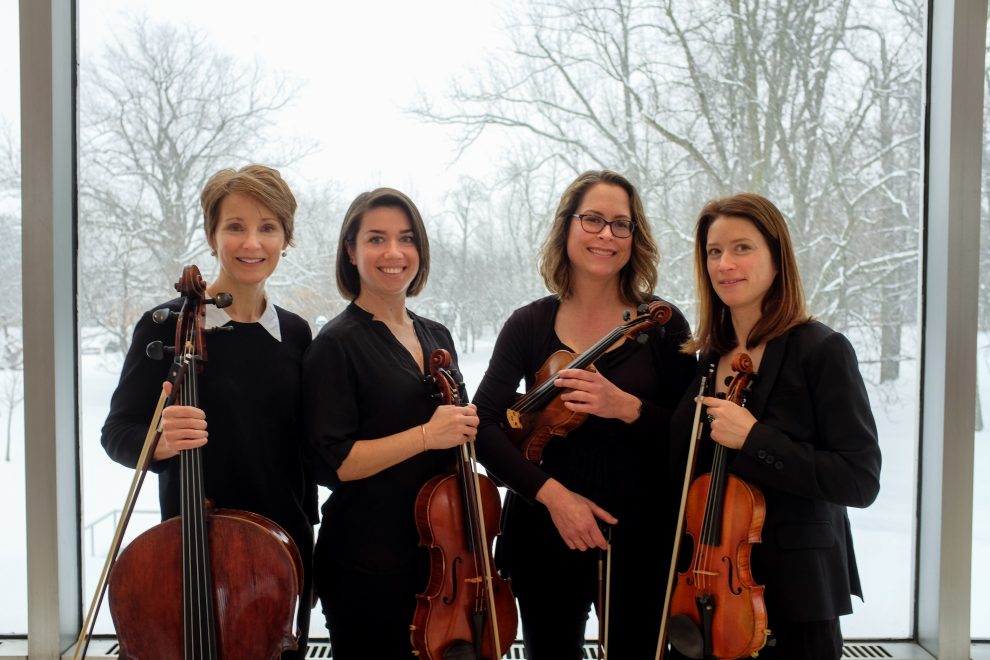 The Friends of Vienna welcome the Artemis Quartet

The Artemis Quartet will make its debut on the Friends of Vienna series on Sunday, April 8 at 3:30pm at the Unity Church, 1243 Delaware Avenue in Buffalo. The members of the group are all also members of the Buffalo Philharmonic Orchestra: violinists Loren Silvertrust and Amy Glidden, who is associate concertmaster, principal violist Caroline Gilbert, and cellist Eva Herer.

“We named the quartet for Artemis, the ancient Greek goddess of hunting and the wilderness as well as childbirth and the protection of girls”, says Glidden. “Our program was inspired by a friend and patron for whom we had performed a house concert. She mentioned how interesting it would be to present a program outlining the development of string quartet repertoire. Since we are performing the works in order of their composition dates, Chronology, from the ancient Greek ‘chronos’, was a perfect fit. However, we did consider naming the program ‘Time’s Up’ in a nod to current events!”

The eclectic program will include well-known works by Haydn and Ravel, but also less familiar quartets by Beach and Glass. “We picked works that we loved playing”, says Glidden, “and which would give some general sense of the breadth and variety of string quartet repertoire. In addition, we are playing the works of two American composers, Philip Glass, a contemporary composer, and the lesser known Amy Beach so that we could introduce the audience to new works”.

The amazingly prolific Austrian composer Franz Josef Haydn is generally acknowledged as the “Father of the string quartet”, having composed sixty-eight quartets, almost all of which are still performed on a regular basis by string quartets all over the world. Haydn’s String Quartet in B Flat Major, Op. 76, No. 4 is from his last complete set of six quartets. The “Sunrise Quartet”, as it is popularly known, is considered one of his finest quartets due to the its rarely equaled depth of feeling, and sense of spiritual transcendence. The work begins with the first violin gloriously ascending above a soft sustained chord, much as the sun rises every morning to shower the earth with its radiance, no doubt earning the work its name.

Maurice Ravel composed his sole String Quartet in 1903 when he was still a student at the Paris Conservatoire. Very much influenced by the sole string quartet of the older Impressionist master Claude Debussy, it is far from being what is generally thought of as a student work, losing nothing of its luster in a comparison with it. The quartet’s concluding movement is marked “Vif et agité” by Ravel, i.e. “Lively and Agitated” and its contrast of lyrical and more expressive melodies has an unsettling quality which is only heightened by the repeats of the movement’s initial outbursts that bring the work to a close.

The “Gaelic” Symphony of Amy Beach (1867-1944), premiered by the Boston Symphony in 1896 was the first symphony composed and published by an American woman. Beach was already enjoying a very successful career as a concert pianist when, at the age of eighteen she married a prominent Boston surgeon twenty-four year her senior, who strictly limited her concerts performances to only two a year, for which she had to be listed on concert programs, and on any of her published compositions as Mrs. H. H. A. Beach. He also forbade her to have a composition tutor, so she was largely self- taught. Luckily for the world of classical music, Beach persisted and created a body of music that has been only recently been given the performance attention that it demands. Completed in 1929, her lean, one-movement, lyrically written Quartet incorporates Alaskan Inuit melodies as thematic material and was one of her few works not published in her lifetime.

Minimalist composer wrote his String Quartet No. 2 (Company) in 1983, seventeen years after composing his first-string quartet. The music was originally conceived as a piece of instrumental music for a theatrical adaptation of Samuel Beckett’s novella of the same name. The monochromatic nature of the piece provides a perfect introduction to the concept of minimalism in music.

“I hope that we can communicate our love for this music”, says Glidden. “We have always envisioned this program as in a ‘salon’ atmosphere, where the works will be presented in an intimate atmosphere and we will speak to the audience about the pieces, rather than just sitting down and playing. The intimate space of the Sanctuary of the Unity Church is the perfect setting for this kind of program”.