ALBANY, NY (04/09/2018) (readMedia)– The Preservation League of New York State will announce its list of the Empire State’s most threatened historic resources, Seven to Save, at a news conference in Albany on Tuesday, April 10 at 11:00 a.m. in Room 130 of the Legislative Office Building, the LCA Press Room. Representatives from many of the designated sites will be in Albany for the announcement.

The Preservation League of NYS’s 2018-19 Seven to Save Endangered Properties List draws attention to the loss of historic fabric in National Register-listed Historic Districts; development pressures; and reuse challenges. These seven valued historic resources are in danger of disappearing because of vacancy, disinvestment, and lack of public awareness.

“Since 1999, Seven to Save has mobilized community leaders and decision-makers to take action when historic resources are threatened,” said Jay DiLorenzo, President of the Preservation League. “A Seven to Save designation from the League delivers invaluable technical assistance, fosters increased media coverage and public awareness, and opens the door to grant assistance for endangered properties.” 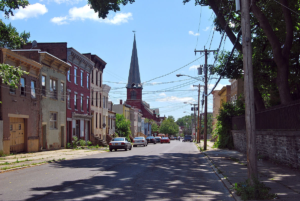 In the mid-nineteenth century, this neighborhood was densely populated with German and Irish immigrants who worked in Albany’s nearby port and socialized and worshiped within walking distance of their homes. By the mid-twentieth century, many of these families had left the neighborhood, leaving behind widespread abandonment and soaring vacancy rates. In 2015, New York State adopted the International Fire Code which identifies vacant structures with potentially hazardous conditions with a large red “X” placard. This neighborhood exemplifies the challenges that municipalities face in addressing issues of vacancy and deterioration in historic districts while protecting the safety of first responders. The League will work with stakeholders to discuss strategies for stimulating investment in the South End. 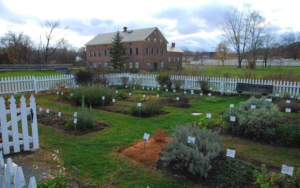 Just north of Albany is the location of the first Shaker settlement in the United States, founded by Ann Lee in the late 18th century. The Shakers were highly regarded for their architecture, inventions, and domestic arts. The district includes three clusters or “families” of buildings: the Church Family, the South Family, and the West Family in a mix of classic Shaker-style architecture. Bordered by the Albany International Airport and two major highways, the site is threatened by encroaching development which could lead to loss of context or outright demolition. The League will work with advocates and local municipalities to highlight the significance of this site.

Jamestown, the largest city in Chautauqua County, boasts a National Register-listed downtown commercial historic district and many historic neighborhoods. The Richardsonian Romanesque Jamestown Arcade once housed retail, theaters, clubs, and studios and retains many intact interior features, including molding, metalwork, tin ceilings, decorative woodwork, and fixtures. Over the years, a series of owners made plans to stabilize and save the Arcade Building, but none have succeeded. The Preservation League will work with city officials, preservationists, developers, local advocates and the arts community to create a plan for stabilization and rehabilitation which takes advantage of Federal and NYS Historic Tax Credits.

John Talcott Wells, Sr. developed an ingenious truss system that addressed the shortcomings of typical post-and-beam barn construction by strengthening interior framing while simultaneously creating open space in the upper sections of the structure. In 1889 he received a patent for his “Wells Truss System for Buildings or Bridges.” Only found in a small section of Western New York, Wells Barns are difficult to identify from the exterior, but they usually feature gambrel roofs and a double window with a decorative lintel underneath the gable, and are sometimes called “Country Cathedrals.” The League will work with the Wells Barn Legacy Project to preserve the heritage of this unique barn type in the face of a shifting agricultural landscape. 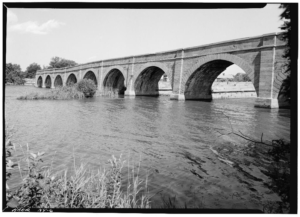 A National Historic Landmark and part of the New York State Barge Canal Historic District, the Schoharie Aqueduct carried the Erie Canal over the Schoharie Creek. Construction of the aqueduct began in 1839 and it was placed into service in 1845, with additional alterations in 1855 and 1873. As the canal was rerouted, the Schoharie Aqueduct was no longer needed and fell into disrepair. Despite a stabilization and restoration plan completed by New York State, large portions of the aqueduct have collapsed and the remainder has not been stabilized. The League will work with Friends of Schoharie Crossing State Historic Site to advocate for its preservation and maintenance as New York launches the adjacent Empire State Trail.

This railroad roundhouse once served the Lehigh Valley Railroad, which primarily hauled coal from Pennsylvania west through the Southern Tier and Finger Lakes to Buffalo, and east through New Jersey to New York City. At the Manchester Roundhouse, workers fixed trains, refueled, exchanged freight and switched cars. In its heyday, it was one of the largest freight transfer centers in New York State. Now vacant for more than 30 years, the site’s brownfield status presents additional challenges to plans for rehabilitation. The League will help the town of Manchester and Ontario County follow environmental protocols, historic preservation and sensitive rehabilitation measures as they boost awareness of transportation history in Western New York.

Opera houses are a ubiquitous building type across upstate New York, found in rural towns and villages, regional commercial centers and major cities. The Opera house was not only a venue for cultural activities, but also the heart of the community and a place to relax, socialize, and be entertained and enlightened. The buildings are characterized by lower floor public space with an upstairs auditorium and often anchor main streets. But times changed, and upstate opera houses went dark. While many were lost to demolition or insensitive alterations, the survivors require creative solutions to meet building code requirements and once again welcome the public. The Preservation League will work to promote best practices for reopening these charming performance spaces by publicizing successful efforts, and provide technical assistance for advocates who wish to follow suit.

Additional information about each of the designees is are available on the Leagues’ website at www.preservenys.org .

The Preservation League draws statewide attention to New York’s most important and at-risk historic places. Working in conjunction with local stakeholders, the League has been able to avert demolition, develop plans for reuse, secure landmark designation, and foster greater public awareness of the value of New York’s unique and irreplaceable historic resources.

Media outreach, tours, grants and new legislation are among the strategies the Preservation League uses to secure the future of historic places at risk. The League also collaborates with advocates, elected officials and other stakeholders to craft preservation strategies and put these plans to work.

The Preservation League of New York State is a not-for-profit membership organization founded in 1974. The League invests in people and projects that champion the essential role of preservation in community revitalization, sustainable economic growth, and the protection of our historic buildings and landscapes. It leads advocacy, economic development and education programs across New York State.