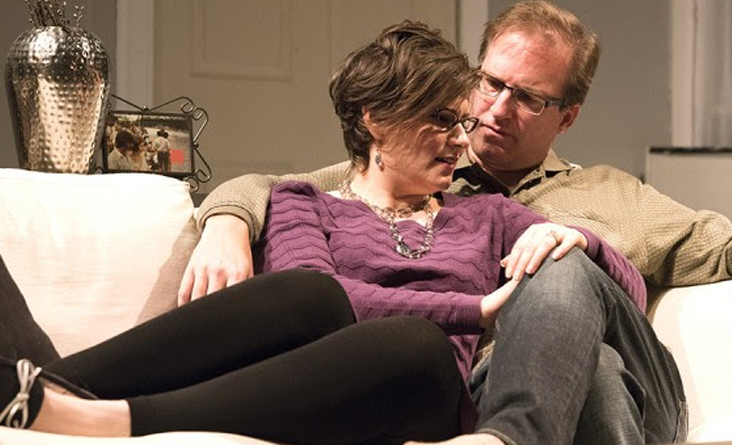 By Jon Weiderhorn of Loudwire

Released last month, the new Ministry album Amerikkkant was created entirely after Trump was elected president. The album is a hostile, aggressive, politically and socially scathing critique of the turmoil of the times. But unlike the anti-Bush trio, Amerikkkant is not strictly an indictment of Trump. Instead, it’s a brutal condemnation of the conditions that had to exist in America before the country would choose such an unpredictable outsider as Trump to be the figurehead of the nation.

Throughout Amerikkkant, Jourgensen delivers countless rants against capitalism, conservatism, elitism, racism, gun owners and the potentially lethal divide in this country that separates neighbors and breaks up friends. Yet, he also calls for the unwashed masses to unite and rise up against their oppressors on songs like “We’re Tired of It.” And he does so with a sense of humor and an innate knack for creativity, slowing down Trump’s voice as he speaks about building a wall in “I Know Words,” excising the president’s speech to the words “Unfit and unqualified” in “Game Over” and ending the song with the sound effect of video game character Pac-Man turning inside-out and bursting.

More poignantly, Jourgensen follows Fear Factory frontman Burton C. Bell’s cybernetic vocals on “Wargasm” with quotes that seem to be from a soldier whose IQ is lower than his gun caliber: “Yeah, I remember that feeling. That was fucking righteous! Violence right in front of my fucking face. I felt it from my gut down to my fucking balls.” Like Trump, the sentiments are so lunkheaded and outrageous, they’d be kinda funny – if they weren’t so scary.

With Amerikkant, Jourgensen has found a sleek vehicle to frame his polemic. Rather than couch his fury in a roiling sea of predictable electronic beats and cutting, thrash beats, as he has sometimes effectively done in the past, he has varied the formula. Sure, the screaming distorted vocals are familiar and there are heavy guitars aplenty, but they’re woven into in musical beds that writhe and squirm like pinned victims trying to evade certain execution. As with any good Ministry album, there are tons of spoken word samples, but there’s more: The album is enhanced by wailing sirens reminiscent of Public Enemy, classical and Middle Eastern sounding strings from Lord of the Cello (especially in “I Know Words” “Twilight Zone” and “Victims of a Clown”) and the all-pro turntablists, N.W.A.’s Arabian Prince and DJ Swamp (Beck), who add to the cacophony on numerous tracks.

In an age when albums have turned into disposable containers for singles, Jourgensen is still fighting for the integrity of the full-length record, and Amerikkkant, while not exactly a concept album, plays out like a complete piece of art. “I Know Words,” while worthwhile as an individual song, lays the foundation for the skirmishes that follow. The eight-minute long “Twilight Zone” is a trudging battle march of echoing beats, sludgy guitars and electric harmonica that addresses the surrealism of today’s political landscape “Victims of a Clown” is equally long, but more haunting, filling space with eerie organs, squalling guitars, a groove-laden bass line and Jourgensen’s cries for (r)evolution. Despite the seeming contrast of styles, the track is held together with quotes from the memorable final speech in Charlie Chaplin’s “The Great Dictator.” In retrospect, it’s similar in structure to “So What” from The Mind is a Terrible Thing to Taste, but the message is hopeful instead of nihilistic.

Ministry also revisit other voices from the past on “TV 5-Chan,” returning to the unnerving, static-and-noise filled soundscapes they began with Psalm 69 on “TV II” (remember “Connect the goddamn dots!”) and also addressed on From Beer to Eternity in “Side F/X Include Mikey’s Middle Finger (TV4).” Only in keeping in step with the themes of the album, the rattling percussion sounds like gunshots and the sound bytes reference racism and gun control: “This is Klan territory, so I think that kinda says it all.”

What keeps Amerikkka so direct and intense is Jourgensen’s dedication to and adherence to his subject matter, and his willingness to explore various musical techniques. In the thrash gem “We’re Tired of It” the rapid-fire rhythm is mimicked by some insanely fast turntablism. And the lumbering, foreboding “Game Over” is embellished with whirling keyboard, tumbling beats and echoed chants of “I’m on a mission.”

Throughout Amerikkkant, Ministry let the story of America’s decline — and hopeful resurrection — unravel like a pile of blood-soaked bedsheets tied together and dangling from the window of a shot-up building, and Jourgensen plays the conductor of an apocalyptic symphony, metaphorically shouting “Burn, baby, burn.”

The cinematic title track, which wraps up the album like the rolling screen credits at the end of a movie, contains bleating horns and the “Mad as hell” line from the cult film Network, but it’s Jourgensen’s mid-paced vocal that sums up the spirit of the rebellion and the need for action: “Well, I heard some news today/ I guess we’re going to war/ We don’t know who we’re fighting/ We don’t know what we’re fighting for.”

Over the past 30-plus years, even when Jourgensen has lost his way, he’s remained mad as hell and dedicated to fighting the system. Maybe his messages rang out most clearly when Reagan and the two George Bushes were heading the executive branch, but that wasn’t because there was more to oppose back then, it was because he was too fucked up to create or care when he made music during Obama’s tenure.

The bottom line is, Jourgensen’s been an oppositional force and a source of discord and upheaval since he first picked up a keyboard, and while he’s always been left of center, he’s never trusted any form of government.

When he got clean 15 years ago, Jourgensen became less introspective than he was on Filth Pig and The Dark Side of the Spoon, but he was hardly a modern citizen — and who would want him to be? The world needs its rebels. Even today, when Al says he’s a model citizen who has cut down his drinking and relies mostly on weed for relaxation, there’s still plenty of fight left in the old curmudgeon. Only now, he’s not just railing against what he sees in front of him, he’s creating messages that might steer us towards some sort of solution.

Whether Jourgensen realizes society is spiraling down the drain so quickly the only way to reverse course is to stand up and be counted, or whether he’s doing what he does best and opposing the system just for the hell of it, he’s gotten inspired to subvert the norm in a way that’s both musically satisfying and rebellious as ever. All the weed in the world won’t chill Jourgensen out. Till the political censors shut off the power and pry his guitar and soundboard from his calloused fingers, he’ll remain mad as hell and he just won’t fucking take it — regardless of who’s in the oval office.