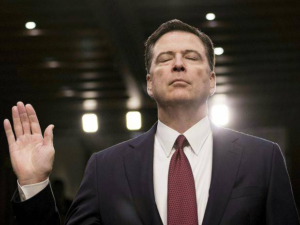 On the heels of a criminal referral by 11 House Republicans yesterday of various deep staters, including former FBI Deputy Director, Andrew McCabe, former FBI Director James Comes, former Attorney General Loretta Lynch, and others, the Justice Department’s Inspector General has referred Andrew McCabe, Comey’s former number two in command, to the U.S. Attorney for Washington D.C. for criminal investigation based on a lack of candor in discussing his disclosures of the Clinton Foundation investigation to the Wall Street Journal, disclosures the IG has found were not permitted under the “public interest” exception allowing disclosure of ongoing investigations.

This suggests the IG will or should refer Comey next for criminal investigation. House members found, in their referral to AG Sessions, FBI Director Wray, and U.S. Attorney Huber that Comey provided to a friend of his four of seven memoranda, “encouraging him to detail the memos to the press.” Four of the seven memos were classified. House members found that it appeared classified material was leaked, in violation of federal criminal law.

Given that McCabe has been referred by the DOJ’s IG for disclosing an investigation without an appropriate and permissible exception, all the more, Comey should be similarly referred for potentially leaking classified information. Indeed, Comey testified “I asked a friend to share the content of the memo with” the press.

Since McCabe has been referred, shouldn’t Comey similarly be referred for leaking classified information, and misleading Congress under oath about his decision not to refer Hillary Clinton for prosecution before he even completed his investigation, with 17 potential witnesses, including Hillary, yet to be interviewed?

Time will tell if Comey remains the Deep State’s homey.