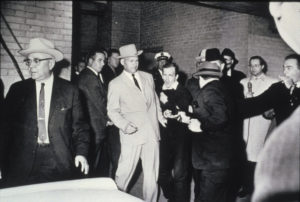 “I am afraid, based on my own experience, that fascism will come to America in the name of National Security.” – Jim Garrison

Something inside told me that I should, after a decade or so of looking into the JFK assassination, finally go out to my favorite used book store and grab a copy of Jim Garrison’s book, On The Trail of the Assassins.

In this remarkable firsthand account, the fabled District Attorney of New Orleans uncovers how he and his young, ambitious prosecution team went about investigating the JFK assassination when most of the country could care less about a conspiracy. Their weapons of choice: the Constitution of the United States and good old fashion detective work.

Among some of the more groundbreaking truths detailed in his shocking chronology of their investigation include Garrison’s finding that “Lee Harvey Oswald was a C.I.A. recruit-an agent provocateur – who soon became their “patsy,” how Kennedy’s motorcade route was changed the morning of the assassination to pass the Texas School Book Depository where Oswald had been working for over a month, the fact that Jack Ruby had reputed ties to both the F.B.I. and the mob, and how before its release to the Warren Commission, the F.B.I. reversed two crucial frames of the Zapruder film to create the false impression that a fatal shot to Kennedy’s head had been fired from behind.” (Warner Books, 1988)

Not surprisingly, these same agencies persuaded President Trump-back in October 2017 – to hold off from releasing every last JFK document in the archives until a further review could be conducted. Under pressure from Mike Pompeo and others, the president opted to go back on his word and feebly provide these intelligence agencies six more months (after 55 years) to stall, whitewash, and prep for fallout.

So here we are. The wait is over. It’s been six months.

Back to Garrison for a moment. He was a national hero who was smeared, physically threatened, vilified in the press, and ultimately railroaded by the most powerful forces within the United States government. This book should be seen by every American schoolkid and adult as a patriotic, triumphant act of legal justice and fearless journalism. When I think about Garrison, I think about the countless researchers, writers, witnesses, and documentary filmmakers who have sacrificed time, money, and personal safety to reveal the facts of Nov 22, 1963. I think of what Garrison stands for today and what he fought for then.

Like so many others, he sacrificed too much for his memory to be disgraced by endless moral inaction. So here we are. The wait is over. The country has been waiting since 1963. I recently learned that some FOIA requests lists on spreadsheets close to 23,000 files. Let’s have them now.

There will always be reasons not to do it. Stormy Daniels, the Mueller investigation, North Korea peace talks, chemical weapons in Syria, and the midterms election are all trending. But there will always be international and domestic crises to handle. There will always be reasons not to bother with the JFK death event. In the last 55 years a man walked on the moon,Viet Nam and Watergate dominated the headlines, the Berlin Wall came down, Apartheid in South Africa stopped, Y2K, 9/11, wars in Afghanistan and Iraq, and the rise of social media and the internet all transpired while these documents remained hidden from the eyes of the American people.

There will never be a more or less hectic time to release the documents than now. President Trump will never be less or more vulnerable than he is right now. The time for excuses, dodges, and tricks is over.

In the words of George Washington, “Truth will ultimately prevail where there is pains to bring it to light.”

God only knows the pains to bring the truth of JFK’s murder to light. Lives have been transformed and tarnished. People have been murdered. Entire organizations have been forced to compromise their most sacred values. The wait is over. The time is now.