mallville” actress Allison Mack pleaded not guilty to sex trafficking and conspiracy to commit forced labor charges as part of an alleged sex cult in a federal court in Brooklyn Friday.

Mack, 35, appeared before a judge “looking unkempt and gaunt.”

She was wearing jeans, a denim shirt and holding tissues, CBS 6 Albany reported.

The judge refused a request by her lawyers to release her without bail.

A bail hearing will be held Monday. 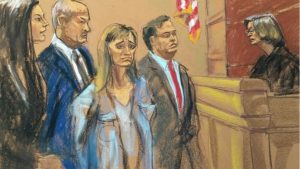 Compare the sketch with the pic of the woman on the cover of the New York Post today. 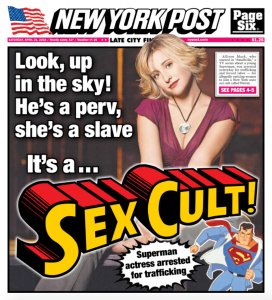 Allison Mack experienced Executive Success. She experienced what happens to all who come in contact with Keith Raniere. She is the first of his followers to go to jail. There will be others. To the extent that they helped Raniere they are going to be arrested.

Clare Bronfman – now currently in charge of NXIVM and leading the sex-slaver cult is next.

If she is arrested – the cult will fall like a house of cards since she is financing the entire operations now. They can recruit no one.

She is holding them together in her parsimonious and authoritarian and brutal way.

Nancy Salzman and Lauren Salzman are almost powerless to hold the slaves together and no new recruits are possible.