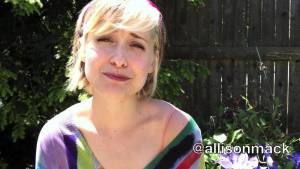 Allison who has been charged with sex trafficking and forced labor conspiracy is out on $5 million bond and under home arrest and living with her parents in California. She is forbidden contact with any NXIVM members.

“There is a ‘Very Interesting’ tidbit in the Vice article where cult expert Steve Hassan is interviewed about NXIVM. Hassan says he has worked with ex-members. These ex-members report that they have no memory of their very first meeting with Keith. These are 2-4 hour meetings. Hassan thinks Keith used NLP. But I suspect hypnosis, based on Toni Natalie’s experience. Hypnosis is bad enough. But is it also possible that Keith pulled a “Bill Cosby” on them while they were “unconscious?” [i.e. used some kind of drug].

Hassan admitted to Berman that he is working with ex-NXIVM members. His profession forbids him to name who they are.  In fact, he might be working with a current NXIVM member – Allison Mack – who by the terms of her bail is forced away from contact with any NXIVM people past or present.  [Her Vanguard she cannot see or speak to for he in jail awaiting trial].

Mack may be unwillingly enduring deprogramming efforts as a condition imposed by her sadder but much wiser [and poorer] parents.

If this is true, Hassan may do much more than deprogram her. He might save her from years in prison. If Allison could discover a reality that her Vanguard was a selfish, despicable, brute who stole her life from her – she might be more inclined to support the cause of justice and assist the DOJ in their effort to get justice for the many victims of Raniere.

Allison seems to be in that twilight world of being part victim and part victimizer.  She hangs in the balance. That balance could tip toward or against her.  If she assisted the DOJ with honest information and forthright testimony, she might get a reasonable plea offer that could spare her a decade or more in prison. On the other hand if she goes into the night lying for Raniere to save him – as she has been taught or programmed, then I rather doubt she will be acquitted and the sentence will be harsh indeed. It may be 15 years or longer.

Let us pray for Allison and for Hassan.  From what I am told, Allison is a most brainwashed customer.

The Daily Beast has a story about the Perennial Beast – Clare Bronfman.

A reader, Empty Wood writes — Mr Parlato, not sure if you are aware but this was released recently.

http://media.aclj.org/pdf/Full-Clinton-Email-production-Mar-Apr.pdf
New Clinton state dept emails.  In it is a peculiar one between Doug Band (Clinton foundation) and Huma Abedin that mentions Salinas.
I thought of NXIVM immediately.  Anyway, hope it helps.

The Knife was a little sharp as it dug into Elon Musk.

The site is the Knife Media [formerly Knife of Aristotle] of course.

Click here to post a comment
Phony Russia Gate, Roger Stone & the lies of Randy Credico
DOUBLE STANDARD: CNN, MSM NOW CARE ABOUT THE SUBSTANCE OF LEAKS, AND NOT THE LEAKING ITSELF.