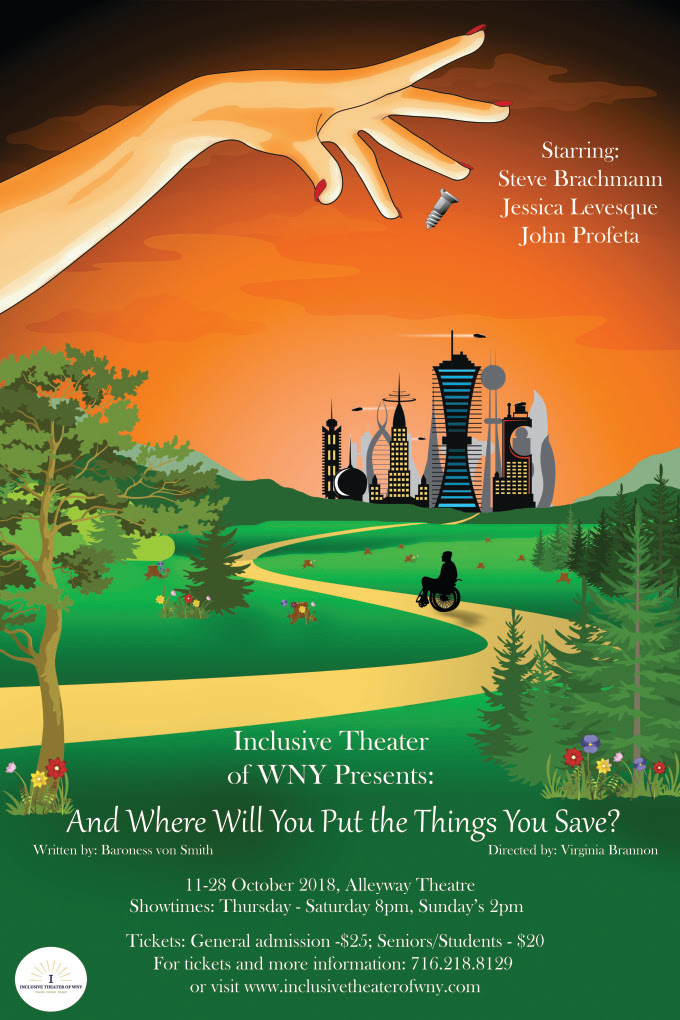 Inclusive Theater of WNY (ITOWNY) is proud to present the powerful play written by local playwright Baroness von Smith, And Where Will You Put the Things You Save? on the Main Stage at Alleyway Theatre, October 11 -28, 2018.

Presented by local Director Virginia Brannon, And Where Will You Put the Things You Save? Features local actors Steve Brachmann, Jessica Levesque, and John Profeta and is produced by Inclusive Theater of WNY.

“Nick Moeright is a criminal defense lawyer who has had an accident that has made him a wheelchair user. The night before his comeback case, he discovers that his sister, Ericka, for whom he has recently become responsible and who has high-functioning autism, has been bio-hacked. Willingly! Nick plans to confront the people who did it—just as soon as he can find them.

Alex, Nick’s fiancé, argues that it’s Ericka who’s responsible, both for the bio-hack and for herself. It’s another strike for Nick when, while recovering from his accident, Alex began to radicalize and has now become, inarguably, an eco-terrorist. The increasing pitch of Alex’s activism threatens a rift between the two men even as he works to strengthen the relationship between Nick and Ericka and also help guide Nick through his final stage of healing – acceptance.

But when Nick finally confronts the bio-hackers, it’s Alex who needs to accept the unexpected and unsettling outcome.”

And Where Will You Put the Things You Save?

MISSION OF ITOWNY: Inclusive Theater of WNY (ITOWNY) seeks to reimagine our society through producing original scripts in our ongoing writing group and year-round workshops, utilizing existing plays, and through the production and performance of those scripts with actors who are chosen solely on their ability and passion.  The organization’s dream is not only to be a place where diversity is the norm, but also to challenge societal perceptions of difference and begin to create a world in which people are accepted and encouraged to contribute to society, no matter their age, physical condition, race, nationality or gender.

The Sabres Want You Back… Yeah, Really!
Brandon Prinzing & The Old Revival Break Hearts in Video for “Bitter Cold
Comment