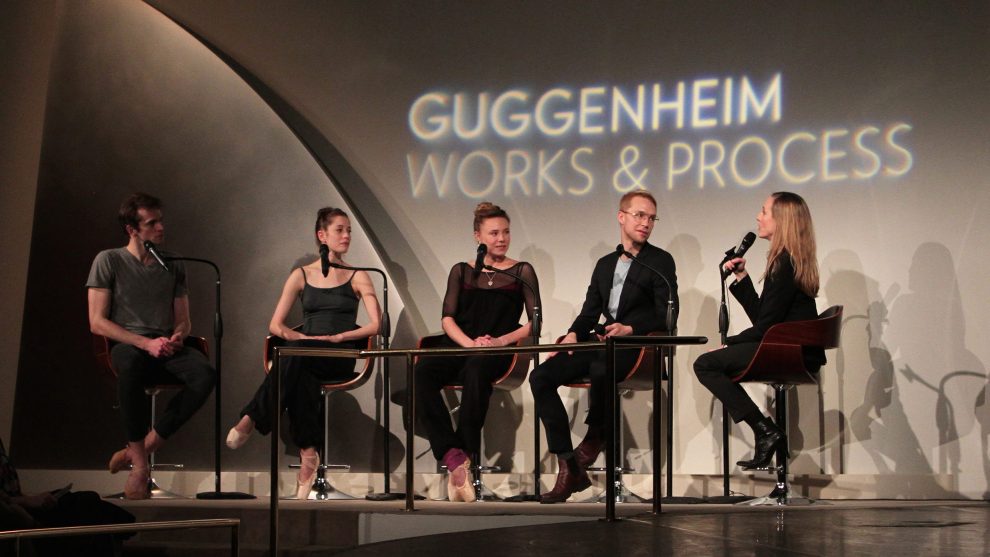 Works & Process, the performing arts series at the Guggenheim, presents the annual Holiday Concert in the rotunda of the Guggenheim on December 16-17, 2018 at 7pm.
Celebrate the season with the joyous sounds of holiday music and a new Works & Process commission by composer Sarah Kirkland Snider, inspired by the Guggenheim’s exhibition Hilma af Klint: Paintings for the Future. George Steel conducts the Vox Vocal Ensemble in what has become a beloved annual tradition in the museum’s iconic Frank Lloyd Wright-designed rotunda. The evening includes traditional carols for all to sing.
Video Preview – https://www.youtube.com/watch?v=9I9Iw3vti2g
TICKETS & VENUE
FLOOR SEATING: $45, $40 Friends of Works & Process and Guggenheim members.
RAMP STANDING: $25, $20 Friends of Works & Process and Guggenheim members.
Box Office (212) 423-3575 or worksandprocess.org
Solomon R. Guggenheim Museum
1071 Fifth Avenue, New York
The museum will close at 5:45pm and reopen at 6:45pm for the concert.
DINING
The Wright restaurant will be open for dinner before both performances. To make reservations, visit https://www.opentable.com/the-wright.
ON VIEW
The Guggenheim’s exhibition Hilma af Klint: Paintings for the Future will be on view for all to see.
Lead funding for Works & Process is provided by The Florence Gould Foundation, The Christian Humann Foundation, Mertz-Gilmore Foundation, Stavros Niarchos Foundation, Rockefeller Brothers Fund, and the Evelyn Sharp Foundation, with public funds from the National Endowment for the Arts and New York City Department of Cultural Affairs in partnership with the City Council.
Recently deemed “one of the decade’s more gifted, up-and-coming modern classical composers” (Pitchfork), “a potentially significant voice on the American music landscape” (David Patrick Stearns, Philadelphia Inquirer), and “an important representative of 21st century trends in composition (New York Classical Review), composer Sarah Kirkland Snider writes music of direct expression and vivid narrative that has been hailed as “rapturous” (The New York Times), “haunting,” (The Los Angeles Times), and “strikingly beautiful” (Time Out New York). With an ear for the poetic and the architectural, Snider’s music draws upon a variety of influences to render a nuanced command of immersive storytelling. Of her orchestral song cycle, Penelope, Pitchfork’s Jayson Greene proclaimed: “Snider’s music lives in…an increasingly populous inter-genre space that, as of yet, has produced only a few clear, confident voices. Snider is perhaps the most sophisticated of them all.” Snider’s works have been commissioned and performed by the New York Philharmonic, the San Francisco Symphony, the National Symphony Orchestra, the Detroit Symphony Orchestra, the Indianapolis Symphony Orchestra, the St. Paul Chamber Orchestra, and the North Carolina Symphony; the Residentie Orkest Den Haag, Aarhus Symfoniorkester, Britten Sinfonia, and National Arts Centre Orchestra; violinist Anne Akiko Meyers, percussionist Colin Currie, and vocalist Shara Nova (formerly Worden); A Far Cry, Ensemble Signal, The Knights, yMusic; Roomful of Teeth, Cantus, and Trinity Wall Street Choir; and many others. Conductors who have championed her work include Andreas Delfs, David Danzmayr, Andre dé Ridder, Giancarlo Guerrero, Grant Llewellyn, Rossen Milanov, Edwin Outwater, and Leonard Slatkin. Her music has been heard in concert halls around the world including Carnegie Hall, the Elbphilharmonie, Lincoln Center, the Kennedy Center, and Wigmore Hall; and at festivals such as Big Ears, BAM Next Wave, Aspen, Ecstatic, Colorado, Cross-linx, Sundance, BAM’s Crossing Brooklyn Ferry, Bang On a Can Summer, Liquid Music, 21C Liederabend, SONiC, New York Festival of Song, and Zurich’s Apples & Olives. Penelope, her acclaimed song cycle inspired by the faithful wife in The Odyssey, has been performed over forty times in the United States and Europe.
George Steel is a NYC based musician who has been working in New York and around the world for 25 years as a conductor, a composer, a producer, a singer, a pianist, a musicologist, and a teacher. He is founder and conductor of two groups, the Vox Vocal Ensemble (1990) and the Gotham City Orchestra (1998). Some of his notable concerts include Stravinsky’s orchestral music at the Park Avenue Armory, Bach’s B-Minor Mass in New York and at Caramoor, Feldman’s Rothko Chapel in a live radio broadcast, “Treasures of the Sarum Rite” with the Trinity Church choir, and an all-John Zorn program in Helsinki with the Avanti! Orchestra. Steel is active as a composer of both concert music and musical theater. In 2016, for his work as a composer/lyricist, Steel was awarded the BMI Jerry Harrington Award “for outstanding creative achievement in musical theater.”. His commissioned concert work “The Three Kings” received its premiere in the rotunda of the Guggenheim Museum in 2012. The New York Times described it as “a raucous dance party, complete with percussion outbursts and syncopated brass rhythms.”
The Vox Vocal Ensemble, called “superb” by the New York Times, was founded by George Steel in 1992 to perform the music of the sixteenth and twentieth centuries. Since that time, Vox has become one of the most sought-after vocal ensembles in New York, performing in such varied contexts as an all-Stravinksy festival at the Park Avenue Armory, acclaimed performances of Bach’s Mass in B minor in New York City and at Caramoor, and in a Nico Muhly portrait concert at Carnegie Hall.
Works & Process at the Guggenheim
Described by The New York Times as “an exceptional opportunity to understand something of the creative process,” for over 34 years and in over 500 productions, New Yorkers have been able to see, hear, and meet the most acclaimed artists in the world, in an intimate setting unlike any other. Works & Process, the performing arts series at the Guggenheim, has championed new works and offered audiences unprecedented access to generations of leading creators and performers. Most performances take place in the Guggenheim’s intimate Frank Lloyd Wright-designed 285-seat Peter B. Lewis Theater. In 2017, Works & Process established a new residency and commissioning program, inviting artists to create new works, made in and for the iconic Guggenheim rotunda. worksandprocess.org.