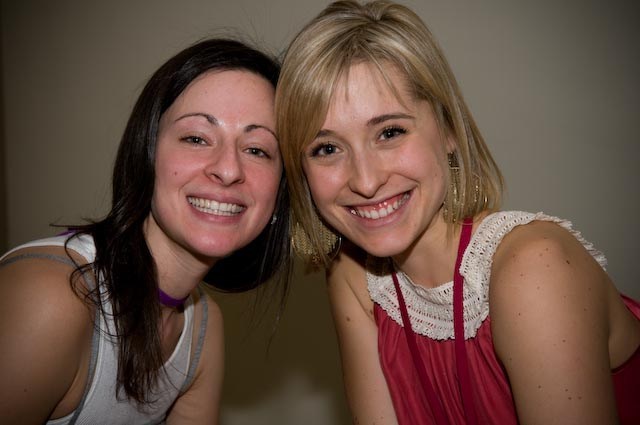 In my opinion – to reiterate the headline – both Allison Mack and Lauren Salzman deserve both mercy and leniency from US District Court Judge Nicholas G. Garaufis, their sentencing judge.

They may have done some ugly things, and they made allocutions before the judge to doing criminal things, while following their master.

They did not intend to be criminals, in my opinion.  I believe, they followed their master, Keith Alan Raniere, because they believed in his goodness. They were wrong and both of them lost years of their lives because of their mistake.

Allison lost 14 years, from 2006 to the present. She was 23 when she came to Raniere. She is now 37. And her torment is not over. She will forever be remembered as the actress who joined a vicious, sex-slaver cult.

Her fame works constantly against her. It will be hard to find obscurity. Kathy Russell, or example, or even Lauren Salzman, can go to most places in this country and not be recognized. No one knows their names. They have a chance at living private lives, when their sentence is over.

But Allison, almost everywhere she goes, for decades to come, will be recognized. If not for her work on Smallville, for her notoriety in the cult. She cannot step out anywhere without being recognized and perhaps taunted, heckled, admonished.

She wanted to move forward with her life. Find a husband, find a career. But her mother wanted her to be involved in Nxivm, then known as Executive Success Programs. She told Lauren to stay with Nxivm for six months and if she did not like it, she could move on and Mama would pay for her college or help her in whatever she wanted to do next.

Perhaps one cannot blame the mother. She believe in it too. She thought she was building something noble and profitable and that Lauren could rise in the family business.

In less than six months, Raniere started playing with her life.  She was 22, he was 40. He seduced her. He manipulated her to move out of her mother’s house. She promised her a child, and that she would be his number one wife or lover.

Lauren stayed with him right up to the moment of his arrest in 2018, a full 20 years, and for more than two years after his arrest, she is still being punished. She was indicted. She was headed for trial. She took a plea deal and consented to cooperate with the feds, and, as the world learned, she bared her whole story at trial, in days of damning testimony, which impaled the creature, caused jurors to cry and the judge to actually suspend her cross examination when she herself went into a fit of uncontrollable tears and headed toward a total breakdown.

It was probably the most impactful moment of the entire six weeks of trial. And if there were any jurors with any doubt about the need to incarcerate the monster, it most assuredly left them at that moment when the tears of a woman deceived for two decades flowed down her face and she cried before them uncontrollably, almost hysterically, as the force of what this monster did to her and for whom she had sacrificed all, became apparent to anyone who was present.

Lauren logged in 22 years of being in the dark shadows of Raniere, or in anticipation of being punished by the law, because of her devotion to Raniere.  Allison and Lauren lost the best years of their lives to the sinister Raniere.

Allison gave up a lucrative and successful acting career in 2010, because she believed Raniere had a higher calling for her.  She left her star role in Smallville, and moved to Albany, eschewing other acting roles in order to spend more time near Keith, learning what she thought were his deeper truths and thrilling to the idea that she could be part of a life and world changing mission.

She wanted to share this joy with others. She was not looking to deprive others of joy. She wanted to share what she thought was the golden vision of Keith Raniere, as if he was some unique godly man akin to Gandhi or Buddha or Christ.

Think of this. She had a million dollar a year career, and adoring fans and because she thought his teachings and the man himself were what the world needed, she gave up her career as it were mere tinsel puff and sold all she had in effect and followed him.

Lauren also gave up her whole adult life, always on the verge of believing she would be his wife [or one of his wives – she believed herself unworthy to be the sole wife of one so exalted] – and that she would bear his child.

A pathetic story is told of Lauren. In her house she set aside a nursery with all the items one would equip a nursery with, for a child that never came.

So what about punishment?

Let’s look at the reasons to not punish either one of them.

I do not believe either of these women are at high risk of being repeat offenders. Not now. Both women have suffered fear and torment for years by their harrowing prosecution, and both women suffered for years under Raniere.

Both women were there at the day of Raniere’s doom, the day he was arrested in Mexico. Lauren had machine guns pointed at her head, and only then revealed where Keith was hiding – which was in a closet.

Yes, they had good days and happy days with Nxivm. They had a community, they had sisterhood, they had love. They had a shared ideal, a mission they believed would somehow improve the world.

And they had moments with their lover, Keith, the man they thought loved them more than anyone else.

They did not know, what we know now, what they too know now — that Keith was out to destroy them, semi-starve them, sleep-deprive them. Hypnotize them, manipulate them, lead them to utter ruin for his own joy and he succeeded. The only thing the “world’s smartest man” forgot was that, as he set out to destroy others, especially those who loved and trusted him, was that he was also laying the foundation for his own destruction.

He got the worst if it, after all. He is the only one among the Nxivm convicts likely to die in prison.

While Raniere must be incarcerated [and he has been in custody for more than two years, and will likely be sentenced to decades in prison – and he is almost 60, so it may mean a life sentence] what good will it do for anyone to incarcerate Lauren or Allison?

It will take them years to heal as it is, and no amount of time in a physical prison will speed that up. In fact it will only retard it.

While I agree that Raniere must get a long prison sentence to prevent him from harming others, I do not see any risk of Allison or Lauren – both followers, not leaders – harming others.

Perhaps a fair sentence might be probation, or, if need be, home arrest, followed by perhaps a ban on joining any life-coaching companies, or cults [if they can be defined] and providing any kind of therapy to others, as they did in Nxivm.

It might also be good to ban them from getting branded, of branding others, and offering nude photographs or taking them and of giving or taking confessions for collateral.  It might be further suggested that they avoid anyone who proposes that they join a women’s empowerment sorority led by a man who also requires blackmail to ensure members’ silence.

This is not facetious. But, if it could be assured somehow that they would avoid any kind of a situation where they could be misled into enabling another cult leader with seriously destructive tendencies, then I ask, what harm could they do to society?

They were enabler, not initiators.

The very nature of the absurdity of the above, the things they did, show me they are victims more than perpetrators.

If Allison or Lauren had not been branded and had not given blackmail material to Raniere, I think one could argue that they were not victims. But, it is a fact that they did the same things the victims did. The only one in DOS who did not give collateral was Raniere. Allison and Lauren were subject to the same coercion that the other, indisputable victims were subject to.

This makes them, at least in part, if not large part, victims. And victims deserve mercy.

The time has come to close this ugly chapter and place the blame on the man who devised it all, who led everyone, the man who did not place his name on anything because if the law came down he thought it would absolve him of culpability. He was wrong.  Justice was right. He was the one man who deserves all the blame and all the punishment for Nxivm. He is the “but for whom” – none of this would have happened.

Had Allison or Lauren not met the monster, I doubt they would have gone about branding women or engaging in racketeering enterprises. Their mistake was following a satanic creature who had the ability to fool them into thinking he was divine.

Allison would have gone on to perhaps greater stardom, and Lauren, intelligent and personable, would have a career and a husband, and children now.

They were fooled no doubt. But they were not deep down evil. They did not intend to be evil. They did evil because they abandoned their consciences and subjugated them to Raniere, substituting Raniere as their ethicist.

He made moral decisions for them.  As such, they abandoned intellect and morality to what they thought was a higher, more noble intellect and superior morality. When they did not understand the reason for what seemed to be wrong actions he dictated, they subordinated their own thinking to his, thinking that he knew best, because he was better and higher than they.

To me this madness on their part, this colossal mistake, obviates intent. They did not intend to commit crimes. They felt they were obeying a higher power.

They followed Keith Raniere as he ravaged their lives.

I think it is enough. Their punishment is a ravaged life which will be hard to ever put back together.

I would hope that the judge would consider a downward departure in sentencing and let their shame and sorrow and the waste of years be punishment enough. The cage for these women, who have repented of their gruesome mistake, is not only unnecessary, it is barbaric.

As it is, their punishment, without incarceration, will continue for haunt them perhaps for the rest of their lives, in the shame and cognizance of their foolishness and misguided love. They might learn to forgive themselves more easily if society, as represented by the judge, offers them leniency and mercy, symbolic of forgiveness.

They sought the divine in Raniere, a most unforgiving creature, and with a dose of mercy by one who has the power of punishment at his command, they might touch closer to it, for mercy is perhaps the closest that human beings can get to the divine.