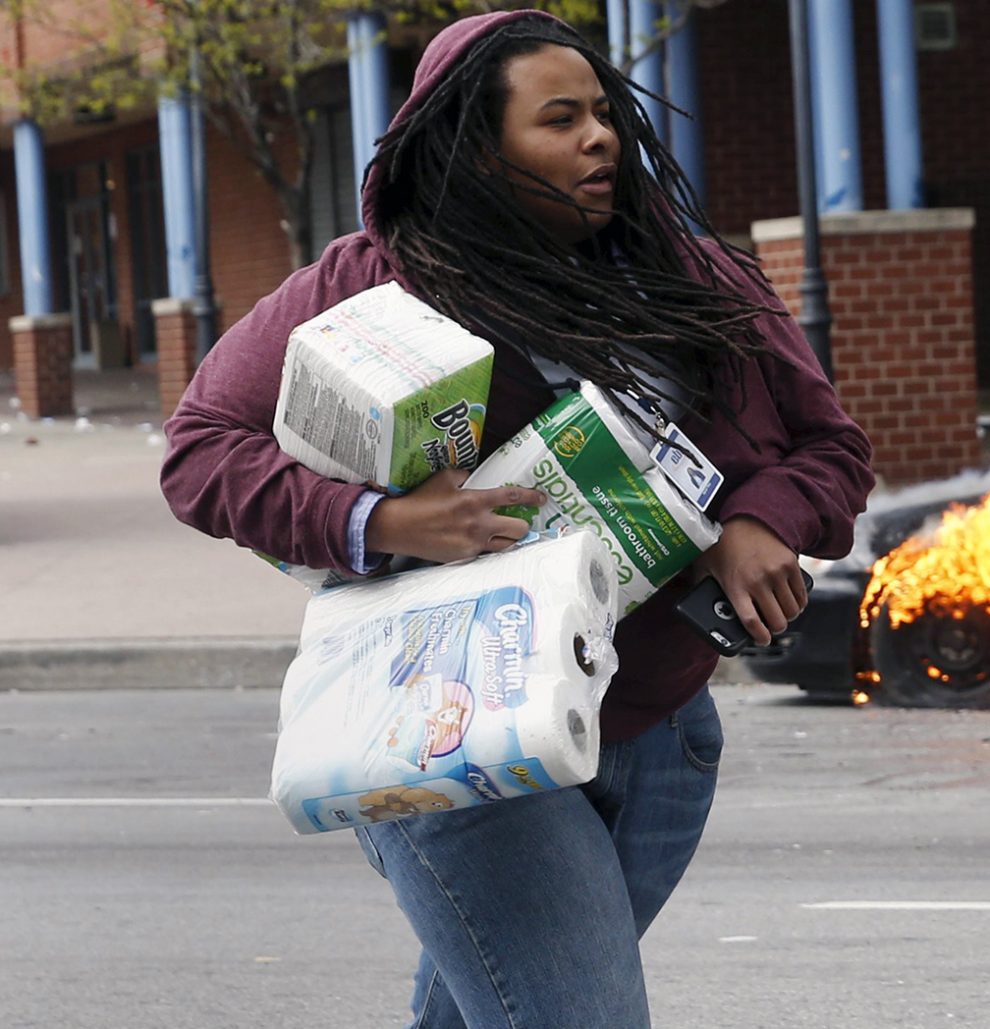 Following the brutal filmed murder of George Floyd by Minneapolis police, Trump called some of the protesters thugs and tweeted that “when the looting starts the shooting starts.”  Yes, a few those protesting broke some windows and stole some diapers, some got detergent, one man looted a carton of eggs. As dozens of pictures of looters in Baltimore started coming in, we noticed something surprising: People weren’t stealing expensive items. They were running off with basic necessities like toilet paper, feminine products and diapers.

These rioters were very disorganized criminals.

Meanwhile, “organized crime” carried on as usual, figuring out how to use legislators to enrich the wealthy at the direct expense of everyone who pays taxes.

The coronavirus bailout funds went in dribs to some average Americans. I was lucky enough to get $800 and many people I know have gotten nothing. Meanwhile, Trump’s family businesses and his close associates received more than $21 million and many other wealthy people got huge checks from the “CARES” Act.

That is organized crime.

Pro Publica – The CARES Act Sent You a $1,200 Check but Gave Millionaires and Billionaires Far More

Part of the reason Trump was elected in the first place was a scam by Trump crony Roger Stone and Wikileaks and the Russian intelligence operations to steal and make a big “Lock her up!” deal about Hillary Clinton’s emails accompanied with a relentless online social media campaign to disparage Clinton. Of course that was ultimately a series of false claims, a nothingburger that continues to be quashed in courts when it reappears in rightwing zombie acts of endless harassment.

As a result of his actions, Stone was convicted in court of seven felonies, all of which related to helping Trump steal the 2016 election. Stone came under scrutiny in 2016 when he communicated with individuals known by the FBI to be Russian intelligence officers and when he claimed adance knowledge of the Wikileaks release of emails stolen by those Russian intelligence officers. The Mueller report “established that the Russian government perceived it would benefit from a Trump presidency and worked to secure that outcome.”

Robert Mueller said in a recent Washington post op-ed: “Congress also investigated and sought information from Stone. A jury later determined he lied repeatedly to members of Congress. He lied about the identity of his intermediary to WikiLeaks. He lied about the existence of written communications with his intermediary. He lied by denying he had communicated with the Trump campaign about the timing of WikiLeaks’ releases. He in fact updated senior campaign officials repeatedly about WikiLeaks. And he tampered with a witness, imploring him to stonewall Congress.”

Stealing the US presidency? Now that too is organized crime.

Getting a big assist from the crime lords at the Russian GRU intelligence agency, getting the cooperation of the sloppy data thieves at Wikileaks, that is a planned master criminal enterprise.

With the mob boss in the White House wielding a pardon pen, the circle is complete as Trump commutes the Stone sentences and pardons Flynn. Sorry, Mafia, you guys are amateurs compared to Trump, Stone, Flynn, Mitch McConnell, and the crew at the top. Gangsters and thieves everywhere should be taking notes.

During the workup to the Republican tax cut bill back when Trump had all branches of government doing his bidding, we heard lots of empty promises about lowered taxes, no impact on the deficit, and increased investment in US manufacturing.

The House Budget Committee assessed the losses to the American workers and middle class alongside the massive gains for the wealthy as the tax law went into effect and really, that is seriously organized crime, looting from the taxes collected from working Americans at stunning levels.

Is this what America wants? Thugs in the White House and Senate? Because that is who is in those places now. A catalog of crimes committed by Trump and associates is thick and growing by the day. It’s governance by gaslighting and ruling by lawlessness.

I hope we can get just and correctional about all this in November. Instead of “when the looting starts, the shooting starts,” I hope we can vote in much better. “When the stealing ends, the healing mends,” feels like a better model.

Breaking windows and ripping off cleaning products is beyond stupid but, after all, we only see such riots every 40 or 50 years, while the real looters, the ones in charge, are ripping you off every damned day.