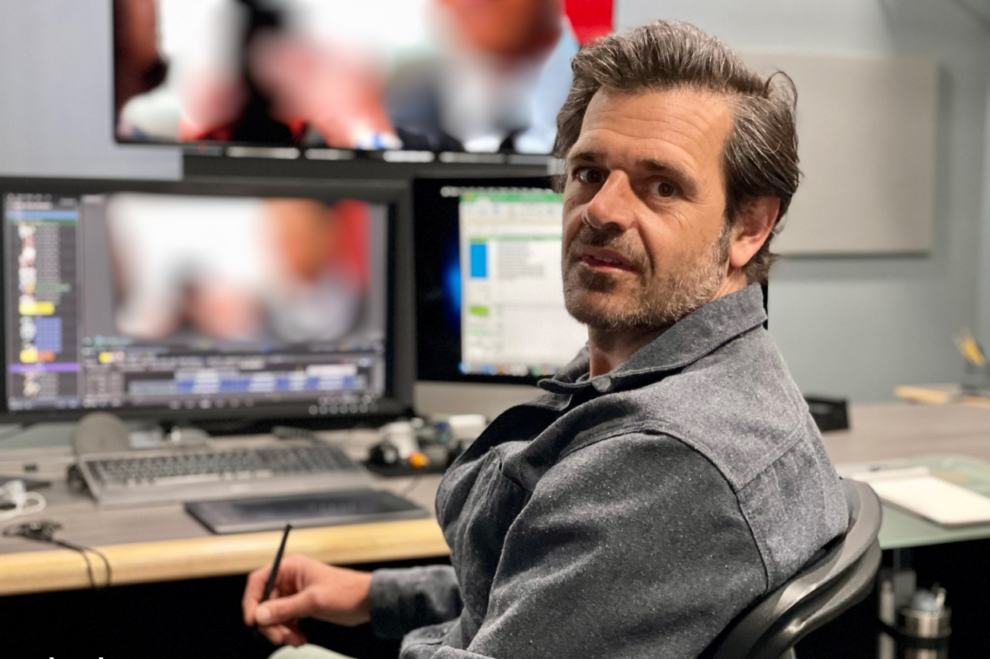 We sat down with VFX pro Gurvand Tanneau to talk about his career and his work on the Chicago television franchise.

Visual effects, often shortened to VFX, encompasses a huge range of specific disciplines, despite the fact that most people today tend to associate the term with CG effects work.

Advances in VFXsince at least the early 1990s have allowed digital effects and on-screen elements to become less and less noticeable as ‘coming from a computer.’

These advances have also greatly raised the bar for VFX in television shows, and there are now plenty of shows that look just as good as, if not better than, some major big-budget blockbuster movies.

Television VFX is what we’ll be looking at today, with the help of a longtime VFX pro who has a very impressive back catalog of various types of VFX work.

Among his many skill sets, Tanneau is also a Flame Artist, a highly sought-after title within the entertainment industry.

If you’re wondering what a Flame Artist does, it has nothing to do with practical pyrotechnics. Rather, Flame Artists are masters at using a highly-advanced piece of VFX software called Flame, creating incredible results in the process.

Tanneau has worked on many music videos, feature films, and commercials. His commercial work, in particular, includes projects for some of the largest and most well-known brands in the world.

While Tanneau’s professional history is extensive, today, we’ll focus on his experiences working on the Chicago series of television shows from NBC, including Chicago Fire and Chicago Med.

For anyone who doesn’t know what VFX work actually involves, this discussion will certainly be enlightening.

Tanneau wasn’t working with the Chicago Med and Chicago Fire teams from the very start.

The shows had already been running for a number of years when Tanneau’s previous work attracted the attention of Scott Rader, the owner of SpyPost, a creative studio that was working with NBC on these shows.

“My first contact was with the owner of SpyPost, Scott Rader, who I met through my agent. Scott was looking for a freelancer to help at the end of a season. I’ve been working with him ever since, on every season.”

It takes a lot to go from a temporary position to a consistent role on a major TV show, let alone multiple major TV shows, but clearly Tanneau proved just how capable he was to Rader and the rest of the team.

Later on, we’ll get to some specific aspects of working on these shows, but it’s impressive that Tanneau was able to so quickly become a key part of the post-production process for major network shows.

Of course, one of the most significant challenges to joining a production or post-production team years after that show started.

Depending on the team in question, a new arrival might be treated with slight suspicion or regarded as a sign of a major shakeup.

But according to Tanneau, the transition was incredibly smooth, in part thanks to the wonderful team he was working with, but also in part because of Tanneau’s previous VFX projects.

“Working on these shows is one of the smoothest experiences I’ve had, as the team is composed of experienced artists who are very independent. I knew most of them from previous jobs, mostly commercials, and it was a real pleasure to be on the same team again. It’s essential to work with people you know you can rely on, especially when the timeline is tight.”

VFX work can often be a healthy mix between independence and communication/collaboration.

Each person is of course working on their own specific task, but, for obvious reasons, all of those tasks need to come together to form a cohesive and polished final product.

Also, for veteran VFX artists, the entertainment industry is a lot smaller than it might seem. When an artist has established a reputation for being reliable, skilled, and efficient, like Tanneau, they’ll likely be called on to work on many different projects.

Since VFX work often requires multiple professionals, there’s always at least a chance that you’ll be working with other people you already know, or with whom you’ve worked on other shows or features.

From a layperson’s perspective, completing VFX work for a television show must be more stressful than similar work for a feature film, since television shows end up creating many more hours of finished footage.

Tonneau’s comments on the topic more or less confirmed our suspicion, albeit with some added details.

“The timeline on a TV show is much shorter due to the volume of work. We definitely have to work faster than on a feature film, and with a smaller team, too. On a feature, the work is more segmented. On a TV show, you mostly have to use many tools to do everything yourself.”

Perhaps the most stunning facet of this point of comparison is that, at least to the untrained eye, the VFX work that we see in many contemporary television shows is of extremely high quality, often rivaling the effects found in major Hollywood feature films.

The idea that such high quality work can be executed with a smaller team and in less time is a bit baffling. Overall, it speaks to the caliber of VFX artists and VFX programs that are capable of pulling this off on a regular basis.

For the average viewer, there seems to be a question of just how creative visual effects professionals can be in the course of their work.

After all, doesn’t the bulk of the creative direction on a show or movie usually come from the director or showrunner, or perhaps a VFX Supervisor?

While there’s variation between all projects, Tanneau gave some notes on the areas where he’s most able to apply his own creativity and general creative thinking when working on shows like Chicago Med and Chicago Fire.

“It forces you to find creative solutions to meet your deadline. We work with a lot of stock footage elements, and the creative aspect is then in the realistic integration of these elements. It could be adding flames and smoke to a room or transforming a static car from a green screen shot to a night driving scene.”

For a myriad of different reasons, many television shows, especially shows that are very action-heavy, aren’t able to utilize practical effects for absolutely everything.

We’re glad that Tanneau highlighted the example of adding fire and smoke to a scene. In a show like Chicago Fire, this is of course a common element.

But trying to shoot one of these scenes by placing actors on a set with actual smoke and fire consistent with real-world conditions would be not only impractical but also unethical given the severe safety implications.

So a lot of the challenge and creativity comes in trying to make all of this appear realistic, natural, and exciting.

Even the technical aspects of adding effects like these involves a great deal of creative thinking, which brings us on to the next topic.

In our conversations with other entertainment industry professionals across many different roles and specializations, we’ve encountered a consistent theme, namely the importance of balancing creativity with the technical proficiency that each role requires.

So does Tanneau feel that this concept applies to VFX as well?

The short answer is yes.

“We have to find solutions to make these images as beautiful as possible, and the possibilities of the software and its tools helps us achieve that. Most of the time there are different solutions, making it possible to choose between different options to achieve it.”

In fact, we can think of successful and visually-appealing VFX as a dish requiring a precise recipe.

The vision for what’s trying to be achieved is of course very important, but to get to that vision, you also need two other major ingredients: creative thinking and the technical ability needed to execute any solutions that might come from that creative thinking.

If any one of those ingredients is missing, then you’re going to miss your deadline, or, more likely, you won’t be able to achieve the vision at all.

It’s clear that Tanneau has worked incredibly hard to get to a point where he can consistently produce incredible results. But ultimately, audiences don’t see all that work; it doesn’t show on screen.

Instead, successful VFX allows the audience to be transported to a fantastical and exciting setting without ever having to question how the things they’re seeing were delivered.

That might just be the mark of expert-level visual effects.