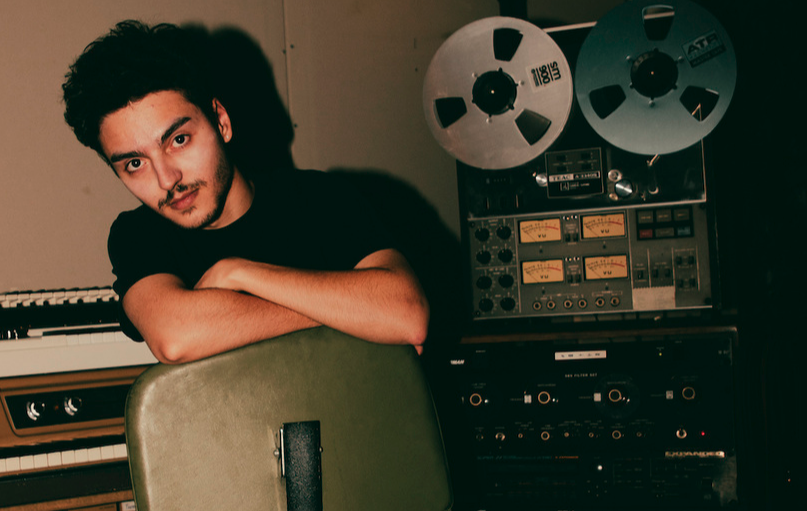 Professional drummer Antoine Fadavi is one of those rare musical talents who found industry success when he was still just a teenager.

By 18, he was performing at gigs all around Paris and was also featured in major drumming publications like Modern Drummer, Drum!, Batterie, and Digital Drummer.

He also found success on social media, collecting over a million views on his YouTube channel and building a formidable Instagram profile as well.

Ready for more, Fadavi relocated to Los Angeles, a city that remains central to the mainstream music industry.

His career didn’t skip a beat. Soon after the move, Fadavi got a job playing live with King Princess in early 2019. As King Princess took off, so did the gigs, with the stages and crowds growing to the festival level with dates at Austin City Limits, Coachella, Bonnaroo, Lollapalooza, and The Governor’s Ball.

Fadavi is extremely grateful for his career, and he’s already trying to encourage other young musicians as well.

“I’m now friends with the idols I had when I first started playing music, and that’s a pretty surreal feeling. I definitely don’t take any of it for granted, and I always encourage and support musicians younger than me to pursue music the way I did.”

It was also in 2019 that Fadavi started taking on extra responsibilities for these shows, including running backing tracks, launching songs, and building new tracks.

Fadavi soon learned that these tasks were all part of what’s called music direction. A music director is essentially responsible for the musical aspects of performances. That means making sure that everything is ready to go before and during a performance, and it also means making changes as needed so that each show is the best it can be.

Fadavi is an incredible drummer, and we highly recommend taking a look at some of his videos, but today we’re going to talk about his foray into music direction.

Thankfully, professional music director Drew Taubenfeld of Direction Music was working with the King Princess team at the time, and Fadavi saw his work as an opportunity to learn.

“It was thrilling for me to see him work his magic on our live set. That entire year, I had been wondering how what I was doing with playback was actually done by pros, and there I was, with a pro, and with as much time as I needed to learn from him. Drew was the first music director to inspire me to delve into that world.”

And delve is just what he did. Since then, Fadavi has been working as a music director and assistant music director for big industry names, adding yet another role to his already-impressive repertoire.

We thought it might be helpful to provide a more practical explanation of what a music director actually does, and we’re going to do just that, with Fadavi’s help, of course.

An apt comparison here is the work of a classical music conductor. It’s not that the musicians would be totally lost without the conductor, far from it. These are highly-skilled players who know the music backwards and forwards.

But the conductor is vital because they have a strong vision for the totality of the music, how it should all sound when put together. The conductor is centrally located so that they can hear how all of the instruments sound together, and they can make adjustments as needed.

Music directors have a similar level of responsibility, but they need to consider even more components, including the instruments and vocals as well as backing tracks and live effects. If something goes wrong with just one of these components, the show might sound a little off, or it might sound completely sloppy.

Music directors need to be very hands-on, communicating directly with the musicians and other members of the team to tighten everything up.

Fadavi spoke to the importance of a music director from the perspective of a performing musician.

“One of the toughest things to learn as a live musician is how to be critical of your performance and conscious of your stage presence. It takes a great level of awareness to know whether you are playing too soft, too hard, too fast, or too slow. A music director is a well-rounded, reliable person who understands what it’s like to be in the crowd. You can trust them to give you accurate feedback that will help you improve the show.”

In Fadavi’s music direction work, his experiences as an instrumentalist have been extremely valuable, as they give him a unique perspective. He knows what it’s like to be in the middle of the performance and feel like something isn’t going right.

Fadavi explained that, throughout his life, he’s always prided himself on being a great listener, a skill with clear utility for both performers and music directors.

When working with other artists, in any role, Fadavi is eager to learn more about them and what they do, which aids in the collaboration process.

Knowing what motivates each artist is key to Fadavi’s music direction work.

This high-level professional experience has helped Fadavi carve out his music direction philosophy, which is based on trust and positivity.

“A music director’s relationship with an artist is based on trust. You’re responsible for how an artist, their show, their voice, and their musical skills are perceived by the public. That’s why it’s so important that you understand the artists you work with, emotionally. Aside from being an employee, you need to be by their side as a friend.”

There are many different approaches to music direction of course, especially regarding communication with artists and other team members, but Fadavi staunchly supports a positive approach where everyone feels genuinely motivated to be their best selves.

Empowerment on and off stage

Looking more deeply at this topic, it’s interesting to consider music direction as being tied to a much larger concept: professional leadership.

For those who don’t work in entertainment, there might be an assumption that things operate in a completely different fashion compared to the average workplace.

This might be true on a surface level. After all, office employees aren’t accustomed to working from a different city every night, especially not with thousands of people watching, but in terms of collaboration and interpersonal communication, entertainment really isn’t that different.

Everyone needs to get along and work efficiently, resolving issues as quickly as possible to keep the quality high.

Fadavi told us that he enjoys every part of working as a music director, from looking for musicians that are just right for each part to building the live show files and arranging music to running rehearsals.

But above it all, he finds a special kind of enjoyment in the collaborative aspect of music direction. To Fadavi, it’s not just about everyone doing the bare minimum to get by, but rather creating a healthy environment where everyone involved is going to be trying their hardest every single time.

“A show is only as good as the people running it. If everyone is positive and empowers each other, then the team wants to do their best. That’s a solid foundation. My favorite aspect of working as an MD is the relationships I have with everyone. With honesty and trust, we can all make sure the foundation is cared for, and that we’re ready to face any challenge.”

This is a very humanistic approach to music direction, and it’s been serving Fadavi well.

So what is Fadavi working on right now, and what are his upcoming projects? Well, due to nondisclosure agreements, Fadavi wasn’t able to give us details about every one of his current and upcoming projects and tours, though he did say that anyone interested can keep up to date with his work through his Instagram profile.

But even just based on the work he was able to mention, Fadavi definitely has a lot on his plate these days.

Fadavi has been involved in rehearsals for Lil Nas X’s upcoming performances, including the iHeart Radio Jingle Ball Tour 2021.

As for 2022, Fadavi is going to be on the road quite a lot, supporting acts that he’s admired for years.

“In 2022, among other planned projects, I will be playing with King Princess, on direct support major arena tours for Kacey Musgraves [US dates] and Shawn Mendes [European dates]. We’re also opening for the Red Hot Chili Peppers and The Strokes on August 6 in Las Vegas, which is completely bananas. That’s definitely one of those moments when I feel like I’m nailing the game of life.”

Fadavi’s love of music has inspired him to continue expanding his list of credits and areas of expertise. Whether on stage or behind the scenes, Fadavi is creating musical waves and loving every minute of it.

How to Apply the Lessons of Pop Art Greats to Your Artwork
NEW MUSIC: London based songstress Sonia Stein releases “ZOOM OUT”