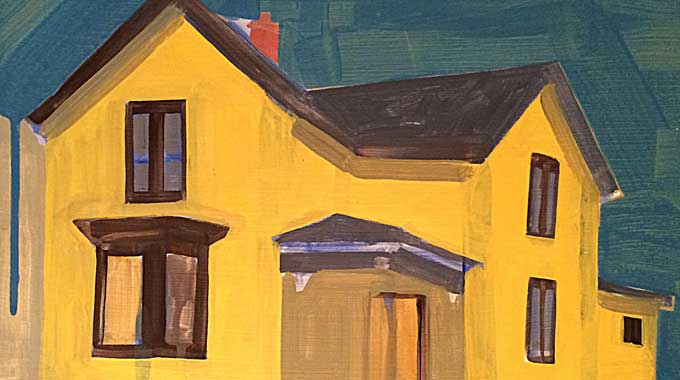 Architecture is the subject matter in paintings by Amy Greenan and sculptures by Patrick Robideau currently on view at the Indigo gallery.  Built structures as metaphors for memory for Robideu, as analogous to people for Greenan.  All very complicated, all very beautiful.

Greenan says in an artist’s statement that the houses in her paintings are abandoned.  This comes as a bit of a surprise.  Not that they seem occupied particularly, but from her sketch-like painterly way of portraying them, you couldn’t tell one way or the other.  Doors and windows might be boarded up, or maybe the artist has just left them blank.  Some are clearly blank, others seem to show door and window infrastructure.  Absence of particulars seems to be the main idea, more than condition of abandonment.  These could be Platonic ideas of houses, rather than remnants awaiting refurbishment (if that is ever to happen). 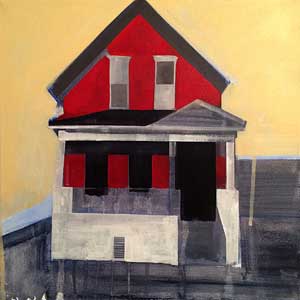 What Greenan is interested in these artworks, she says in her statement, are “perceived similarities between the houses and the human body and experience; the houses have a history, memories, and vulnerability in the same way that people do.”  Similarity to people–mostly it would seem–in the way they efface themselves.  As if to hide their history, conceal their memories from public view, mask their vulnerability.  In vain however.  The more attempted concealed, the more revealed.

One of the houses is entirely black.  A black silhouette.  One nearby is entirely white.  But the white paint is palpably an overlayer.  Underneath it you can discern–if barely–window and door frames.  Whereupon, revisiting the black example, you find you can decipher–even more barely–windows and doors there too.  Black may hide better than white.  But nothing hides ultimately.

In another part of her statement, Greenan describes her paintings as “simple narratives” into which she interweaves and then investigates “personal mysteries.”  She talks about her paint drips and obscuring techniques as contributing to “stories that reflect a very subjective truth and history.”  Not so simple at all.

Robideau has previously made huge-scale works.  A few years ago at Hallwalls, a kind of house you could walk through.  Mysterious corridors and cul-de-sacs, and ambient strange sound effects.  Intriguing and puzzling in equal measure.  The works in the current show are small-scale to minuscule-scale.  And intriguing and puzzling as ever. 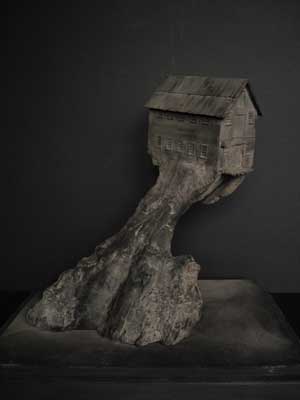 Meticulously constructed little stage sets of previous era–mid to late nineteenth century mostly–commercial and residential structures.  Some in boxes–authentic old wood and metal fastenings utility cases, works of art in their own right–some balanced on or otherwise adhered to bizarre support structures.  A brick and cast-iron construction commercial building–and cantilevered out into thin air ramp walkway up to it–situated precariously atop a dubious-looking trestle structure, atop a rocky promontory.  A domicile type building supported for the moment anyway on what looks like the crest of an ocean wave.  Or some kind of waterspout.  A depot type building and loading dock.  A movie set for an old shoot-em-up western, it looks like.

The sole non-architectural work–in the ordinary sense of the term–is a shipwreck scene, under murky waters as it were.  A cargo sailboat vaguely of the Yankee Clipper type, masts broken and strewn along with other wreck detritus around the still largely intact and elegant even in wreckage condition hull.

A passage on the artist’s website describes his work as employing architecture and space “to explore issues of memory and its emotional residue,” and talks about how the work “keeps the viewer at a certain distance,” in a way that “replicates the process of a memory that draws us in but can only be partially accessed.”

The Patrick Robideau and Amy Greenan exhibit continues until April 9.