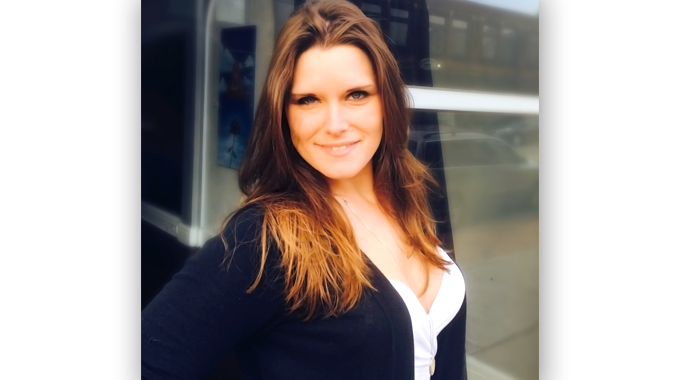 Thus far in her career, ArmCandy stands as Jessica’s most noteworthy footprint into the artistic community of Buffalo. In fact, it has almost become counterproductive in that Jessica has become the face of a collective that seeks to put other faces in the spotlight.

Based off of looks and personality alone, you wouldn’t expect to be in the presence of an artist, but Jessica Saddleson is one of Buffalo’s most prolific artists working today.  This may be in part to the fact that she was quick to recognize the business aspect of being an artist just as much as creating the works of art themselves.

“I hustled hard, man,” said Saddleson, age 33, “and I’ve been really fortunate to the point where I have had steady [paying] work.”

Jessica may not readily agree that she is art’s fortunate daughter, but she would be the first one to tell you that when you feel a good thing brewing, go into it with full force.

Born in 1982 in the Black Rock section of Buffalo, Jessica’s parents realized she had a knack for art from a very early age.

“I used to paint these giant Winnie the Pooh murals,” said Saddleson, “it was never just finger paintings.”

From there, it was her parents that pushed her to do more works of art, leading Jessica on a journey where the ultimate end goal was to be an artist.  She considered herself a good student at Campus West Elementary on the Buffalo State campus, got to learn about art advertising while at McKinley High School, and actually attempted a pre-med track at Purdue University.

However, it was a decision to return to Buffalo and attend Buffalo State that really was the key moment in Jessica’s pursuit of being an artist.

“I loved Buffalo State,” said Saddleson, “The quality of education I received from the artists who worked in the field really pushed me to be an artist.”

It was while she was receiving her degrees in Fine Arts and Art Education that Jessica familiarized herself with nearly every artistic medium (painting, ceramic, photography, etc.) as well as how to market herself as an artist.  Like the greatest lab practical you could think of, she immediately put what she learned about marketing herself into practice by obtaining her first paying artistic gig right out of college.

As a teacher, Jessica was invited to one of her student’s graduation parties at Lucarelli’s Banquet Center (in Lackawanna, NY), Jessica’s attention shifted towards the artwork Mike Lucarelli, the owner of the establishment, had already committed to the walls.  She wasn’t thrilled with it, to say the least, and made this known to Mike, himself.

“I asked him who did the artwork on the walls.  He gave me some name I don’t remember.  I then told him it was terrible,” said Saddleson, “he asked me if I knew an artist, to which I replied that I was an artist.  He came back with ‘Come in tomorrow and we’ll talk.’”

For those who have been astounded by the artwork on all four floors of Lucarelli’s, or at least have just seen it, Saddleson is responsible for all of it.  Even though it was a big project right out of the gate, Jessica remains humble, never opposed to learning new things always.  But this experience definitely allowed her to realize that just putting yourself out there can open many doors.

Since then, Jessica moved on to craft several big name projects around Buffalo, making a name for herself around the area.  She is most noted for her murals inside and outside of buildings (her most famous being three walls at Epic on Elmwood), but she is most famous and recognizable as one of the founding members of the art collective ArmCandy.

Going on five years strong, Jessica and her friend, Cove, began ArmCandy under the pretense that Buffalo artists really struggle to find exposure, that is, Jessica realized something distasteful about the art community in Buffalo.

“It’s weird.  Most galleries seem to have a prejudice against budding artists,” said Saddleson, “we should be encouraging one another, working together, critiquing each other.”

This idealist view of an art community is the driving force behind what Jessica seems to seek through the ArmCandy collective.  All works of art from any medium on any level can and will be exhibited, somehow, someway.

“If I meet an artist, I ask if they want to show off their work.  If they are interested, I work to find them a venue,” said Saddleson, “I would never turn anyone away, especially if I see talent.”

ArmCandy deals in all facets of art including, but not limited to, painting, sculpture, music, film, and photography.  If you want your piece of art to be exposed for all of Buffalo to see, Jessica, who is a self-proclaimed crowd-pleaser, will stop at nothing to help you.

Thus far in her career, ArmCandy stands as Jessica’s most noteworthy footprint into the artistic community of Buffalo.  In fact, it has almost become counterproductive in that Jessica has become the face of a collective that seeks to put other faces in the spotlight.

“The other night I was at Hardware and a girl approached me and said ‘I know you!  You’re ArmCandy!’” said Saddleson, both surprised that she was recognized as the face of ArmCandy, but pleased with the fact that, in the five years they have existed, Jessica has done so much with ArmCandy that the name is synonymous with her face.

Still, Jessica continues to keep herself busy finding ways in which she can promote the art scene in Buffalo even more than she has already done.  In more ways than one, this led to her latest venture as the curator at Paint the Town Art Gallery (74 Allen St.).  As curator, Jessica pretty much does what she does with ArmCandy, staging artworks in an interesting way that promotes an artists’ work.  But, even though Paint the Town is a more contained atmosphere than Armcandy, the job is no less demanding.

“I multitask as an art curator,” said Saddleson, “the job entails I select the art, organize the exhibit in the gallery, research artists, plus writing catalogue essays.”

As much behind the scenes work as she does, Saddleson’s artwork has been displayed at such venues such as Hardware on Allen, Ohm Lounge, Art Dialogue Gallery, and Madd Loco Tattoo.

Her own style is quite unique, one she wouldn’t even claim is genre defying, but rather lies both outside of genre and fits within every artistic genre.

“It’s all over the place, really,” said Saddleson, “I like to switch it up a lot, too.”

Switching it up seems to have become a staple of how Jessica likes to present herself as an artist.  She has thrown herself into painting quite a bit recently, but has really been anxious to release several sculptures she has been working on, ones that will be used in her July solo show.

“This one I’m working on for my upcoming exhibit are using pieces from a guitar that belonged to one of my friend’s boyfriend that she smashed,” said Saddleson, “[this is one way] I like to tell stories through my art.”

The stories Saddleson likes to tell through her art are those that resonate with her own life, her own experiences.  Although inspired to pursue art by her parents and her professors at Buffalo State, her largest sources of inspiration derives from her friends.  This can be seen when she draws and paints her most used subject: the woman.

“All the women I paint are pieces of myself and my friends,” said Saddleson, “all of my female characters have this beauty mark [pointing to the beauty mark on her face] and the rest are just parts of my friend’s faces and bodies.”

Saddleson cites famed Buffalo photographer Milton Rogovin as a major artistic influence as well as the concept of street art.  Much like a street artist, she creates art on the spot from merely looking at a wall and uses graffiti in a major portion of her work.  She also claimed that she would equate her style to that of comic book drawings.

Noting this, it was no surprise that one of the stranger periods of her artistic career (depending on how you look at art) was when she decided to use Sharpie for many new drawings and murals.  These Sharpie works can be seen at places such as Agave as well as being used in an ArmCandy show entitled “Groove Salad.”

“The Sharpie was something I picked up because of watching graffiti artists,” said Saddleson, but just because it is old school doesn’t mean it was a step backward for the artist, “as I evolve as an artist, I’m also trying to revisit things from the past.”

There doesn’t seem to be a potential halt in sight for an evolving artist like Jessica Saddleson.  There seems to be no peak for her, no top of the mountain, nor any bottom of the barrels either.

Immanuel Kant argued once that the artistic genius is one that creates their own rules, something Saddleson seems to exude whenever she is put to work creating various murals, paintings, or sculptures.  Even though she may seem like the most business minded of the artists you know, it is spontaneous sparks of creativity and visions that drive her to create these magnificent murals, paintings, or sculptures.

“When I get hired to paint a mural for a client, they sometimes like to tell me what they are looking for, but they aren’t the artist,” said Saddleson, “I listen to what they want, but in the end I just kind of do my own thing. They approve and let me continue.”

A creative mind never stops working and generating new ideas.  Just as well, an artistic mind has a worldview where any piece of anything is merely a blank canvas.  Saddleson is no stranger to thinking this way and it is something she is aware of and carries in her pocket for every piece of art she tries to create.

“This one time at Paint the Town, I had to do a live painting.  There I was, in front of a crowd with a blank canvas and my thoughts and art tools only at my disposal,” said Saddleson, “all of a sudden, I just had a feeling and created an entire painting based off of that feeling.”

With ArmCandy’s popularity, Paint the Town in its mere infancy, and a plethora of walls aching to become something vibrant and attention-grabbing, Saddleson has found herself at the forefront of one of the most underappreciated and ever-growing artistic communities New York has to offer.

But even though Buffalo’s artistic community is growing as such, Saddleson’s message to the young, up and coming artists is one the same philosophy she employed when she first opened her mouth at Lucarelli’s over ten years ago:

“Go for it, stay focused, be bold,” said Saddleson, “Make things happen, make your own lane.  Nothing’s just going to happen for you.”

Jessica Saddleson’s next solo show will be at Paint the Town in July.  Until then, you can find her murals displayed in places such as Agave, Epic, and Mad Loco Tattoo.