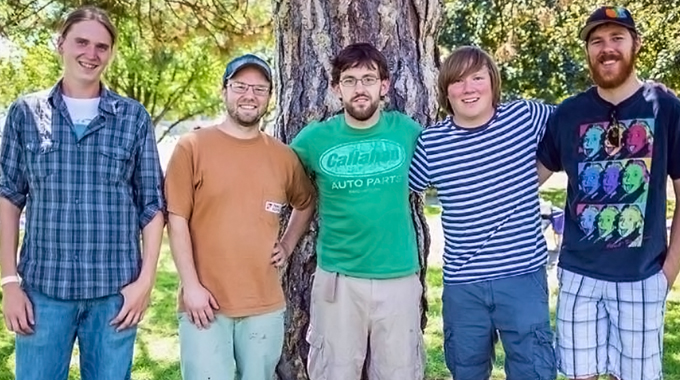 Quite possibly, Upstate New York’s best-kept secret is its vast and eclectic music scene.  From jam bands to rap groups to folk music to cover bands to jazz, every territory on the musical map is covered.  This has allowed bands to start experimenting to create new territories for them to get noticed.

Our Friends Band is one of the bands constantly trying to find their identity as a band while continuing to put out recordings and perform music all over Upstate New York.

“It’s like Josh Homme from Queens of the Stone Age said,” said Sean McNamara, lead singer and guitarist of Our Friends Band, “music is like feeling around in the dark and trying to find the right pair of breasts.”

Other members include Trevor Reynolds on drums, Everett Hook on trumpet/ trombone, Josh Russell on keyboards, and Taylor Ricks on bass.

Even though these five men have come together to attempt to form a coherent sound, the real story of Our Friends Band is promoting individuation through conglomeration.

Prior to forming Our Friends Band, Sean McNamara was a kid listening to his parent’s Allman Brother records and messing around with his father’s acoustic guitar in Troy, NY.  Meanwhile, nearly three hours away in Oswego, Trevor Reynolds was contemplating upgrading from the French horn in 4th grade to a drum kit.

“I got my first drum kit in 6th grade or some time in middle school,” said Trevor, “but it wasn’t until I declared a music major while at SUNY Oswego did I begin to get really serious into music.”

Sean attended SUNY Oswego, and in a kismet moment he wandered on to the gravel-laden beach where he met finger-plucking guitarist Taylor Ricks.  After two years of jamming out together, Taylor, Sean, and another drummer moved in together and started the “power trio” McVanRick, a conglomeration of the trio’s last names.  McVanRick played an open mic at Oswego’s Old City Hall where Trevor Reynolds was bartending and that night Trevor became acquainted with two members of his future band.

While at SUNY Oswego, Sean was in a minority of passionate musicians who decided not to pursue a degree in music or musical engineering.  Instead, Sean pursued philosophy, leading him to take his talents to the University at Buffalo to pursue philosophy further. Sean saw it as an opportunity to give his music a dimension rarely seen or heard.

“Music and philosophy definitely intersect,” said McNamara, “there’s criticism and subtext to be found within it.”

As for the philosophy behind Our Friends Band, it’s one that promotes individual free will, something Trevor Reynold believes is one of the pillars of OFB’s music.

“We blend a lot of jazz, funk, and rock music together, expressing every type of variety you can find in New York State,” said Reynolds, “it gives audiences something they probably never heard before.”

Our Friends Band keeps itself rooted at its home of Oswego.  However, the quintuplet will stop by Buffalo to play gigs at Milkie’s and Nietzsche’s.  They also enjoy playing larger venues such as the just recently passed Sterling Stage FolkFest and around areas such as Lake George, Syracuse, and Rochester.

Even though they have only been together for five years, the band has been quite prolific, releasing 3 studio albums and 2 live albums.  This led to them being nominated for Syracuse Area Music Awards on two occasions and although they lost out both times McNamara is able to find the humor in the situation.

“Releasing albums and being nominated are accomplishments in themselves, but we aren’t self-congratulatory,” said McNamara, “my goal is actually to resubmit for the next ten years in every category and just lose out.”

Our Friends Band is a band for the people, formed by modern-day Kerouac and Burroughs incarnates.  They promote an individualist culture through their music, trying to help people escape into a new world by means of an artistic medium.

“Music is creating a world, its escapism,” said McNamara, “I don’t believe in utopia or anything, but people need to be free to be who they are.”

Our Friends Band believes they have honed in on New York’s eclectic music scene.  However, even though they have been at it for almost five years now, they still believe there is vast room for improvement.

“I mean, Jerry Garcia once said the Grateful Dead sounded the best in the late 80s and they’d been together since nearly twenty-five years before then,” said McNamara, “for these first couple of years we’ve just been trying to play in sync with each other.”

Sifting for sound may sound like a daunting task that would keep the members of OFB busy full time, but astonishingly they all have separate lives, keeping music more as a side project.

Everett is in the midst of becoming an Engineer, Josh is a sound engineer in SUNY Oswego, Trevor remains a bartender at Old City Hall, Taylor works full time for Ontario Orchards landscaping, and Sean resides in our backyard at UB, working to obtain his doctorate in philosophy. He also plays a weekly gig in the Pizza Trio with Buffalo natives and musicians Ellen Pieroni and Tyler Wescott at Nietzsche’s every Wednesday.

Keeping in lockstep with their philosophy of individualism, OFB unites quite often through the power and necessity of music.

“I just really enjoy performing for different audiences and hope to grow as a drummer” said Trevor Reynolds of himself.  Of the band, he hopes that Our Friends Band can “keep continuing [their] success in New York State and try to push it across the country.”

Our Friends Band hearkens back to the days where musicians and artists promoted a sense of anti-establishment. They’ll burn dollar bills on stage in order to castigate capitalism, and they will screw around with any instrument they can grab and try to incorporate it into their already discernible sound. However, Our Friends Band knows that those days are behind them, despite efforts to recapture the ideas and ideals of their influences that came before them.

But perhaps it is not the failure of such ideas that captivates them, as they continually try to profess a new culture, recognizing that there are rules and regulations we should abide by, but this shouldn’t stop you from innovating or imagining past the realm of your rational capabilities.

“You can’t just create things ex nihilo, there are rules,” said McNamara, “[We] aren’t trying to bring down the system, we are trying to improve it.”

Our Friends Band doesn’t have a set schedule of shows, but if you’d like to hear more of them, their Bandcamp page is listed below and Sean McNamara performs every Wednesday at Nietszche’s with the Pizza Trio at 8 pm.