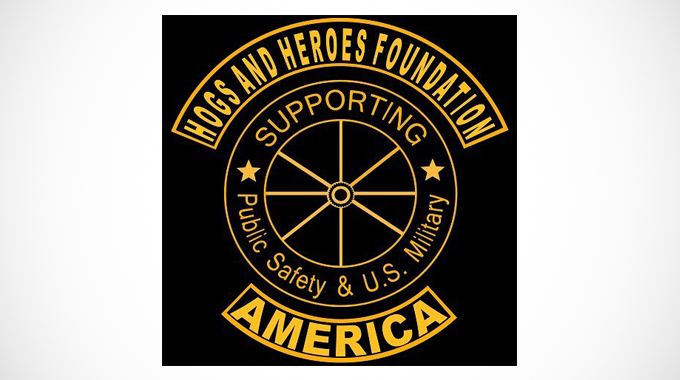 Big Al, a fixture at Hogs and Heroes events, appeared often on his bike with a child riding in back. This time Big Al could not attend. He was otherwise occupied – being held in a dank cell in the Niagara County Jail.

A curious happenstance that is perhaps worth noting  occurred during the Memorial Day parade in Niagara Falls.

It was a parade indeed and like all parades it had both a procession of people, marching or riding in floats, and those who watched them.

Some of the marchers were in costume or uniforms, like the Gordon Highlanders, with their bagpipes, in kilts, the Niagara Falls High School Marching Band, the Niagara Falls Police contingent and, of course, members of various military organizations.

Also in the parade both on motorcycles and on foot, carrying their banner, were members of Hogs and Heroes Foundation Inc. whose motto is “supporting public safety and the US military”.

The ‘Hogs’ part of the name refers to motorcycles and ‘Heroes’ refer to first responders and the US military.

They were in this Memorial Day parade to support the purpose of Memorial Day. Memorial Day, originally called Decoration Day, is a day of remembrance for those who have died in the service of the United States of America.

Curiously, as the Hogs and Heroes made up their part of this distinguished parade, there was one of their members missing rather conspicuously.

This was none other than Alphonso C. “Big Al” AKA ‘Thunder’ Cutaia.

Big Al, a fixture at Hogs and Heroes events, appeared often on his bike with a child riding in back. This time Big Al could not attend. He was otherwise occupied – being held in a dank cell in the Niagara County Jail.

Last March, Cutaia, 41, of Dorwood Park, Wilson, pleaded not guilty to two counts of predatory sexual abuse of a child and was ordered held in lieu of $100,000 bail set by Judge Matthew J. Murphy III.

Cutaia stands accused of sexually abusing a boy between 2006 and 2009, and a girl between July 2014 and March 1 of this year. Both were under 13 years old when the abuse allegedly began and it occurred in Wilson and Wheatfield, allegedly.

A man is innocent until proven guilty in the American legal system and Cutaia, who has no prior criminal record, may indeed have been falsely accused.

If he is convicted, he faces a long stretch in a penal institution and parole as a registered sex offender.

According to a source familiar with the situation, a spate of pictures of Cutaia at various Hogs and Heroes events with various children riding with him on his motorcycle have been quietly removed from Facebook and Meetup.com – a website for posting info and photos of community events.

It is unlikely that Cutaia could have removed these photos while sitting in jail.

It might be in the manner of rank speculation to suppose that certain members of Hogs and Heroes have sanitized various websites under their watch and control. But, really, if they did take down pictures they once proudly displayed of Cutaia on a motorcycle with children [it is said he loved to give rides to children] who could blame them? They are a fundraising organization after all and depend upon the goodwill of the people.

However, New York State Director of Hogs and Heroes, Rick “Big Bear” Gerace did make this response to our inquiry: “We are a 100% volunteer, non-profit organization and cannot dictate or control what a member does in their private/personal lives. Once these allegations became public record and we were informed of this situation, we took all necessary steps to protect our membership; the integrity, dignity and honor of our Foundation and are allowing the criminal justice system to do their investigation.”

While the pictures of Cutaia with various children have suspiciously disappeared from the internet, Niagara County Sheriff deputies are conducting an investigation based on allegations that there may be other victims.

Indeed, if Cutaia had two victims, there might be more; any number of whom may have been seen on photos that have now been removed from the internet.

If you have reason to believe you or your child may have been victimized by Cutaia or if you have information that might tend to exonerate Cutaia, please contact Niagara County Sheriff Department at  716-438-3393.