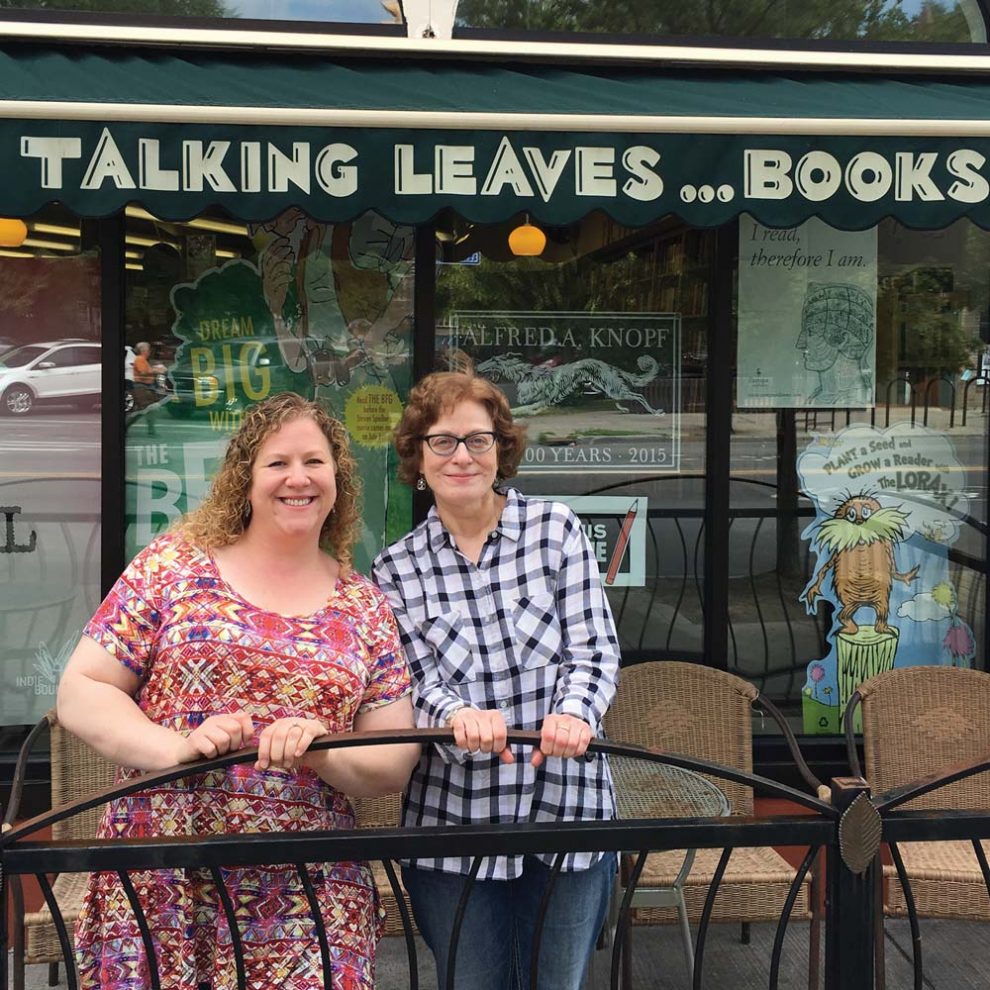 “This is my home. I was hired specifically for this location,” said Talking Leaves assistant manager Alicia Michielli. “Lucy, the store manager and I opened this store together. We put these shelves together,” she said, waving her hand towards the stacks filled with colorful books. Nestled between the historic Bidwell parkway and the continuously-developing Elmwood Avenue, Talking Leaves has been a home for many over the past 15 years. The tight knit community, quiet in-store atmosphere, and friendly staff have fostered this company into the only surviving independent retail bookstore in the city of Buffalo (there are a few used bookstores). And on July 9, 2016, this location will have its 15th year anniversary party.

These attributes describing Talking Leaves reflect the years of patronage from the customers who spoke them. When listening to Talking Leaves founder Jon Welch, his passionate interest in literature and – more importantly – his community was clear in his voice. “In the fall of 1974, a group of university students and professors set up a loan program to purchase the Main Street store in 1975,” said Welch when reflecting on the history of Talking Leaves. “Around 1998, most other independent bookstores had closed. We were the only ones left. We were contacted by a bunch of folks connected to the Elmwood Village association and the people who ran Café Aroma saying that the space next door is going to be available. ‘Everybody in this neighborhood wants a bookstore. Would you come, because we’ll raise money so it can happen.’ So we opened it in July of 2001. Now it’s 15 years and we want to celebrate!”

“The staff is an extension of our family,” said Michaela Schmidbauer, a manager at Café Aroma next door. Ms. Schmidbauer, who’s worked at Café Aroma for years, has watched Talking Leaves grow into a flourishing hub of the community. It’s very common for customers to walk back and forth through the shared doorway to purchase books and coffee. This was the original synergy between the two businesses that was envisioned. The Aroma staff will surely enjoy the celebration, as well, and should feel they are all a part of the success of both businesses.

“There is a difference between Talking Leaves and other stores,” said Michielli at the Elmwood location. “We ask the question ‘what will our customers find interesting?,’ not ‘will this sell?’” When anyone thinks of the Shop Local movement, Talking Leaves is at the top of that list. Jon Welch has always joined with other small independent businesses to inform the public of the great value of shopping local–more money stays in the community, add character to your city, benefit from expertise, support local jobs and entrepreneurship etc.

The customers and the community have kept the store running for the past 15 years because Talking Leaves is more concerned with providing literary value than turning a profit. “Being a bookseller is my calling, that’s my career, it’s what I want to do forever. It is a vocation,” said Michielli when reflecting on how she relates to Talking Leave’s commitment to serving the community well. “Seeing kids come in with their parents as babies and watching them grow up and recommending them books – it is a huge part of my life. I’m really lucky, luckier than most.” Only families or close family friends experience the growth and development of others around them. Talking Leaves has become an active participant in the lives of its patrons, and that is something we can all agree is unique.

Regardless of the coming celebration, and despite the success Talking Leaves has enjoyed over the past 15 years at Elmwood and 41 years at Main St., keeping the business alive was never without its tribulations. Founder Jon Welch explained, “The challenge of being in the book business has always been substantial. It’s always been a low margin business. When we started, our goal was to be a place that had the books that other people didn’t.” Welch describes their mission to make ethnic and LGBTQ voices more heard saying, “our goal was to represent the voices of people that traditionally were not heard in regular publishing or were buried. We wanted to create a place where people could talk about these things.” Talking Leaves on Main is also known for its extraordinary selection of poetry not found anywhere else.

When recounting past challenges you could see on Welch’s face how tiring it has been, “there was a lot of this thing you always see happening in this country. When something new happens we just think ‘go to the new, and dump the old.’ So in the late 90’s until about the late 2000’s, there was this huge boom in superstore development.” Welch continued with a touch of sadness in his voice, “we happened to be one of the 2,500 of the original 4,000 independent bookstores to survive the onslaught of the superstores, and the only one in Buffalo.

Welch explained that a good part of their survival was their approach to book inventory. Rather than have a large number of a few popular titles – bestsellers – Talking Leaves carried only a couple copies of a wide variety of books and genres that served many interests. Those carefully picked selections gained loyalty from customers who found they loved a bookstore that catered to their passions. “Because of the way we were founded and because of the kind of community connections that we’ve always had, we’ve always had a very loyal customer base.” Although Talking Leaves only had a 50% chance of survival – as did all independent bookstores during the rise of Borders, Barnes & Noble, and Amazon – they remain to celebrate a wonderful 15 years on Elmwood, and an incredible 41 years on Main Street.

Ms. Michielli provided a detailed breakdown of the celebration that is to take place on Saturday July 9 from 10am until 9pm. There will be live music, raffles, drawings, merchandise and books, children’s activities like book cover designing and bookmark crafting. Talking Leaves will be providing a storewide discount of 15% to anyone who visits, which for some items may also be added on top of the usual 10% members already receive. The store would like to fill the patio with musicians for the entirety of its celebration. They are still looking for some independent musicians to share their talents with the Talking Leaves community. The company cannot afford to pay each individual musician outright, but would absolutely provide discounts or gift cards to any musicians who might wish to pick up that next book of tunes (or anything else they might like).

When walking through the bundles of packed shelves and through the soft sun-lit yellow of the walls, one would never expect that Talking Leaves walks such a thin line to stay open, and has seen so much history. For a retail book store, they are in great shape. Supported by warmhearted neighbors and generous customers, Talking Leaves has found a home on Elmwood Avenue. However, in this modern digital culture, independent bookstores face their own Fahrenheit, 451. Alicia Michielli finished explaining, “we have all become activists. There is a threat to this thing that we love, this vocation, this place, this idea of an independent bookstore, so we have all become these sort of mini activists. Most people don’t think twice when they say, ‘oh, I’ll just get it on Amazon,’ and so it has kind of become our job to inform people of that.” Talking leaves: Elmwood has thrived with the support of the community for 15 years. As a community, let’s be sure to show our support for the little shop at the end of the street that has become a little part of all of our lives.