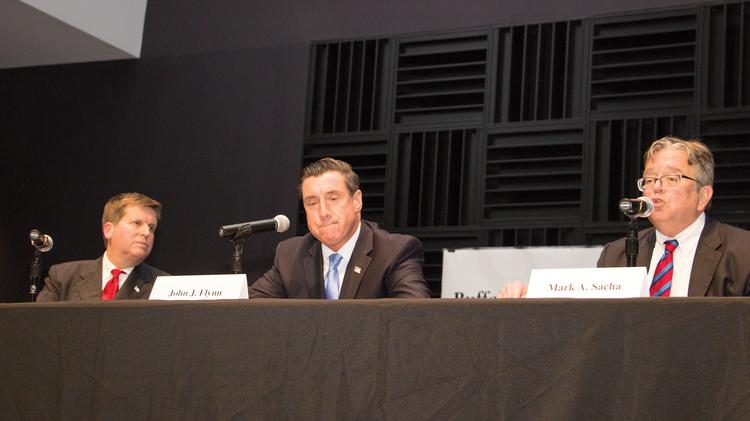 With only four days to go until the primary vote on Tuesday, the three-way battle for the all-important Democratic line for district attorney is fully engaged and the experts we’ve spoken to are finding it a very difficult race to handicap, many saying it depends on who is able to get their vote out in an otherwise lackluster local primary election.

Most see the battle as between Flynn, who is promising to restore public trust in the office which he says has been lost under Flaherty and his predecessor, Frank Sedita, and Flaherty, the career prosecutor with 20 years experience who says he has demonstrated his ability to take an effective and aggressive approach to resolving cases over the last eight months while serving as acting district attorney.  Sacha, who has said he wants to change the culture of corruption and overspending in the DA’s office, came to public attention by calling for the investigation of alleged election law violations by now-indicted political operative Steve Pigeon. Sacha held many top positions in the district attorney’s office before he was fired by former DA Sedita, a frequent target of his criticism.

“My first priority [if elected DA] will be to improve relations with local law enforcement,” said Flynn during an interview with Artvoice this week. “They need to have the trust and confidence that tough cases are going to be prosecuted, and that goes for the public. They can be sure that if I’m the district attorney, I will take on the toughest cases.”

As an example of prosecutorial backpedaling, Flynn, who has been endorsed by several major police unions, pointed to the now famous and still controversial hit-run Evans case that claimed the life of a handy man that originally led to the indictment of a suspect after an investigation by Evans town police and then no-billed in a second vote by the same grand jury, asked for by the DA’s office under Sedita.

In response, Flaherty says he has demonstrated his willingness to take on tough cases in his eight months in office that includes the new indictment in June of Gabriele Ballowe in the Evans hit-run death of Barry Moss in December of 2013.

The case had sparked heavy criticism of former DA Frank Sedita–including from Sacha– after a grand jury initially voted to indict Ballowe but when asked to vote again by the district attorney’s office, issued a no-bill.

“The evidence two years ago [against Ballowe] was not legally sufficient,” Flaherty said during an interview this week. But after he took over from Sedita, Flaherty says he urged law enforcement to re-investigate the case and the circumstances changed as a key witness changed her story, leading to the vehicular manslaughter charges against Ballowe and perjury charges against the witness. The Ballowe case is expected to go to trial later this year. The original grand jury proceedings remain under seal despite a challenge from Ballowe’s attorney.

Flynn has an extensive record of military service and currently serves as a commander in the Naval Reserve. He serves as an appellate attorney assigned to the Navy and Marine Corps Appellate Review in Washington, D. C. Flynn graduated with a bachelor of arts degree from Bowling Green State University and later received his law degree from UB Law School after leaving active duty after a two-year tour in the Navy.

In addition to serving as Tonawanda Town Attorney, Flynn also enjoys a successful practice as a personal injury lawyer and says if he’s successful in winning the district attorney’s office, he will hire “the best and the brightest” to serve the people of Erie County, with political considerations not a factor.

Flynn says he realizes there are many good people already serving in the DA’s office and does not plan to clean house if elected, only to make the kind of appointments he feels will help restore the public’s trust in the office. A total of 89 lawyers currently serve at the pleasure of the district attorney with another 70 employees also on staff, mostly from the civil service ranks.

Flaherty says if he’s successful in the primary and goes on to win in November, he will continue to work to move the office forward with a focus on his newly established and first-ever DA public integrity unit as well as pursuing domestic violence prosecutions and “working with law enforcement to reduce gun violence,” expressing concern with the number of illegal guns flooding the area.  And Flaherty says staff diversity is very important and that he wants a staff “that reflects the community that we serve,” citing recent promotions he has made as a step in that direction

Also, Flaherty says he will continue his work with his newly established animal cruelty unit that has already had some success, be even more proactive in working with community groups and block clubs, and attend stop-the-violence forums, saying “I see that as a way to learn how to better serve the public.”

Flaherty sums up his role as district attorney by saying he is dedicated to serving the people of the county. “This is more than a job, this is a calling,” says the veteran prosecutor. “This is what I do.”

Flaherty received his bachelor of arts degree from Notre Dame in 1987 and like Flynn is a graduate of UB Law School. Flaherty has received many honors, including the Morgenthau Award in January of 2014 that is bestowed on prosecutors whose professional accomplishments best epitomize honesty, integrity and commitment to the fair and ethical administration of justice.

While Flynn strongly denies politics will play any role in the way he runs the office despite receiving the party’s endorsement, Flaherty stresses his independence, saying it his independence that led the party to support someone else.

“I have the experience, and I know how things work,” says Flaherty, adding that he’s also capable of adjusting when adjustment is required.

Both Flaherty and Flynn are expected to have strong primary day get-out-the-vote efforts, with Flynn saying his ground game will include phone banks, door-to-door canvassing, robo calls, and union support to carry him to victory. Expect the same effort from the Flaherty forces.

Flaherty needs to win the primary to go on to the general election while Flynn has two minor lines and would have the Conservative line if he wins the primary against Treanor even if he loses to Flaherty in the Democratic primary.

With Democrats holding a significant enrollment edge in Erie County –276,813 to 146,502– the winner of the Democratic primary for DA next Tuesday will be a strong favorite to win the general election in November.

Something is rotten in the State of Denmark, and Hoyt Lake
Jacobs brings record of accomplishment to Republican primary