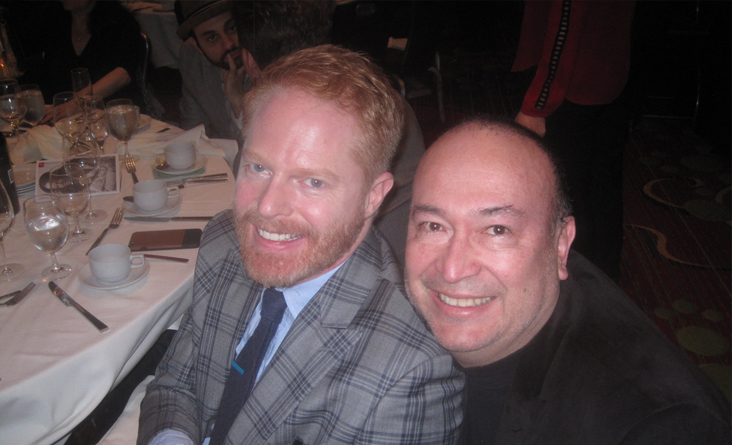 Broadway and TV star Jesse Tyler Ferguson (pictured above), best known for his role in TV’s Modern Family, spent his summer back on Broadway starring in the one man play Fully Committed. Ferguson made his Broadway debut in the 1998 revival of On the Town and later starred in The 25th Annual Putnam County Spelling Bee. Ferguson and husband Justin Mikita were recently honored at the Los Angeles LGBT Center’s 47th Anniversary Gala.

After a successful run with Donald Margulies’s 2000 Pulitzer Prize winning play Dinner with Friends, Road Less Traveled moves on to some darker stuff with Sam Shepard’s 1983 Pulitzer Prize finalist, True West. Directed by Scott Behrend, the production opens on October 28th, starring David Mitchell, Matt Witten, Robert Rutland, and Tina Rausa. The play is about the rivalry between two estranged brothers (Austin and Lee) who have recently reconnected. The 2000 Broadway production starred the late Philip Seymour Hoffman and John C. Reilly alternating in the roles of the brothers.

Broadway is up for a similar gimmick with the upcoming revival of The Little Foxes, in which Cynthia Nixon and Laura Linney will alternate the parts of Regina Giddens and Birdie Hubbard.

Up next at the Kavinoky, the remount of the popular fast-paced comedy, The 39 Steps, a spoof of the classic Hitchcock movie where four actors play 150 parts. Directed by David Lamb, the production will star Chris Evans, Kate LoConti, Christian Brandjes, and David Lundy, who also starred in the 2009 production. That version also starred Chris Corporandy, Jenn Stafford, and Robert Rutland. The 39 Steps opens on November 4th.

Speaking of Lundy, he will be kept quite busy in the upcoming weeks as he is set to star in the one man biographical play Give ‘Em Hell Harry! in which he portrays President Harry Truman. The play will be performed for two weekends beginning October 20th at the New Phoenix Theater on the Park. The show was written as a vehicle for famed Buffalo actor James Whitmore in 1975. Lundy, then a child actor, saw Whitmore’s performance and was inspired by it. Whitmore went on to star in the film version which earned him an Oscar nomination.

The Jewish Repertory Theatre opens its 2016/17 season with 4000 Miles, Amy Herzog’s 2012 Obie Award -winner which was also a finalist for the 2013 Pulitzer Prize. The company’s entire season is dedicated to Herzog’s work. Her plays After the Revolution, and The Great God Pan will be presented in February and April respectively. 4000 Miles opens on October 27th, directed by Saul Elkin, starring Marissa Biondolillo, Ellen Horst, Sara Kow-Falcone and Nick Stevens. Herzog will attend the opening night performance. The play runs through November 20th.

Niagara University Theatre will begin its season with The Macbeth Insurgency (Shakespeare Deconstructed). Adapted and directed by Doug Zschiegner, the piece is a contemporary take on Macbeth with a multimedia approach to Shakespeare’s themes. The production will run October 13th – 17th at the Leary Theater on the NU campus. 2016 is the 400th anniversary of Shakespeare’s death.

2016 also marked the 400th anniversary of Miguel de Cervantes Saavedra’s death. To commemorate both preeminent authors, The Humanities Institute at UB is presenting a conference, Object and Adaptation: The Worlds of Shakespeare and Cervantes, Act 3, on October 13th and 14th at UB’s Center for the Arts. All events are free and open to the public. For more information and registration go to www.objectandadaptation.wordpress.com

UB’s Department of Theatre & Dance will open its season with the jukebox musical Return to the Forbidden Planet which is inspired by Shakespeare’s The Tempest, and features several rock ‘n’ roll classics. Directed by Terry Berliner, with music direction by Alison D’Amato, the production will run Oct 27-Nov 26 at UB’s Center for the Arts Black Box Theatre.

Torn Space Theater will present its seventh annual costume ball and fundraiser, Prom of the Dead: Gilt, on Saturday, October 22nd at 9 p.m. in the ballroom of the Dnipro Ukrainian Cultural Center 562 Genesee Street. The dance party will feature DJs, live music, showgirls, and lots of glitter. Tickets are $20.00 in advance, $25.00 at the door. Go to www.promofthedead.com or to Talking Leaves on Elmwood.

Good luck and best wishes to Aisling O’Neill all the way from Buffalo to Ireland.  Aisling is nominated for an IFTA (Irish Film and Television Academy) Television Award for her performance in the show Fair City. The ceremony will take place in Dublin on October 7th. Aisling is the daughter of the late Chris O’Neill.