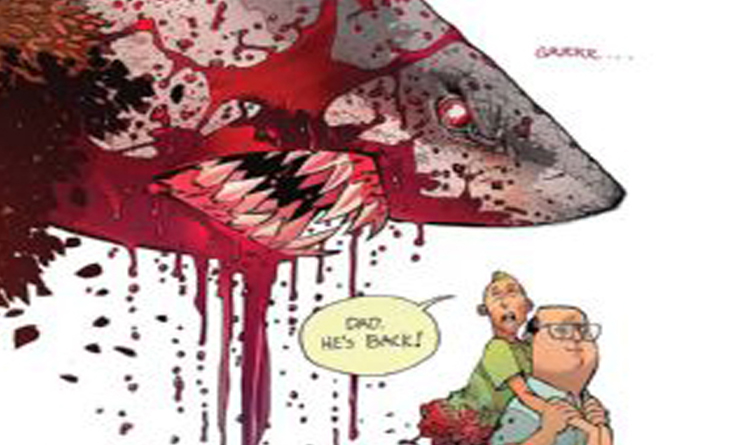 Hot on the heels of the popular Sharknado film series, GrizzlyShark returns to the woods seeking human flesh to munch on. Just like Sharknado, SeaBear & GrizzlyShark was a cult hit when the series originally debuted back in 2010. Perhaps the creators of Sharknado were inspired by the unique awesomeness of GrizzlyShark? The important thing to remember when reading GrizzlyShark is that the sharks live on land and the bears live in the water…they got mixed up! The bloody violence in GrizzlyShark is way over the top and meant to be humorous. Comparisons can be made in both the narrative and characterization of GrizzlyShark to Mad Magazine and Looney Tunes. Best known for his work on the popular series Invincible, artist and writer Ryan Ottley readily admits to those influences on his work for GrizzlyShark. The best part of the book is the inevitable showdown between GrizzlyShark and SeaBear. The fight reminds cult classic films like King Kong vs. Godzilla and Dracula vs. Frankenstein. The epic battle ends with a surprise twist. Something tells me both GrizzlyShark and SeaBear will be back very soon in all their terrifying and gory glory. I found GrizzlyShark to be very funny and quite entertaining. 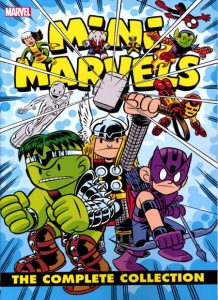 By Chris Giarrusso (Author and Illustrator)

Imagine the childish yet satirical humor of Calvin and Hobbes. Now combine that with the Marvel Universe. Chris Giarrusso, also known for his comic G-Man, dared to do just that. The collection of short stories and comic strips follow a large portion of Marvel’s characters, often using Spider-Man and Hawkeye as their punching bags as poor Spidey tries to keep his sanity with his job as a paper boy and Hawkeye’s “friends” give him the cold shoulder due to his lack of powers (and, according to Iron Man, his lack of brains). Thor gets teased for his Asgardian speech patterns (taking on the role of the culturally ignorant “foreigner”) and Johnny, AKA the Human Torch, refuses to “flame off,” resulting in everything he handles for too long catching on fire. Mini Marvels likes to throw in jabs directed at our culture (“Machine Man! They’re after your advanced robot computer technology!” “Who is it this time?” “Bill Gates and Microsoft!”) in classic satirical fashion. Giarrusso’s writing and art style are similar to Chris Eliopoulos and Marc Sumerak, co-creators of Franklin Richards: Son of a Genius. Actually, if you’re into Calvin and Hobbes, read both; they complement each other.