Dance Gavin Dance is an experimental/post hardcore band from Sacramento. They will be performing songs from their new album “Downtown Battle Mountain.”  The Contortionist is a progressive metal band from Indiana with dazzling keyboard play and edgy vocals.

The Dark Star Orchestra continues the Grateful dead concert experience. They have performed together for over 15 years and over 2000 shows. Rolling Stone Magazine says “The band pays fanatical attention to detail.”

IGOR AND THE RED ELVISES

Bandleader Igor Yuzov and the Red Elvises are a Russian American band that performs funk rock, surf, rockability, reggae, folk rock, disco and traditional styles of Russian styles of music. They will performing songs from their latest album, “Bacon.”

The Marcels are a Pittsburgh-based Doo-Wop band who is most famous for their classic version of the Rodgers/Hart classic, “Blue Moon.” The song soared to #1. The Marcels will have you dancing in the aisles to all your doo wop hits.

Giant Panda Guerilla Dub Squad is an American jam reggae band from Rochester founded in 2004 Their album “In These Times” peaked at #5  and their previous album “Steady” peaked at #1 on the Billboard’s Reggae Album Charts. The band is known for their terrific live shows.

Combichrist’s sound is a combination of head-pummeling electronica, Jay Siegel is the lead singer of the Brooklyn Doo-Wop band the Tokens whose most famous song, “The Lion Sleeps Tonight.” Former members of the Tokens include Neil Sedaka.  . 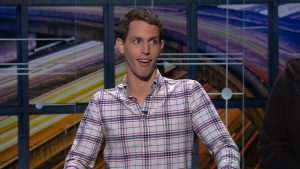 Los Angeles stand-up comedian, Tony Hinchliffe, is a sharp-tongued and quick-witted comedian who is the staff writer for the Comedy Central Roasts. Tony is also the host of his own show and podcast “Kill Tony.”

GRAPHIC TRAFFIC
NEWS OF THE WEIRD