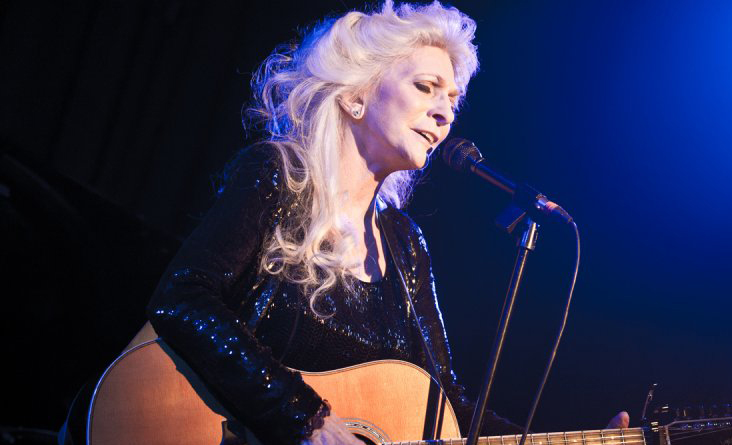 A CONVERSATION WITH JUDY COLLINS

Tonight, Thursday, Dec. 1 at 7:30 p.m. WNED-TV Buffalo will Broadcast “Judy Collins: A Love Letter to Stephen Sondheim,” recorded at The Boettcher Concert Hall in Denver, Colorado. Collins, who is in Buffalo for the event, will take the audience through Sondheim’s remarkable treasure-trove of music, interweaving stories of Broadway with personal anecdotes and songs from her career.

Collins has enjoyed an interesting history with Stephen Sondheim, and has the distinction of having recorded the only Sondheim song to reach the Top 10 on the pop charts with her 1975 recording of “Send in the Clowns” from A Little Night Music.

I note that so many songs associated with Collins’ remarkable career from Leonard Cohen’s “Dress Rehearsal Rag,” to the Kurt Weill / Bertolt Brecht song, “Pirate Jenny” from The Threepenny Opera either are from shows or are reminiscent of show tunes.

“Why do you have such a close connection to music for the theater?” I ask. “Are you a theater goer?”

“I do go to the theater,” answers Collins. “I see about a half dozen shows a year. I saw Hamilton. I saw In the Heights. I saw Falsettos this year. I like Guys and Dolls. I saw Bloody Bloody Andrew Jackson with my young nephews and then later, when both of them were in school, one of them was at Vassar and I saw him do Bloody Bloody Andrew Jackson. I liked it much more than I did on Broadway, actually. It goes very well with young performers! But I’ll tell you what I think of your question. I was raised on Rodgers and Hart and all the songs from the best shows. My father was a singer and radio personality, and these songs were in his repertoire for the radio, and I learned them all. When I was eleven years old I sang, ‘Someday, my prince will come!’ So I think I have show songs built into my genetic code!”

Delighted that Judy Collins has just sung “Someday My Prince Will Come” from Disney’s Snow White and the Seven Dwarfs for me, I suggest that she might consider doing “Judy Collins: the Disney Album.”

“That’s a good idea! I think I should do that, honestly I do! That would be wonderful!”

The occasion for this conversation, however, is Collins’ trip to Buffalo to promote her Sondheim program.

“I’ve just done a whole Sondheim show for PBS with orchestra,” she explains, “doing all the songs I didn’t get my hands on before. I’ve been working for 25 years to get this done, and finally I got a green light from PBS. I am very happy about it. It is so exciting to sing these songs – everything from ‘Anyone Can Whistle’ to ‘Liaisons,’ to ‘I’m Still Here.’ I just had the best time. These are great songs, and it is wonderful to get into them and to do them the way I always wanted to. That’s why I will be in Buffalo.”

“I have a new CD out called ‘Silver Skies Blue’ that is songs that I wrote and sing with Ari Hest, who is a young up and coming artist. He wrote a song called ‘Strangers Again’ that I recorded on my 2015 album [of that title] that has all those duets with Jackson Brown, Willie Nelson, Michael McDonald, Jeff Bridges, Don McLean, Jimmy Buffett, a whole bunch of singers! And then, of course, Ari and I sing very well together and we have a wonderful time!”

Collins and Hest played a highly praised engagement at New York’s Café Carlyle. He will also perform with her on her next album, currently in production.

“I am working on a new album of my own songs,” reveals Collins. “I just recorded five of my brand new songs yesterday with a wonderful band that included Ari and Jerry Leonard, Doug Yewell, Zev Katz, and Russ Walden, my pianist. We’ve all played together on my last two albums. I am sort of in a new phase of writing my own songs again. And of course, it has great meaning for me because Leonard Cohen died very recently. He and I had a very long friendship. He was and is a great part of my life. It was Leonard who called me one day and said, ‘It’s very wonderful what you’ve done for me by performing my songs, and I’m so grateful, and don’t stop doing it. But I want to know why you’ve never written any songs of your own!’ That question really changed my life, because I started writing my own songs immediately. This new album is a continuation of that.”

And so, Buffalo welcomes the ever evolving Judy Collins back to Buffalo, this time to promote her Sondheim program for PBS. But be on the lookout for her new CD, “Silver Skies Blue,” her next CD of original music, and who knows? Maybe a Disney album!