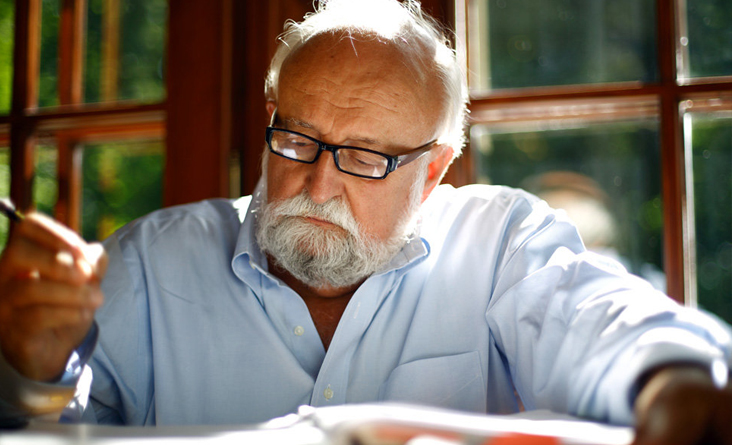 Buffalo Philharmonic Orchestra music director JoAnn Falletta will be in Kleinhans Music Hall for the M&T Classic series concerts taking place this Saturday at 8pm and on Sunday at 2:30pm, but perhaps for the first time in her long tenure as BPO music director, she will be not on the podium, but rather in the audience.

When Maestro Falletta last returned to Poland in May 2015 to conduct the Kraków Philharmonic, she was invited to visit Krzysztof Penderecki, the greatest living Polish composer, at his home. “Although he may look somewhat formidable, he is really very sweet and kind, and so is his wife,” says Falletta. “When I invited him to conduct the BPO, he promptly agreed, and then asked if he could conduct the Dvorak Symphony No.7 on his program. While that was of course fine with me, I asked him if there was some work of his that he wanted to include on his program. He asked me if I had an exceptionally talented violinist and cellist in the orchestra, and I replied yes, certainly, thinking of our concertmaster Dennis Kim and our principal cellist Roman Mekinulov. Penderecki then told me that he had composed a concerto for violin and viola a few years previously, but that he was not altogether happy with the results and that he wanted to adapt the work for violin and cello. I consider it an astonishing privilege and an honor to have Krzysztof Penderecki lead our orchestra”.

Penderecki composed his Double Concerto for Violin and Viola in 2012 as a commission from Vienna’s Musikverein, for a piece marking the bicentenary of that venerable Viennese musical society. It was premiered in that year in the Musikverein by the Bavarian Radio Symphony Orchestra, under the baton of Mariss Jansons, with the soloists Janine Jansen, violin, and Julian Rachlin, viola, to whom the work is dedicated. The German premiere occurred a few weeks later, where the work was described as “As a 25 minute concerto which begins as a soft conversation between the two instruments trading soft flageolets and pizzicatos back and forth. From tenderness it moves quickly to heated passion and after a while the full orchestra joins the two exposed soloists and their acerbic-yet-lyrical lines. It’s a melodic piece, technically challenging to both soloists, and often with pedal points in the low strings of the orchestra where the melodies go to the winds, especially the flute”.

The BPO has a long history of performing Penderecki’s music, albeit with one very long, 32 year gap between performances of any of his works. Former music director Lukas Foss started the ball rolling with a 1965 performance of the composer’s incendiary Threnody for the Victims of Hiroshima, the work that established Penderecki internationally. Then, in 1968 Foss programmed the Capriccio for Violin, with Paul Zukofsky as soloist along with the orchestral piece De Natura Sonoris, with both pieces being recorded by Nonesuch. In 1969 the Penderecki pieces, paired with works by Iannis Xenakis, became the first major label album released by the BPO. While the BPO offered a repeat performance of Threnody in 1983, no other works by Penderecki were programmed until Falletta led a performance of his Concerto for Horn and Orchestra, “Winterreise” in 2015 that featured the orchestra’s principal French horn player, Jacek Muzyk, so it is especially gratifying that the composer will be on the podium at Kleinhans for the American premiere of his own work.

It turns out that Penderecki has a sense of humor, according to BPO concertmaster Dennis Kim, who performed for the composer both in Hong Kong and with the Finnish Chamber Orchestra. “The work that I played had a huge, massive cadenza” says Kim. “After I played it the first time, I looked at Penderecki, and he had no reaction. I then played it a second time, and still no reaction. I was starting to get worried, so I asked him if it was OK. ‘Yes’, he said, ‘when I do not make a comment it means that I like it’. I liked his very dry sense of humor”.

The last time that a major composer conducted his own work at the BPO was in 1980, when Aaron Copland, who was then about the same age that Krzysztof Penderecki is now, led a program devoted solely to his works. For anyone who was at that concert it remains an indelible memory. A similar once in a lifetime experience can be enjoyed at this weekend’s BPO performances.

Engelbert Humperdinck’s beloved fair-tale opera Hansel and Gretel had its premiere on December 23 in Weimar Germany in 1893, under the baton of Richard Strauss. While the composer wrote some of the most radiant music imaginable for this opera, it has remained as something of a mystery as to how this rather gruesome tale came to be indelibly associated with Christmas, but in some ways the opera is the perfect antidote to the almost obligatory good cheer of the holiday season. Who among us, after all, would not want to be able to able get over our worst nightmare by shoving it into an oven and then closing the door? By the way, there will be ginger bread cookies for all afterwards.