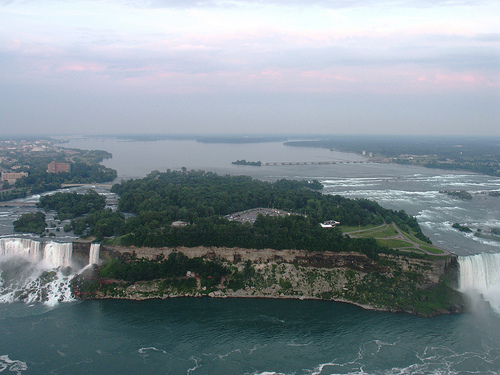 By Tony Farina
The governor’s Goat Island lodge plan, rolled out during one of his State of the State speeches in Amherst last month, is coming under strong attack from Niagara Falls legislators.
Gov. Andrew Cuomo said it is time for a “world class lodge” on Goat Island, something to create a year-round tourism destination, but three of the Cataract City’s county legislators will sponsor legislation next week opposing the governor’s plan as the wrong investment in the wrong place, urging Cuomo to focus instead on downtown economic development.
The legislation, co-sponsored by Minority Leader Dennis Virtuoso (6th District, including the state park), Legislator Jason Zona (5th District) and Legislator Owen Steed (4th District) would oppose “further commercialization of the Niagara Reservation State Park,” and would ask the governor to cease any efforts to develop a “lodge hotel” anywhere in the state park.
In addition, the legislation asks that the state redirect staff resources to assist with economic development efforts outside the state park in conjunction with the City of Niagara Falls Comprehensive Plan.
Environmentalists have already spoken out against building a lodge on Goat Island as not being a good fit with the nature preserve setting envisioned by Frederick Law Olmsted, the park’s designer.

Virtuoso says he has received many calls from residents opposing the governor’s proposal as well as from hoteliers downtown who are concerned this lodge would be unfair competition, adding “we don’t know if this lodge would be paying property taxes or bed taxes.  We’ve worked too hard rebuilding out downtown to go this route.”   Being on state land, the lodge would be tax exempt.

“I have many concerns with this proposal,” said Zona in a press release, adding the state and Olmsted opposed commercialization of the park 130 years ago, restricting such efforts.
“We have a comprehensive plan  for downtown and this falls nowhere under that,” said Zona.  “All of our joint efforts should be to develop the areas outside of the park and grow our local economy.”
Steed said “it is important that all of our local officials, whether city or county, stand in opposition to this proposal.”
The legislators expect a protest at next Tuesday’s City Council meeting against the lodge plan, and both the council and the legislature will discuss the plan at their sessions next Tuesday.
Local historian Paul Gromosiak called Cuomo’s proposal for a Goat Island Lodge an insane idea.
“He [Cuomo] needs to read about Olmsted’s vision when the state park was established in 1885,” said Gromosiak in the Niagara Gazette, “and how Goat Island was to be kept as much as possible in its native state.  If they want another hotel, let them build it downtown.”

Click here to post a comment
‘Buffalo Olmsted’ rolls over for Cuomo, Delaware North $$$
The Prosecution of Rus Thompson for voter fraud is unprecedented in New York history