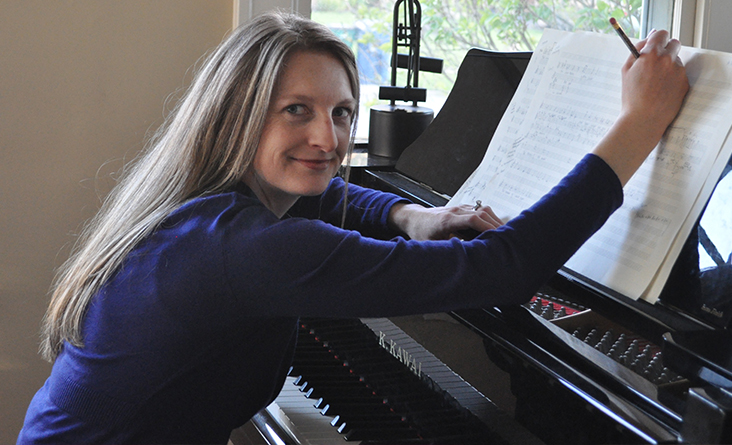 When UB professor of trumpet John Nelson, and Cuban-born violinist Lazara Martinez Nelson founded the Pausa Art House on Wadsworth Street in Allentown several years ago, they opened the only commercial establishment in Western NY, where in addition to hearing the very best local jazz, world music and off-beat contemporary popular music groups, you might also be able to hear some of the best local classical musicians perform unique programs not available in any other venue. The uniqueness of Pausa on the local music scene as the only place to hear all these vastly different forms of music continues to this day, and will be celebrated anew on Thursday March 16 at 7pm when the Buffalo Chamber Players (BCP) devote an entire evening to the music of Caroline Mallonée.

Mallonée, who moved to Buffalo with her husband, UB associate professor of piano Eric Huebner in 2010, has been a composer-in-residence with the Buffalo Chamber Players since 2014. Her numerous compositions, most of them commissioned, have been in demand across the country. Locally, her compositions have been frequently performed by groups as diverse as the Camerata di Sant’Antonio, the Friends of Vienna, the BCP, and the Buffalo Philharmonic Orchestra.

A recent highlight of her career was the BPO commission for an expanded version for full orchestra, of her original version for string orchestra, of Whistler Waves for Cello and Orchestra, one of her many works which draws inspiration from science, art, technology and literature. The premiere was very well received in November of 2015 and featured BPO associate principal cello Feng Hew as soloist under the direction of music director JoAnn Falletta. Many of those who attended that performance hope that it will be soon released on a CD, either on Naxos, or on the BPO’s house label.

Mallonée is recognized nationally as an important composer of choral music. After garnering national attention through “The Carolers at My Door,” which won a contest on “A Prairie Home Companion” when she was 14, Mallonée has been commissioned and performed by choirs across the country. She is a longtime member of the Vocális Chamber Choir, which has performed several of her choral works, and featured her Da Pacem Domine in their recent appearance at the Cambridge (UK) Music Festival.

The Pausa program will feature the world premiere, by contralto Suzanne Fatta and pianist Susan Schulman of the composer’s Songs from The Pillow Book, a set of four songs inspired by texts taken the book of the same name written by medieval era Japanese court lady, Sei Sh?nagon.

As Caroline explains: “The songs were commissioned by Suzanne Fatta, a friend and contralto I sing with in the Vocális Chamber Choir.  It was Suzanne’s suggestion to look at The Pillow Book. What is so striking about The Pillow Book is how contemporary it feels, even though it was written a thousand years ago. I love the lists that are included: “pleasing things”; “rare things”; “elegant things”; “surprising and distressing things.”  In the section I set, Sei Sh?nagon describes what time of day she prefers during each season.  I immediately was drawn to this passage for its imagery and form; it seemed inherently musical to me. I read three different translations of the passage (by Ivan Morris, Ken Mogi and Mark Jewel) and then made my own version. The ideas and images are retained, but I substituted my own words: ones I would like to set; ones I would like to sing. Most notably, I added characters to the four poems: I imply a full, bustling household in the first poem (winter), she is alone in the second (spring), there is a romantic encounter in the third (summer), and the last (autumn) is about a group of friends. I am so excited about the premiere of this piece, and I’m grateful to Suzanne for asking me to write the piece, and for pointing me to The Pillow Book back in 2013”.

“I’m also excited about the rest of the program” says Caroline, “which will feature my music for strings. As you know, I play the violin, so these pieces feel quite personal, since I wrote many of them at my instrument. String Tunes is a huge undertaking for me, an evening-length work that is still in progress, and much of the collection will be performed at Pausa. I’m excited to have nine of the solo pieces performed in the same evening with the two trios and the string quartet. The string quartet, The Butterfly Effect, has never been presented with other pieces from String Tunes, and I think the juxtaposition will highlight the musical material of the quartet – the fiddling references, and the fact that it’s in just intonation, a tuning system based on the harmonic series”.

Tickets at the door: $7/ $5 students with ID. Information: www.pausaarthouse.com

A student of Stephen Manes at UB, Michael Serio recently returned to Buffalo to accept the position of music director at the Unity Church after spending more than three decades on the music scene in Boston. He will offer an intriguing program mix in his first area recital since 1981, at the Unity Church, 1243 Delaware Avenue on Sunday March 19 at 3:30pm. The program includes a selection from the Op.126 Bagatelles by Beethoven, Schumann’s Arabesque in C major and Brahms’s passionate Rhapsody in B minor, as well as selections from Debussy’s Estampes and Granados’s Goyescas, and Chopin’s beloved Nocturne in D-flat major, Op. 27, No. 2. There is ample free parking behind the Church and a reception will follow the performance. While admission is free, donations are gratefully accepted.

The Return of the Native by JAN JEZIORO
Tango with boléo