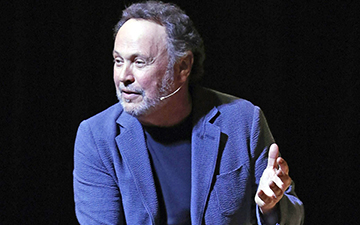 Award-winning comedian, actor, producer, writer and director Billy Crystal rose to fame with blockbusters movies “When Harry Met Sally”, “City Slickers” and “Analyze This.” Crystal is one of the greatest comedians ever to appear on Saturday Night Live performing a hilarious selection of impressions including Sammy Davis Jr., Fernando Lamas, Prince, Howard Cosell and Mohammed Ali. Bonnie Hunt is a stand-up comedian, actress, director, producer and voice artist who has appeared in films, such as Rain Man, Jumanji, Jerry Maguire, The Green Mile and Cheaper By The Dozen. She has lent her comedic voice on such animated hits, such as A Bug’s Life, Monsters Inc., Toy Story 3, Zootopia and Cars 1, 2 and 3.