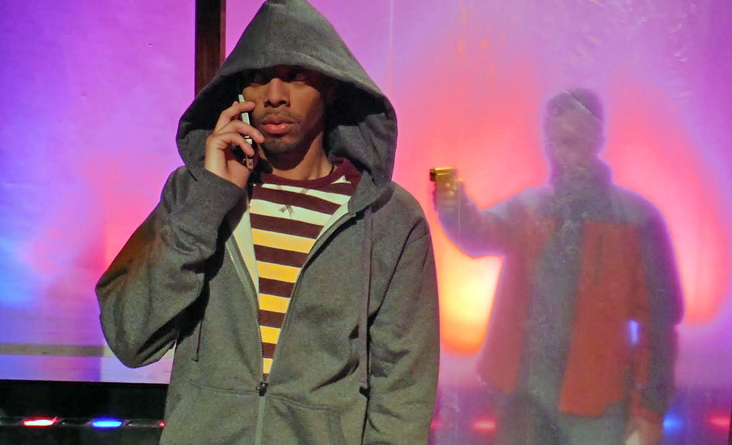 Playwright Gary Earl Ross shares with many playwrights of our time, the influence of television. His scripts reverberate with deliberate echoes of such shows of the 1950s and ‘60s as “Perry Mason,” “The Untouchables,” and “Alfred Hitchcock Presents.”  Ross artfully subverts the formulas of those television dramas of yesteryear to examine the societal changes that have occurred in the years since they first aired.

In his new play, “The Trial of Trayvon Martin,” Ross takes a court case that commanded the attention of a nation in 2013, and imagines what might have happened if white George Zimmerman had died on that fateful night in 2012, and 17-year-old African American teenager, Trayvon Martin, had gone on trial instead.

As I watched the opening night performance of the play, presented by the Subversive Theatre Collective at the Manny Fried Playhouse, I was reminded of another script by Mr. Ross, his 2005 play, “A Matter of Intent.” That play won both the Artie Award for New Play, and the Edgar Award from the Mystery Writers of America.

For “A Matter of Intent,” Ross invented a charismatic and memorable character in Temple Scott, a female, African American defense attorney, working in Kennedy-era Buffalo, New York.  At the time, I wrote that Ross used the well-worn clichés of television courtroom drama in ways that subverted them winningly. The obstacles that Temple Scott faced as a black woman in a white dominated society hampered her dedicated pursuit of truth and justice, and yet each new challenge offered her the opportunity to use her superior intellect and uncanny insight. Moreover, the playwright powerfully used his heroine’s sex and race to demonstrate how different life experiences can give us different insights.

Some of what I wrote more than a decade ago could also be said of Ross’s current script.  Once again, he imagines an African American woman attorney, determined to overcome societal prejudice to exonerate her client.  Again, “The playwright intersperses the chronological telling of his story with flashbacks that reveal the characters’ memories to be flawed, or which show episodes outside of any of the living characters’ knowledge. [E]very character harbors a past.”

I recall, in particular, a moment from “A Matter of Intent,” in which defendant Mae Lou McKitchen, played by Rahwa Ghirmatzion, testified that her monstrous and abusive Uncle Lucky was the nicest man anyone could ever meet – an assessment that a disturbing flashback had just revealed to be entirely false. Similarly, in “The Trial of Trayvon Martin,” in a flashback, we watch as “George,” beats his wife, intentionally punching her in the stomach, rather than striking her face, so that her father will not detect the abuse.  Moments later, we watch the abused woman testify that George was a gentle man and a loving husband.

While the structure of these scenes is similar – flashback, followed by sincere, but false testimony – the impact is opposite.  In the earlier play, a defendant is unwittingly testifying against her best interest.  In the new play, the defendant’s false testimony helps push an innocent teenager toward his doom.  The former scene is imbued with sad irony; the latter seems disingenuously manipulated by the prosecution.

Also, while both plays provide vivid central characters in the roles of African American women serving as defense attorneys, I found Temple Scott to be a character of far greater complexity and attractiveness. Lorna C. Hill’s artful performance was a highlight of Buffalo theater-going and suggested that this play could easily serve as the pilot for a series. Temple Scott understood where courtroom race relations meet persuasive diplomacy. By contrast, Imani, as played by Shawnell Tillery, seems to ignore the advice she so pointedly gives to young Trayvon that he needs to present a friendly and persuasive wholesomeness to the jury, while she stridently and combatively lectures the courtroom.  While we can entirely understand her sentiments, her strategy seems terribly flawed and ill-fated.

Lawrence Rowswell gives a committed and effective performance as conflicted Detective Hooks, a man who seems convinced of Trayvon’s innocence.  By contrast, as “Anita,” the prosecutor, Kunji Rey is asked to portray a woman who seems morally bankrupt in her determination to gain a conviction against a boy who is clearly innocent. This is a weakness in the balance of a play that pulls so entirely from the headlines. In real life, the defense was using every trick to save a man who was guilty. In this fiction, the prosecution is using every trick to condemn one who is innocent. The impulses are not equivalent, and it could be formidable to hear the private justification of the prosecutor more fully articulated. The provocative challenge that is laid down by Rowswell’s character is never given adequate consideration.

The crux of the argument seems to lie in reminders from the judge, played by the recorded voice of Anna Kay France, that the dead victim is not on trial. Certainly, in the real life trial, the success of the defense was largely due to the degree to which they managed to put the focus on young Trayvon Martin.  The playwright amplifies the inequity of this formula with a reminder from Imani that so often in our society, to be human is to be white, and to be anything else is to be suspect.

A final interaction between prosecutor Anita and defense attorney Imani is notably Hitchcockian in its seemingly deliberate inadequacy.  Imani states her reasons for continuing to pursue justice, clearly and articulately. Anita slips away un-scrutinized. After what she has witnessed, and the role she has played in getting a patently unjust verdict, it seems impossible that this character really has no notion of what motivates her colleague across the courtroom, or that she would not question, or at least rationalize her own motives. With the inevitable outcome of this play obvious from the beginning, to command anything more than our sense of outrage, this play needs to explore these issues.

The seventh installment in Subversive Theatre’s “Black Power Play Series,” “The Trial of Trayvon Martin” has evident timeliness and topicality, and a title that might attract national interest. The play revisits the Trayvon Martin story in an engaging, if painful way. At every point, dares the audience to face our recent history and the state of race in our culture. Still, should this play earn popularity beyond Buffalo, I hope it might do so in a way that will attract attention to “A Matter of Intent,” which I would gauge to be an even stronger play.

Subversive Theatre has given the play a handsome production, directed by Kurt Schneiderman with a set by Chris Wilson that casts haunting shadows, and a sound design by John Shotwell that serves to anchor the proceedings in the background sound of falling water.

Brian Brown projects the reckless naiveté of adolescence as Trayvon. Kunji Rey gives steady drive to the underwritten character.  Rick Lattimer gives a sadness and a certain tragedy to his performance as misguided and unstable George. Leon Copeland, Bittany Noel Bassett, Micheal Mottern, and Kajana Stover complete the world of the play.  Performances continue through May 6th.

ON THE BOARDS: What’s playing on area stages
A ROUNDUP OF COMING PLAYS by Anthony Chase