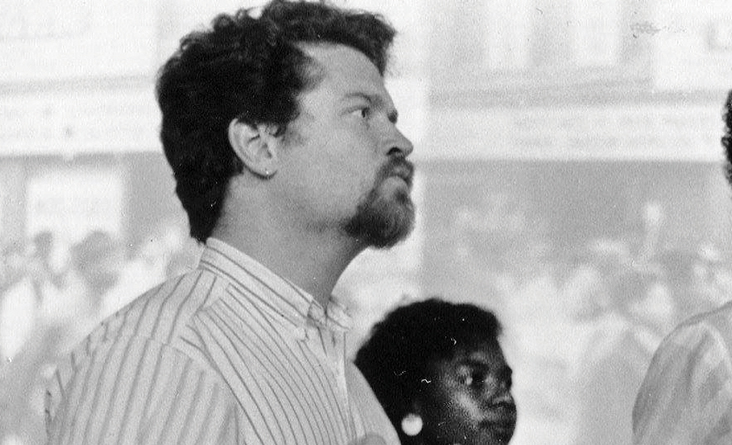 Director, actor, writer, activist Thomas Dooney died on April 27th.  Friends and family gathered at Alleyway Theatre for a memorial on May 2nd.  The room was packed.  Speakers included actors Stephanie Bax and Josie DiVincenzo. Lorna C. Hill recalled Tom’s important role in the founding and growth of Ujima Theatre Company. Saul Elkin recalled Tom’s college days and their long years of friendship. Randall Kramer read a message from Theresa Quinn, who recalled being one of Tom’s High School theater students.  Folk singer Leah Zicari performed “Before Stonewall,” a song from “The 10 Percent Revue,” one of many landmark LGBT productions that Tom directed for BUA in the early ‘90s; Tom ‘s sister-in-law Molly Mustonen performed his favorite song, “Somebody Somewhere” from Frank Loesser’s “The Most Happy Fella.” Joseph Donohue III performed “Danny Boy.”  Drew Ludwig, pastor at Lafayette Avenue Presbyterian Church fondly talked about being “pastor to a non-believer,” and closed out the service with a moment to remember Tom and then to release him.  The event ended with sustained applause in memory of a remarkable and loving man.

Everybody laughed. Everybody cried.

I have lost one of the greatest friends of my life.  A message sent by writer-performer-man about town, Ron Ehmke evoked much of the essence and importance of Tom Dooney.  We proudly share his words here.  – ANTHONY CHASE

I’ve been trying to remember exactly when and where and how I first crossed paths with Tom Dooney, but it’s impossible after so many decades. It seems like he was simply a part of my life almost as soon as I moved to town in 1982—as if he just came along with the city as part of a package deal, like ten cent wings and occasional lake effect snowstorms.

Starting perhaps in the late 80s, Tom played very important roles in both Buffalo’s theater and queer communities, helping each of them get established during the period when they were really beginning to take off. He was one of the first people to support my own work as a 20something writer and performer. He also helped enormously to spread the word about Hallwalls’s Ways In Being Gay festival in its early days, when we really needed the attention—positive attention, I mean, not the kind of coverage that the right wing radio station and protestors on the street were giving us. He believed in the festival, in the notion that gay culture in Buffalo could amount to more than just a handful of bars but actual art and music and film and most of all theater. The legendary playwright and performer Holly Hughes loved his tongue-in-cheek description of her in the Artvoice of the early 90s as a “sapphic supervixen” so much that she worked it not just into her press kit but into the show as she toured it around the country, at least until Jesse Helms and his fellow humor-impaired Republicans denied her an NEA grant. So in his own small way, Tom even played a role in the battle against federal funding for the arts that continues to this very day. (Thanks, Tom!)

I referred a moment ago to “crossing paths” with Tom, and now that I think of it, that’s a very apt expression, because neither of us had cars in those days, and we were always bumping into each other on the street, a pair of overworked and underpaid artsy fartsy pedestrians. I remember his confident stride and his big, theatrical voice yelling my name every time he bumped into me on Elmwood.

Buffalo being Buffalo, we both took all kinds of career paths over the next thirty years, and they crossed in all kinds of ways. I remember reviewing a production of his for the News, for instance, but I also remember the acting role he played in The Buffalo Project, a 1990 collaborative performance about the riots on the East Side after the assassination of Dr. King, in which a star-studded cast of local African American and white actors (including Tom, Lorna Hill, Manny Fried, Fortunato Pezzimenti, Renee Armstrong, Laverne Clay, and Diane Pickering Hummert, among others) revisited that painful era and dared to say out loud thoughts most of us keep to ourselves. That’s one of the most important roles art, and especially theater, can play in our lives, and Tom was absolutely willing to commit himself to the task. I commissioned that performance from the visiting theater artist Robbie McCauley in my Hallwalls days, making that the one time I was able to pay Tom in actual cash for his work.

Then there was his long connection to Ujima, and after that to other theaters in a dizzying range of capacities onstage and off, to say nothing of WNED, various local publications, and his work organizing some of the early Pride parades. Those of you who are younger than Tom and me may not realize how damn much work that was: Not just the month or two it takes to pull off a parade on a sunny Sunday afternoon, but the years of effort before and after that afternoon to convince the people of a blue collar city far from the Stonewall Inn or the Castro that lesbian, gay, bisexual, and trans lives were WORTH a parade. That takes energy and passion, and Tom had both of those. I freely admit he rubbed some folks the wrong way over the years, but at least he had the guts and the commitment to rub up against them at all. It’s so much easier to sit alone in your room or your closet and complain about how boring your life is than to take the route Tom took: to do something about it, for yourself and for the community as a whole.

Everybody loves to talk up “the New Buffalo” these days, but Tom played a big, if usually unsung, role in making the Old one such a special place to live and work. I’m thankful he took the time, and thankful that our paths crossed.