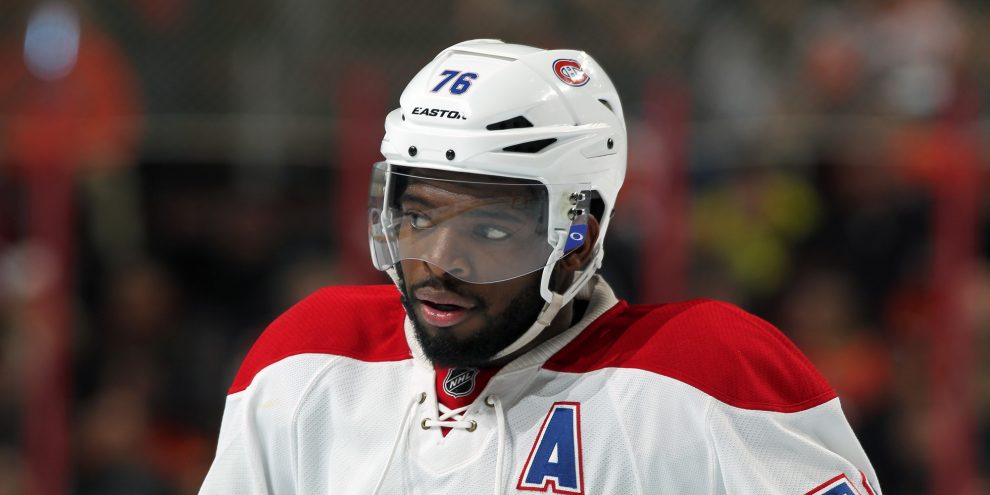 If everyone is tired of the entire anthem issue and the social and cultural divide which is tearing the country apart, one needs to look no further than the example set by the Nashville Predators’ P.K. Subban last week.

Subban is recognized as the most high profile black player playing in the NHL, so naturally, when the displays of activism started ratcheting up across NFL sidelines last month after President Donald Trump through kerosene on the entire issue, all eyes turned to Subban and how he might react as speculation grew that the anthem protests could spread to the NHL.

Subban immediately quelled any thoughts, saying he would “never kneel” in protest during the playing of the USA national anthem, and the team’s media department immediately confirmed that position.

Nonetheless, the discussion carried on into the Predators’ locker room, a roster of players that has four Americans, and their coach, Peter Laviolette, confirmed that the entire team would continue to stand and participate in the playing of both the U.S. and Canadian anthems. In fact, only two NHL players, Tampa Bay’s J.T. Brown and San Jose’s Joel Ward, have publicly stated that they may offer their support in joining other athletes in protesting racial injustice and inequality.

So as the controversy continues, all eyes still turn to Subban and how he might react, or change his position on the issue moving forward. And Subban did, in fact, make a major move.

Creating what’s called the “Blueline Buddies Program”, Subban invites a member of the police and a guest, along with a member of the inner city community, to join together for a night of hockey, complete with pregame and postgame activities along with game tickets. From the Nashville Predators media relations department:

“During every Nashville Predators home game this season, Subban will host his new P.K.’s Blueline Buddies program, bringing together a member of the Metro Nashville Police Department and their guest with a mentor or representative from a local organization and an underprivileged youth. Subban takes care of the game tickets, dinner and meets with the group prior to and after the game to lift their spirits and give them a few hours to forget about everything on the outside.”

The program got its kickoff last Thursday in Nashville, and the team reported via its website news platform that the program looks to be a success.

Prior to the Predators game against Dallas at Bridgestone Arena, four guests – Metro Nashville Police officer Clint Gilleland and his son, Wyatt, and Nashville Inner City Ministry mentor Robby Thompson and Dekaylin Hayes – served as Subban’s Blueline Buddies, getting the chance to meet the defenseman prior to the game, and then again after the final horn. Subban chatted, snapped photos and signed autographs for his guests, creating a night they’ll never forget, while also forming an impression that left Thompson and Officer Gilleland thoroughly impressed. “It’s not just people doing this, doing that, [Subban] stepped up and said it was something he wanted to do, and that speaks a lot about his character,” Thompson said. “To take time away from his pregame routine to meet us, it’s pretty amazing.”

Subban and his family are no strangers to racism, even growing up and playing in a more liberal and accepting Canadian society. The Subban family boasts of three boys playing professional hockey. Besides P.K., brother Malcolm is a goaltender with the Vegas Golden Knights and youngest brother Jordan plays minor league hockey in the Vancouver Canucks system. There were times they were the only three black players on the rink at Toronto’s Herb Carnegie Arena, where they often played.

Subban has already hosted eight fans from both sides of what would at first be thought of as an inseparable divide, and likes what he sees so far. “In this world, there are bad people and there are good people,” Subban said. “We can either choose to celebrate the bad ones all the time, or we can celebrate the good ones. I think it’s important to build people up and to make people feel good.”

Subban is hoping his example will be picked up by other players, not just in the NHL, but in the NFL, NBA and Major League Baseball, stating emphatically that athletes and sports stars have the power to change the world for the good by bringing people of different viewpoints together, and helping to put an end to the toxic environment of fear and distrust. “The concept is about building bridges in our community and not being divisive,” Subban said. “I think that’s the most important thing of all.”

With the World Juniors Championships in Buffalo just about two months away, the marketing push is on for the first ever outdoor game in the tournament’s history, featuring the USA vs Canada on Friday, December 29 at 3PM at New Era Field. Whoever made the decision to schedule the game in the afternoon on a work day really needs to have their head examined. Taro can only speculate that the time was set to allow fans of the eight European teams participating to be able to watch the game live on TV back home at a decent hour.

Nonetheless, if you plan on going, best to grab tickets soon. And Taro’s advice, based on experience from the 2008 NHL Winter Classic – skip the pricier lower level seats and grab the best available in the 300 decks. Cost is $45 plus fees, you’ll be guaranteed a decent view of the playing surface, and chances are you wont have to stand throughout the entire game.