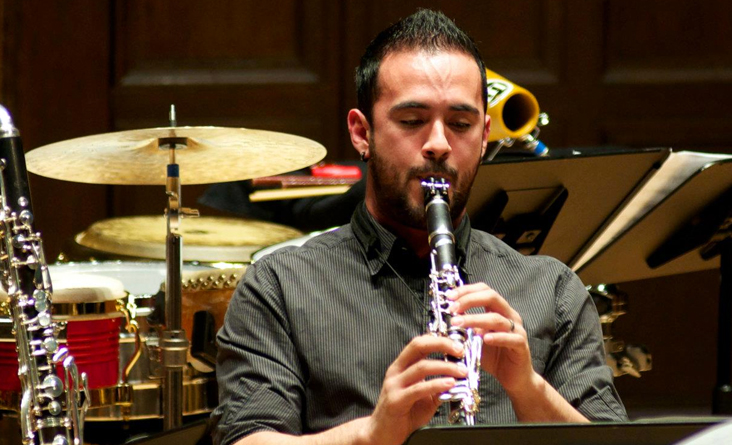 UB to confer an honorary doctorate degree on the composer

On Tuesday October 24 at 7:30pm, the Slee Sinfonietta will offer a program in Slee Hall on the UB Amherst Campus honoring the composer Bernard Rands. Born in England in1934, Bernard Rands, won the Pulitzer Prize in 1984, and a Grammy Award in 2000, and he served as a composer-in-residence for the Philadelphia Orchestra for seven years under Riccardo Muti. A major figure in contemporary music, Rands has received commissions from the New York Philharmonic, the Boston Symphony Orchestra, the Los Angeles Philharmonic, the National Symphony Orchestra, the Eastman Wind Ensemble, and the Cleveland Orchestra, and has had more than a hundred published works and many recordings, Rands has been guest composer at many international festivals and Composer in Residence at the Aspen and Tanglewood festivals, and is the Walter Bigelow Rosen Professor Emeritus at Harvard. Bernard Rands has been a long-time friend of the Center for 21st Century Music, and has visited often as a faculty composer to the June in Buffalo Festival. The State University of New York will award Rands an honorary doctorate degree in a separate luncheon ceremony during his visit to UB.

Two works by Rands are on the program: “now again”- fragments from Sappho, composed in 2006, and his 2014 work Folk Songs. Matthew Chamberlain will conduct the Slee Sinfonietta for these performances, which feature soprano Tiffany Du Mouchelle. The Sinfonietta has performed “now again”- fragments from Sappho several times since 2009, most recently in 2011 and it has become something of a favorite among local contemporary music enthusiasts. The works consists of four sections: ‘Invocation’, ‘Convocation’, ‘Consummation’, and ‘Introspection’ with texts by the ancient Greek female poet Sappho. “The melodic lines and the harmonic language are somewhat simpler than that normally associated with my music”, Rands has commented, “for the basic reason that Sappho was a singer (musician) who sang her love poems to the accompaniment of a lyre. I cannot conceive of a post-2nd Viennese sound world (of whatever kind) which would be suitable for such love poems”. Folk Songs, for female voice and eight instruments was commissioned by the Tanglewood Festival, where the work was premiered in 2014. “Rands considers his Folk Songs to be semi-autobiographical”, one critic has noted, “in that each song originates from countries that have inspired him throughout his compositional life. The work is a collection of nine songs, each in its original language from Bavaria, England, Ireland, Italy, Mexico, USA and Wales”.

Costa Rican born clarinetist Adrián Sandi has been a frequent guest performer at UB as a member of the NYC-based Ensemble Signal. He will be joined by pianist Eric Huebner for a performance of UB-based composer David Felder’s Coleccion Nocturna for clarinet and bass clarinet, piano and 4-channel tape. The work, which consists of five variations on a musical subject from Rocket Summers, his earlier work for solo piano, is loosely based on the Pablo Neruda poem of the same name. While the complete, original theme never appears, fragments of it permeate the texture of the tension developed in the five contrasting variations of the technically demanding work, with what has been described as “an extraordinary directness”.

Eric Huebner and Christopher Guzman, pianos, will be joined by percussionists Tom Kolor and Steve Solook on vibraphone and marimba in what may well be the area premiere of Italian composer Luciano Berio’s 1973 work, Linea. While the innovative, but always immediately accessible music of Berio (1925-2003) used to be programmed fairly often in decades gone by, even by the BPO back in the 1960’s and 1970’s, it is rarely performed locally nowadays. The one notable exception was the performance at Kleinhans of several of the composer’s extraordinarily challenging series of virtuoso works for solo instruments, composed under the name Sequenza. The audience was seated on the main stage of Kleinhans, where several UB faculty members, including cellist Jonathan Golove, pianist Eric Huebner and violinist Yuki Numata Resnick, among others, gave performances that are still talked about. Linea is the first work that Berio composed specifically for dance, but as his publisher notes “It certainly can be programmed as a purely musical piece. For long stretches, each of the two pianists plays one-handed, frequently in unison with the percussion instruments. But even when the pianists play four-hands and Berio uses chords, the music retains its delicacy, thanks to the composer’s preference for the high register. This is crystalline music – or music like icicles”.