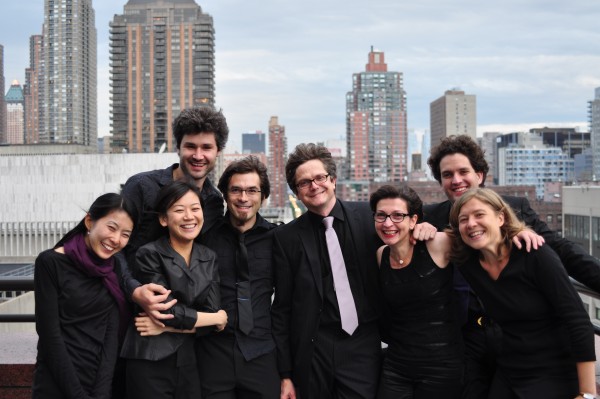 On Wednesday November 8 at 7:30pm, the Center for 21st Century Music at the University of Buffalo will host a concert by the Ensemble Linea in Slee Hall featuring the world premiere of Jeu de Tarot, a new violin concerto by David Felder. A State University of New York Distinguished Professor, and the Birge-Cary Professor in Music Composition, Felder who has also served as the longtime director of the June in Buffalo Festival, as well as the director of the Center for 21st Century Music, is the person most responsible for maintaining the reputation of UB as a creative center for contemporary classical music originally earned by Lukas Foss and the Creative Associates back in 1960’s.

Irvine Arditti is beyond question one of the very finest violinists on the planet in the world of contemporary classical music, and he offered an intriguing preview of Jeu de Tarot when he played a few movements of the work at this year’s June in Buffalo Festival. “Irvine is a one-of-a-kind genius”, says Felder, “he is a historic figure with a tremendous impact on contemporary composition and performance beginning in the 1970’s. And I am unbelievably fortunate that he has been my dear friend for around thirty years. We collaborated closely on my three quartets for the Arditti Quartet, but that collaboration pales in comparison with what he has given in the process of making this piece. He has been up to his elbows digging in and helping me write the music I wanted to write, and making the result challenging, satisfying to play for him, and we hope, meaningful for others. It is impossible to imagine how a soloist could give more to a composer than what he has done in this circumstance. We communicate nearly every day (email/FaceTime from his office with his violin in hand); he is full of questions, we find opportunities, he makes great suggestions. Of course, he has also written a guidebook for composers – but that is only the very beginning of his involvement”.

Asked about the origins of Jeu de Tarot, Felder says “J.P. Wurtz, the conductor of Linea, and I, discussed my writing a new work for them going back several years. We eventually decided on a chamber concerto and I naturally suggested that we involve Irvine as my longtime collaborator. As to the specific subject matter for the piece, of course that was left to me. The subject matter grew from my interest in the Tarot as a kind of philosophical machine, not in any usage as a card game, or other method of application that may be more closely akin to reading tea leaves, or entrails for auspicious signs. Very specifically, the wonderful Russian mathematician and mystic P.D. Ouspensky detailed many interesting applications and some history of the cards in a two-part essay he wrote and published in 1919, revising it again in 1929. In part two, he created what he called pen-pictures, short and very poetic texts imagining an encounter with each card of the 22-major arcana in a particular array. These pen-pictures connect beautifully with alchemical stages of transformation, as but one of many examples – there are many others – that can be discovered by the curious”.

When asked about any possible connection to Jeu de cartes, a ballet by the legendary choreographer George Balanchine for which Igor Stravinsky composed music in 1937, Felder replied “Of course the title is some winkage toward Stravinsky, but only in the title – there is no other referent present at all. I would say though, that Stravinsky’s usage of short forms within larger structures is something that I’ve always found compelling. I elected to write seven movements – and each of the movements is a musical response to one of Ouspensky’s pen-pictures. In other words, I selected my own array of seven – the soloist is in the foreground of each of the imagined scenarios, and he is experiencing each change of state in the individuation journey. The seven movements are not played attacca (without pauses), but I do hope that a variety of pauses between movements can be articulated. For example, between “The Juggler” and “The Fool”, I’ve asked for only a brief pause in the score”.

“The work may be around twenty-seven minutes long”, says Felder. “The arrangement of the seven movements results in a musical form which is quite unusual, particularly for the ultimate “heroic’ musical format, i.e. the concerto. There remain two other sets of seven – I hope that I might write two more large works that will complete the three cycles of seven, plus one, that comprise Ouspensky’s small, but very profound pen-pictures; we hope for this opportunity! I am grateful to LINEA and Irvine Arditti and the work is dedicated to these musicians, and as always, it is deeply gratifying to present the work under the auspices of the Center for 21st Century Music here at UB”.