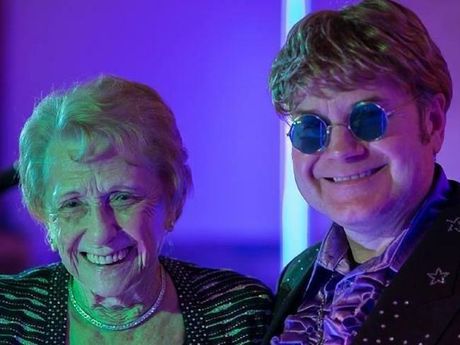 Three weeks before her death in December, Sir Elton John’s mother, Shelia Farebrother, 92, changed her will, and left most of her $950,000 estate to Bob Halley, 71.  Halley is Sir Elton’s former assistant, who 10 years earlier was central to the estrangement between Sir Elton, 70, and his mom.

The rest of her estate went to Sir Elton’s half-brother, Frederick Farebrother, and his mother’s friend, Deborah Woodward.

Mrs. Farebrother did not entirely cut her famous son out of her will. She bequeathed to Sir Elton two ceramic urns and family photos.

Her will reads: “I give to my son Elton John free of all taxes my two Batignani blue/gold urns and my photographs of mother in uniform and grandfather in uniform.”

The headlines imply Mrs. Farebrother intended to smite her son by disinheriting him:

Elton John’s late mother stiffs him in will – Page Six

However,  the notion that it was her intention to snub her son out of a few hundred thousand dollars might be a hasty conclusion. According to published reports, Sir Elton is worth around $500 million.

Here is a brief overview of events:

One day, Sir Elton telephoned his mother and ordered her to cut off all contact with two of their oldest friends, Bob Halley and John Reid, with whom he had fallen out. Bob had been Elton’s driver turned personal assistant, whom he had fired after more than 30 years. Reid had been his manager seeing Sir Elton rise to super stardom.

When Sir Elton asked his mother to “drop” Halley and Reid, she, then 83, refused.

She said she told him, “I’m not about to do that …  Bob is like a son to me. He has always been marvelous to me and he lives nearby and keeps an eye on me.”

Sir Elton, his mother recalled, flew into an expletive-filled rant. “He told me I thought more of Bob Halley than I did of my own son.”

“I said to him, ‘And you think more of that f***ing thing you married than your own mother’….  Then to my utter amazement, he told me he hated me. And he banged the phone down. Imagine. To me, his mother,” Mrs. Farebrother recalled.

Sir Elton later said of his mother: “I don’t hate her, but I don’t want her in my life.”

Fred became even more ill and I think he just hung on thinking that Elton would come to see him and he never did. Fred had been Elton’s stepfather since he was about 15. The three of us went through everything together. We helped him to make it in any way we could. When he was working with his first little group Fred used to run him to different places in the evenings in the car, even though Fred was having to work during the daytime, too. But he loved him. You do these things, don’t you, for those you love? …We only tried to do everything to help him. Fred idolised him and he was so upset, you know, that he didn’t even bother to come and see him when he was in the hospital. But clearly Elton wasn’t worried about him; he wasn’t worried about me, either.

When Fred died, Sir Elton did not attend the funeral.

Mrs. Farebrother blamed the estrangement on Sir Elton’s husband, David Furnish, who she said attempted to take control of all aspects of her son’s life.

She told the Daily Mail:

It’s pretty obvious if anyone thinks about it. Elton didn’t even fall out with Bob [Halley] really. The relationship ended abruptly. Everybody was got rid of all of a sudden. That’s what happened and everybody has gone — me included. Everyone who used to be invited to the parties doesn’t get invited any more . . . and we know who is behind that!” …  It appears all they are interested in these days are people with wealth and fame. …. There are none of his old loyal friends around — they have all been dropped. … Bob was like a brother to Elton, they got on, they had the same sense of humour, they travelled around the world together for over 30 years….

Oh yes, it’s hurt me. It’s the way he spoke to me. You know, things I never thought he’d ever say to me, that he hated me. …  all this time I haven’t had as much as a Christmas card, a birthday card or a Mother’s Day card. Nothing.

On her 90th birthday party, Sir Elton did not appear. He was performing at Caesars Palace in Las Vegas for reportedly $470,000 per night.

Mrs. Farebrother knew her son would not come to her party. She hired an Elton John impersonator to appear to entertain her 80 guests. As some observed, there could be no more poignant symbol of a mother’s broken heart.  The party, Sheila paid for herself, but was organised by her old friend Bob Halley. The party started at 4 pm and ended after midnight. She danced to all her favorite Elton hits.

She told the Daily Mail

Paul Bacon was the absolute image of Elton. He must have studied him in every possible way, all the actions and moves and the sound of his voice, the way he spoke, the way he looked. The whole hall thought at first it was Elton walking in, then they thought he was looking rather young! He got a standing ovation. We had kept it a secret and everyone was taken aback. People just gasped. Then everyone was crying because of me, I suppose, and knowing the situation that has existed. …  I’ve got over all the hurt of those seven years. I’ve got over all the nasty things and the hurtfulness. And really, Furnish doesn’t want to be with me and I certainly don’t want to be with him… I’ve had all the upset and crying and the worrying and the nastiness. I’ve got over it now and I’ve got a nice life. And I just hope [Elton’s] as happy as I am.

Shortly after her party, Sir Elton sent her white orchids.

After her interview with the Daily Mail, where the public learned for the first time the reason for their feud, Sir Elton announced he was reconciling with her.

According to the Daily Mail

“One of his most famous songs is the emotional ballad Sorry Seems To Be The Hardest Word. But it would appear Sir Elton John, 68, has mustered up the courage to apologise to his mother Sheila Farebrother, 90, after publicly announcing an end to their eight year feud.

Marking the passing of her 90th birthday, the iconic musician told the Daily Mirror on Friday: ‘We are now back in touch.

‘Out of respect for my mother’s privacy, I have always shied away from speaking publicly about our relationship.

‘However, I can say that we are now back in touch and have been so since my mother’s 90th birthday.’ It was the flamboyant musician who made the first approach earlier last year, when he sent Sheila a large bouquet of white orchids for her milestone birthday.

In April, Sir Elton spent time in intensive care with a bacterial infection after falling “violently ill” on a flight to the UK from Chile. Facing mortality himself, he may have rethought his relationship with his mother and found time to send her a message, albeit not a private one:

On Mothers Day, Sir Elton tweeted a public message to his mom: “Dear Mum, Happy Mother’s Day! So happy we are back in touch. Love, Elton.”

They were not actually in touch much however. During the last year of her life, Sir Elton and his mother visited each other twice, but she never saw his children, according to a source who told People Magazine:

“She never met his children, due to her hostile relationship with Elton’s husband, David Furnish. She went to his house in Windsor, England, for lunch …  and the kids were kept in a separate part of the house and did not meet her.

On Nov. 10, 2017, Mrs. Farebrother changed her will in favor of Halley. It is not known if she informed Sir Elton of the change.

Sir Elton saw his mother for the last time on Nov. 27.  He told The Sun, “I saw her a week before she died and thought, ‘God, she’s pretty feisty, she’s going to last for a few months’. A week later she was dead. It really shook me.”

On the day she died, Sir Elton tweeted to his fans: “So sad to say that my mother passed away this morning. I only saw her last Monday and I am in shock.  Travel safe Mum. Thank you for everything. I will miss you so much. Love, Elton.”

Two days later, Sir Elton dedicated his classic hit Your Song to his mother during a concert in Germany.

At the show, Sir Elton said, “I’m glad to say she passed away peacefully, with no pain, maybe sooner than she should have done… I was thinking how I can pay tribute to her tonight and what song I should choose. Well this next song I wrote at her house or her apartment. I can remember every single minute of writing this song…, so this is a song I want to ­dedicate to her. And it’s taken me from nowhere to somewhere. So thank you, mum.”

[On the evening of March 2, Sir Elton, during a concert in Las Vegas, dedicated a rendition of the song “Don’t Let The Sun Go Down On Me” to his 14 year old cocker spaniel, Arthur, who died that morning.]

Sir Elton performed at her funeral, held at his estate in Windsor. Although it was a ‘private ceremony’ Sir Elton told The Sun about it, including the role he played.

“We had a beautiful private ceremony for her in the chapel at Woodside — where my grandmother died, where her ashes are scattered. It was just family and there was a cremation the next day. I wanted to have a private ceremony, and it was a beautiful religious ceremony. I sang, and I did a eulogy, and it was a lovely farewell. It was lovely that we did reconcile because otherwise?.?.?.?life’s too short.”

Tomorrow your friends will gather separately to say their good byes. I’ve chosen all the music so everything will be just right.”

Thank-you for bringing me into the world and for all that you have done for me. Love, Elton #RIP.

In late January, Sir Elton announced he will quit touring – in three years [2021]  – to spend more time with his family.

“It will be the last time that I’m touring and travelling the world, because my priorities have changed,” Sir Elton said. “My priorities now are my children and my husband and my family.”

Last week, the will of Mrs. Farebrother was made public. Sir Elton’s former assistant and chauffeur Bob Halley got much of his mother’s less-than-$1 million estate. Possibly she knew her son did not need the money. Possibly Halley did.

Maybe two urns and family pictures meant more then money to Sir Elton. Maybe it was more important that he got the chance to reconcile with his mother before it was too late.

It’s not clear what to make of a man who saw his mother only twice in the last decade of her life. Or a man who says he wants to spend more time with his family, then announces he is going on a three year, worldwide tour.

Or why it would be anything other than generous [and not a snub] for his mother to bequeath to Halley, who saw her many times during the last years of her life.  Despite Tweets and singing – for his dog and his mom – despite giving her financial support – Sir Elton ignored his mother in the closing years of her life. His love was like a candle in the wind.